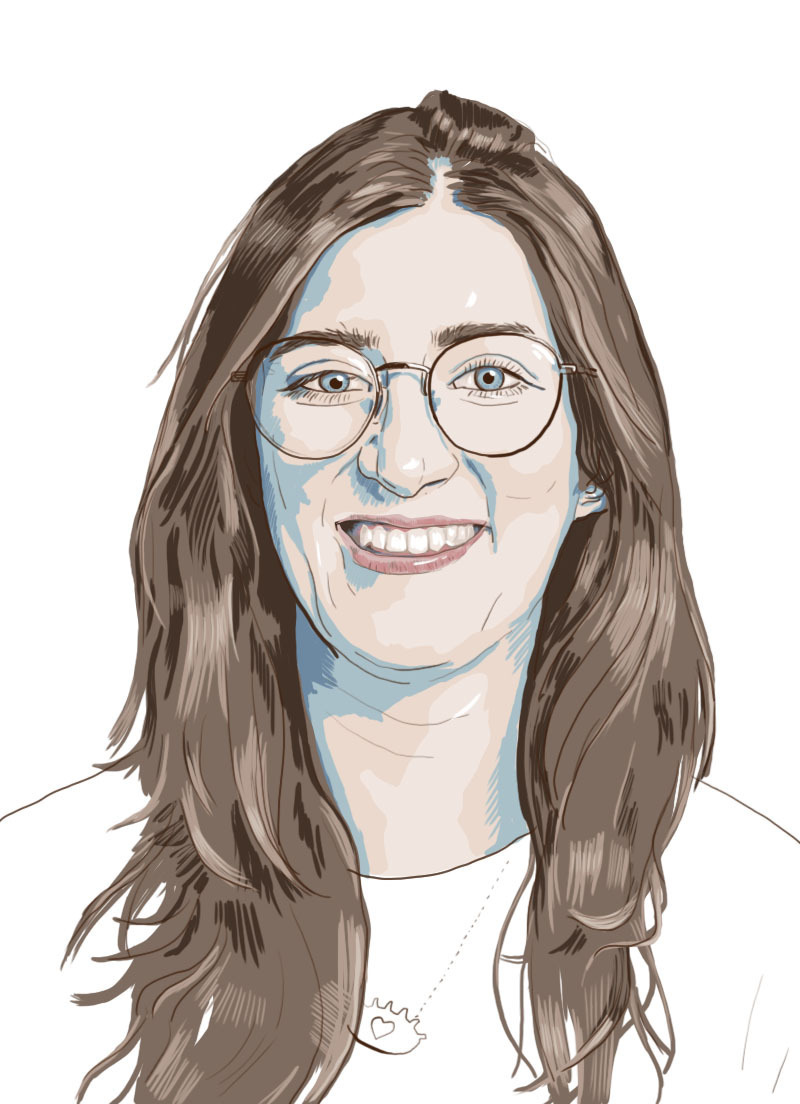 He started at Monterail as a Junior Developer. Now he is a Principal Engineer, building the Mobile team and also shaping the developers’ team.

On his fifth anniversary working at Monterail, Hubert Białęcki talks about his Monterail Way.

How did you get a job in Monterail?

I was recommended. A colleague with whom I previously worked in another company and who later moved to Monterail, encouraged me for a long time and finally, I sent a recruitment task.

Was there open recruitment back then?

I don’t remember to be honest. Back then, Monterail didn't even have an HR department, let alone a recruiting department. I sent the task via email.

At Monterail, it’s always been and still is that every applicant is taken into account.

Whether it's a recommendation or by sending your CV via the website. 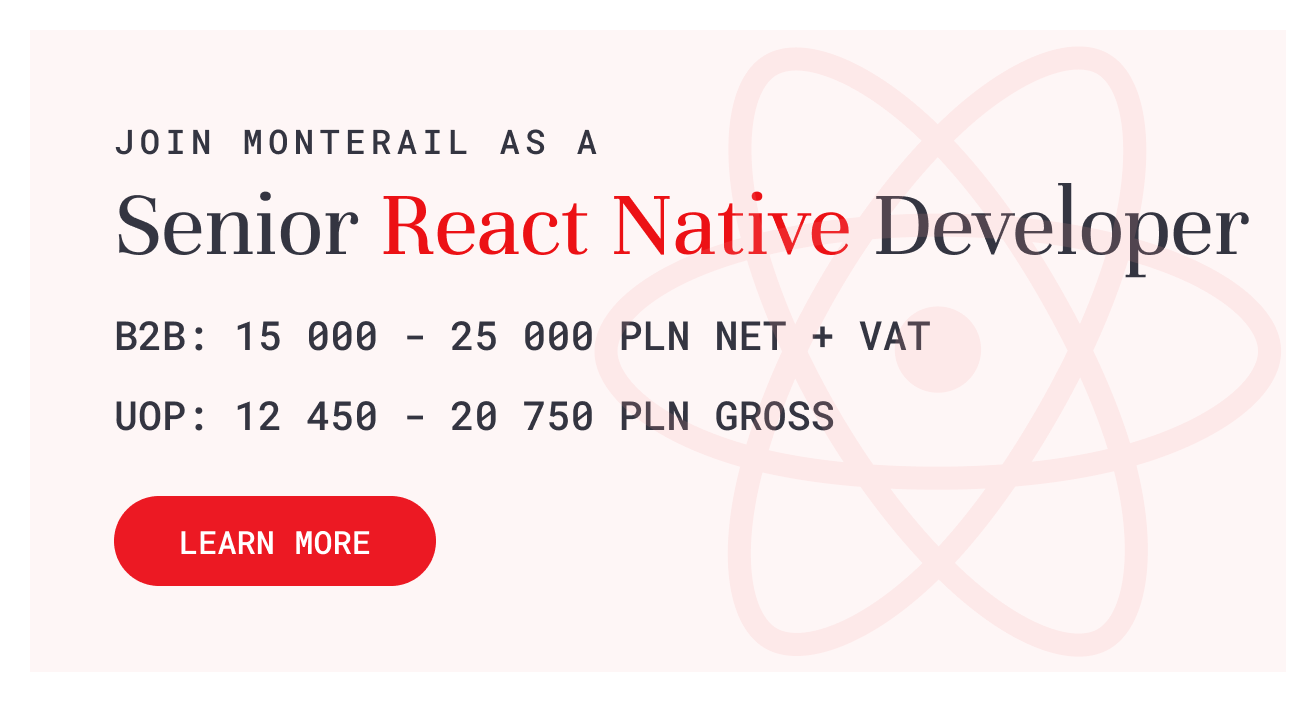 What position did you start from?

I applied for Junior Javascript Developer. I went after a junior position because I wasn't doing things in Angular, I actually worked with it for the first time during a recruitment task. After three months of work as a junior, I was promoted to a regular.

Do you remember your first project?

The first month I spent on the internal project - we were doing quite a lot of them at the time. One of these projects was to create an editor for blog posts to go through stages of verification.

Every new person went through such an internal period and had a leader. Mine was a person who was also quite fresh in the company at the time and later became the Head of Technology. He was always there to help me. He continued to help me long after he was promoted. We would meet and think together about various solutions.

As soon as it turned out that I was doing well with the first project, I was transferred to the Cooleaf project. I was supposed to replace another developer there and I stayed for a year, and on the way, we started developing a mobile application.

You were promoted after only 3 months. That’s very fast.

Yes, I already had some commercial experience, so here, during three months of work, I had the opportunity to consolidate my knowledge and show my skills in practice. Now, the process of assessing skills and promotion is designed in such a way that after six months from the onboarding there is a peer review and conversation about the next stages of work in the organization. At the same time, it is also possible to renegotiate salary or promotion.

I came to Monterail with two years of experience - I had already worked on a lot of projects before. In Monterail I have worked on a few projects, not counting situations in which I helped with others. In my previous work, I counted that I did around 100 websites - a large part of which are really large websites. It was a completely different kind of work, I mostly did websites, and at Monterail I mostly do applications.

You have also become a mentor, you help others develop.

I have been mentoring for three years. Currently, I am a leader of five people at the same time.

In my opinion, the main aspect of being a leader in our company is support for the person and taking care of peer review, feedback, so that this person knows how they are developing, how they’re doing. Team members should be regularly provided with tips that will help to go further in a direction that is consistent with the person and the entire organization.

Sometimes it is also technical assistance, when solving programming problems, we can sit down together and find a solution. And sometimes this aspect turns out to be completely unnecessary and there is more talk about general stuff or non-technical development issues.

So as a mentor, you individually adjust the type of mentorship to the mentee?

We are actually introducing a new structure, thanks to which the leader will have mentees who work with the same technology or as similar as possible.

When introducing this structure, I wanted people who recently joined the company to get more support. It doesn't matter if they come with junior, or senior experience - this path can be just as complicated when people join a new team, a new organization.

Since we have a structure that is technically related, employees have a clear path and know who to ask about what. Work is much better organized then, also in situations when someone is on holiday.

In mentorship, it is also important to provide accurate feedback after peer review and that the employee is aware of what they are doing well and what else is worth working on. Feedback - positive or not, is in my opinion one of the most important things in mentorship.

How do you combine leadership commitment with work in the project?

In Monterail, there is time dedicated for tasks related to both. We have cyclical one-on-one, as part of which we provide feedback, comments, and more technical support. I usually sit down for these tasks right away, don't put it off until later.

It's different with peer reviews - it is an intense period, it requires gathering feedback from other people from the organization, meeting the person being feedback, and creating feedback based on what others say.

I try to plan it, I communicate in the project that I will have less time in a given week.

Now your main technology is React Native - what did you start with and what was your technical development path?

I started with PHP, HTML CSS, some JavaScript, Angular Js, Angular 2, and then a combination of React Native and React.

As I started, I went into the project by switching from Angular. I needed a moment to change my mind then, learn things about React itself, how it works, how it differs from Angular. After a few months, I had way more confident with it. I had the time to assimilate these concepts and learn them.

When it comes to React Native, I worked with Ionic before, so I had contact with mobile applications.

Now my position is Principal Engineer, it is divided into two parts: I am a part-time React Native Developer and the other half-time I am a Principal Engineer - this is a more leadership-managerial role. The main responsibility is to take care of the Mobile Team, its development, and supporting leaders.

I am responsible for ensuring that people have time and space to grow and develop. I try to organize meetings related to sharing knowledge, encourage people to get involved in writing articles or making presentations, so that we all share our ideas, comments, or questions.

In addition, now we are introducing the principle that there should be a kick-off person in each project, be it a Principal Engineer or Architect. The goal is to support the team in the first weeks of work - technically or in communication with the client, or by sharing ideas and solutions.

What do you value your participation in many projects for?

For the opportunity to look at the cross-section of projects from the business, technical and general side. I also value the opportunity to get to know people and understand what we do as an organization. There are dozens of projects, currently, we have about 30-40 projects open. There are over 10 mobile projects alone and the cool thing is that we can exchange specific solutions.

The opportunity to be in these projects allows you to learn what we are doing as an organization. This makes it easier to identify areas where standardization should be improved.

You have been working in one company for 5 years. What, from your perspective, is the most important thing that you have managed to do professionally during this time?

I have noticed that I can establish a good relationship with clients very quickly and solve problems quickly. As a company, we try to support clients not only from the technical side, because we run projects from the design workshop phase, and often we have a lot of information, data, and knowledge that we can support clients.

Can you tell me about an example project?

A good example is Cooleaf, who has been with us for over 10 years. During this time, the application has changed several times, and our comments, or the analysis of how people use the application, allowed the application to evolve.
It’s currently our benefit at Monterail - we use it to appreciate and engage the team members.

What professional successes are you particularly proud of?

The important thing for me is that I had my part in the process of working out the change and developing the company. So creating new roles, a new structure, paying attention to the key aspects and addressing them. At that time, we organized a two-day workshop, during which we covered a lot of important topics both from the point of view of clients, the team, and the entire company.

I would call my success the fact that I came to the point where I could see things in the organization that needed to be addressed and see ways in which they can be met. That I was able to participate in this process and work on it. And that we will continue to work on it - it was only the first stage.

Do you already have plans for your Hi!5 leave?

After being a Monterailian for 5 years, team members get an additional full 1-month paid leave as a thank you for being on this journey with us.

I have a little, I'm starting in a week! By default, it is 4 weeks and not less, but you can add the normal paid leave we have, so you can extend it but not shorten it.

The goal is to take full advantage of this holiday once - after such a long period of work in one place, but for me personally also - after 8 years of professional work, a month off is useful.

Are you going to disconnect completely?

From work? Yes. I know that the team is strong enough that everyone will be able to handle it, and I know that there are people responsible in the company who will help if necessary and any problems that arise will be resolved. So yeah, I'll definitely not be working. I always tell people to disconnect from work on vacation - that's what it is for. It does not matter if you are a junior, regular or senior - it is good to use your free time in such a way that you do not think about work. We also encourage employees to take at least two-week vacation once a year - I know from experience that only such a long break allows you to completely break away from what we do every day, switching the brain to a different model.

What challenges await you after your return?

We will continue to work on the development of the Mobile team and introduce further changes to the structure. I have a lot of conclusions that I would like to address after my return. We also have a lot of new projects in Monterail, so I will definitely have stuff to do.