ng-europe: The Good, The Bad & The Ugly

This post is not an abstract of ng-europe lectures. Instead, the goal is to summarize our experience as participants.

Ng-europe is a conference dedicated directly to Angular JS developers that takes places in Paris. Since Angular is our framework of choice, it grabbed our attention instantly. Being a part of the local JavaScript and Angular community in Poland, we appreciate every movement involving the exchange of knowledge and experience among developers. If local meetings have been so valuable to us and other developers on so many occasions, how about an international conference? With Google as the main party involved, and most known Angular developers in the community participating as speakers, ng-europe looked very promising. As a result, seven people from our Monterail team decided to go on a trip to Paris. 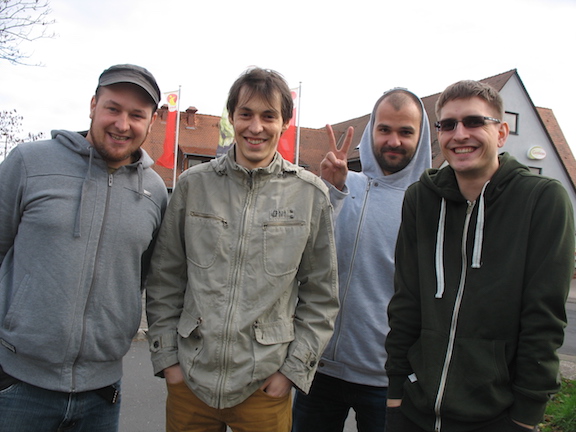 On our way to Paris!

On the cold morning of October 22nd, we arrived at Espace Charenton. The conference welcomed us with our ID cards, T-shirts, mugs, brochures, croissants and a crowd of people eager to expand their knowledge about ng-stuff - everything you would expect at a place like that. Everything but Wi-Fi access. Convinced that it was temporary, we strolled around to check out the venue and even met some fellow countrymen. Some conversations were had, but opening keynote time was approaching quickly, so we headed straight to the lecture hall and took our seats at the back. Preface, opening song, the keynote - the show has begun.

Two days and twenty six lectures. Every single one prepared by a true Angular enthusiast, whether a sponsor, Google or just members of the JS community. With a conference like ng-europe, we were expecting nothing less than well-prepared talks full of great ideas that could inspire us. Saying that there were no such talks would be a great overstatement, but we can’t really say we were satisfied.

Let's start with the good parts. Looking at Matthieu Lux coding simple Angular from scratch before our very own eyes was a truly great experience. It helped us better understand how two-way binding works under the hood. Sweet!

Rebuilding #AngularJS from scratch, with the core devs as audience? This guy is bold! #ngeurope pic.twitter.com/qU6mi6VEhq

The second thing that we really enjoyed was the news about Angular 2.0. So many changes were presented that every Angular enthusiast should have listened to the presentation with open ears and mind. Additionally, both Igor Minar and Tobias Bosch did a really great job at providing all the information in a light and humorous way. That definitely helped it spread across the community.

Seems Angular 2.0 is not at all Angular but in name ;) RT @bioub: AngularJS 2.0 in one slide #ngeurope pic.twitter.com/wKKTaRSPAW #angularjs

The last lecture that we want to mention is AngularJS Accessibility by Marcy Sutton which touched on a matter that is often overlooked and was discussed in a perfectly prepared way. There was a nice introduction to the topic of ARIA and accessibility followed by a demonstration that let us experience the web in the same way as people with disabilities experience it. The great culmination was illustrated through practical examples of common mistakes with some possible solutions and improvements. It's hard to imagine how it could get better.

.@marcysutton on accessibility at #ngeurope. I notice you describe each image you use verbally, yet unobtrusively. pic.twitter.com/l3qO9b2mu7

Informative and well-prepared talks were sadly in the minority, however. Many lectures were lacking any depth and didn't force the audience to think at all. Some suffered greatly from a lack of content, that we felt it could easily be squeezed into a 5 minute lighting talk.

. @iteamon gives us talk about monads - the first one during #ngEurope when we have to focus and think pic.twitter.com/AEFtHNMYRM

Others were simply not prepared properly, and we are talking about let's click through documentation examples lack of preparation. There was also a presentation that, while nicely prepared, covered such basic information that it was hard to believe that it was being covered at a conference aimed towards JavaScript and Angular enthusiasts. What's more, one of the hottest topic we were looking forward to - High Performance Angular Applications - just disappeared from the agenda.

Unfortunately we learned a lot less than we were expecting to.

The logistical side of this event was somewhat chaotic. The brochures we received were filled with sponsors descriptions, leaving two pages for the time schedule that was outdated from the beginning of the first day. Without Wi-Fi access it was hard to follow the news schedule from official website which, additionally, was down at many times during those two days. For the same reason we missed Twitter stream, something that is often the real heartbeat of the community during such events. What's more, some people somehow got the wi-fi password that was probably meant only for speakers, which slowed it down so much that it severely handicapped some of presentations, as they were supposed to use an internet connection.

What's even more unfortunate was that some people could not even realize what problems were occuring with slides, because they almost couldn't see them. The lack of proper projector adjustments led to presentations that were barely visible for the back half of the audience. If that's not enough, there was also a notorious problem with displaying sponsor logos on the back screens during the first several minutes of a talk.

Talking about sponsors... We really understand that there are companies that helped allow this event to happen, and accordingly want and deserve some visibility, which is ok. There were moments, however, when we felt like this event was organized by a marketing agency - there was just too much of it.

Something else that left a lot to be desired was the catering. We are still internally joking about the lack of coffee and tiny sandwiches, which were fine, but it really wasn't what we were expecting after seeing Lunch and Dinner in the agenda. The only bright point was tasty wine, served with lunch. After the first day, we were upset and hungry; during the second, we just went somewhere else to eat.

We were really eager and hoping to say something good about the organizational part of the conference, but sadly we really can't. 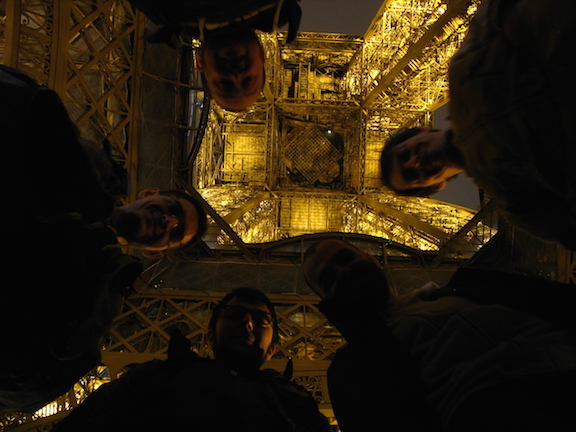 Under the Eiffel Tower!

Aside from the obvious possibilities for improvement, we also want to point out two more, that we feel could work nicely. The first one is a person that leads the whole conference - announces speakers and thanks them - which gives listeners the feeling of continuity. The other is an official afterparty, which is the best opportunity for networking. We are aware that organizing such an event for 700 people is not a simple undertaking, but we believe that it is possible.

To sum up, Angular as a technology is still new to many, and it's good to see that so much people are becoming increasingly interested in it. It's good to see that there are events where they can meet, talk, and learn more about this fantastic framework. It's also good to see how the community is growing and maturing bit by bit. Even a lack of Wi-Fi didn't prevent people from sharing their great experiences through twitter and other social media outlets. Just imagine how much greater the hype and discussions could have been if only everybody there could participate in them. It would be nice for organizers of ng-europe to notice this great passion in the European community and next year prepare a truly world-class conference, both in terms of content and organization.