If we made a ranking of top corporate buzzwords of the past two decades, "innovation" would likely take the podium; Chief Innovation Officer seats were added to many executive board rooms across the globe, R&D divisions have been "recoolified". If innovating has become a sector-agnostic must for any business claiming to matter - what did it mean for companies that offer innovative technology solutions as the core of their service?

How did we get this idea?

"Point.1" was introduced to the group of PM's at a meeting called by our CTO: "10% - that's how much time we'll give our employees to dedicate to their passion project / learning / self-improvement. 10%, or 0-Point-1 if you will".

The idea was fairly familiar to us, as we already had an R&D program in place; with a budget of 8h a month per person, it was a good sidekick for when our job required us to move outside of our comfort zone a bit quicker than the project could tolerate. Point.1 came with considerable improvements and ambition to provide a more global and meaningful platform for growing the company's skill portfolio both vertically and horizontally. The main improvement to the R&D program was that the option to do Point.1 activities was available within working hours (previously only an after-hours option), a doubled hourly budget per person to be utilized per quarter rather than per month and periodical company-wide meetings for beneficiaries to present their progress.

I guess this concept and its pros do not require a deeper introduction, especially in such an innovation and employee-driven market as IT; I believe most companies with aspirations to acquire and retain talent are bound to have that board meeting, with one presentation slide dedicated to a Gmail case study and the potential that lies in empowering employees to follow their passion.

How does it work?

As mentioned above we introduced a few rules of how the new idea should work in our particular case.

At the beginning of every quarter, everyone gets a budget of 10% of their usual working time to spend on the Point 1 activity. This amount is not accumulated, so when the quarter ends, unused hours just burn off.

The Point 1 time can be utilized during working hours as well as after hours. Here comes the subtle moment of not disrupting the project work at the same time. We want to cherish a culture where everyone has the opportunity to learn new things and just play around - think curiosity - but the core of a software house's business is still the client's work and it will always be the main priority. Having said that, everybody can use Point 1 time when they want to if it does not affect regular project work. (A week before some big release is probably not the best time to take some hours off project). So we agreed that if a person wants to use their Point 1 time during work hours, they should consult the PM first to make sure that there wouldn't be any delays and blocks because of it.

The other one says that taking Point 1 time is not mandatory in any way, so it's solely person's decision if they have a good idea and want to spend some time implementing it.

There is no hard limit of what you can do during this time although we have set some general guidelines. The time could be spent on things benefiting the company in any way as well as professional growth. So in other words quoting Hrafn in this discussion as we couldn't have come up with the better definition:

"spending time learning a new software technology is great, using the time to learn guitar is not".

Things we can do during that time include but are not limited by improving skills (reading blogs, watching podcasts, learning something new), preparing presentations to share your knowledge with others (DevMeeting, DesignTeamReview, Meet.js, etc.), testing and researching new tools and technologies, designing and coding own ideas and for example writing blog posts such as this one.)

Though most of the team are developers, we didn't limit this with production team related topics. The Point 1 paradigm applies to everyone in the company: Developers, Designers, QAs, PMs, Business Development, Office managers, etc. The thing that could serve as an example is the short movie about Monterail we've been working on using our Point 1s (soon available on your screen!).

At the end of each month, there's a Checkpoint meeting - a company-wide meeting - where everyone presents what has been accomplished by them during Point 1 time. This meeting is more of a knowledge sharing seminar rather than just reports being read. More importantly - it is being run with a wider audience: people of different roles and specializations are there which makes it a convenient platform for sharing ideas and research as well as getting to know interesting things that are going on in the company outside of you specialization. 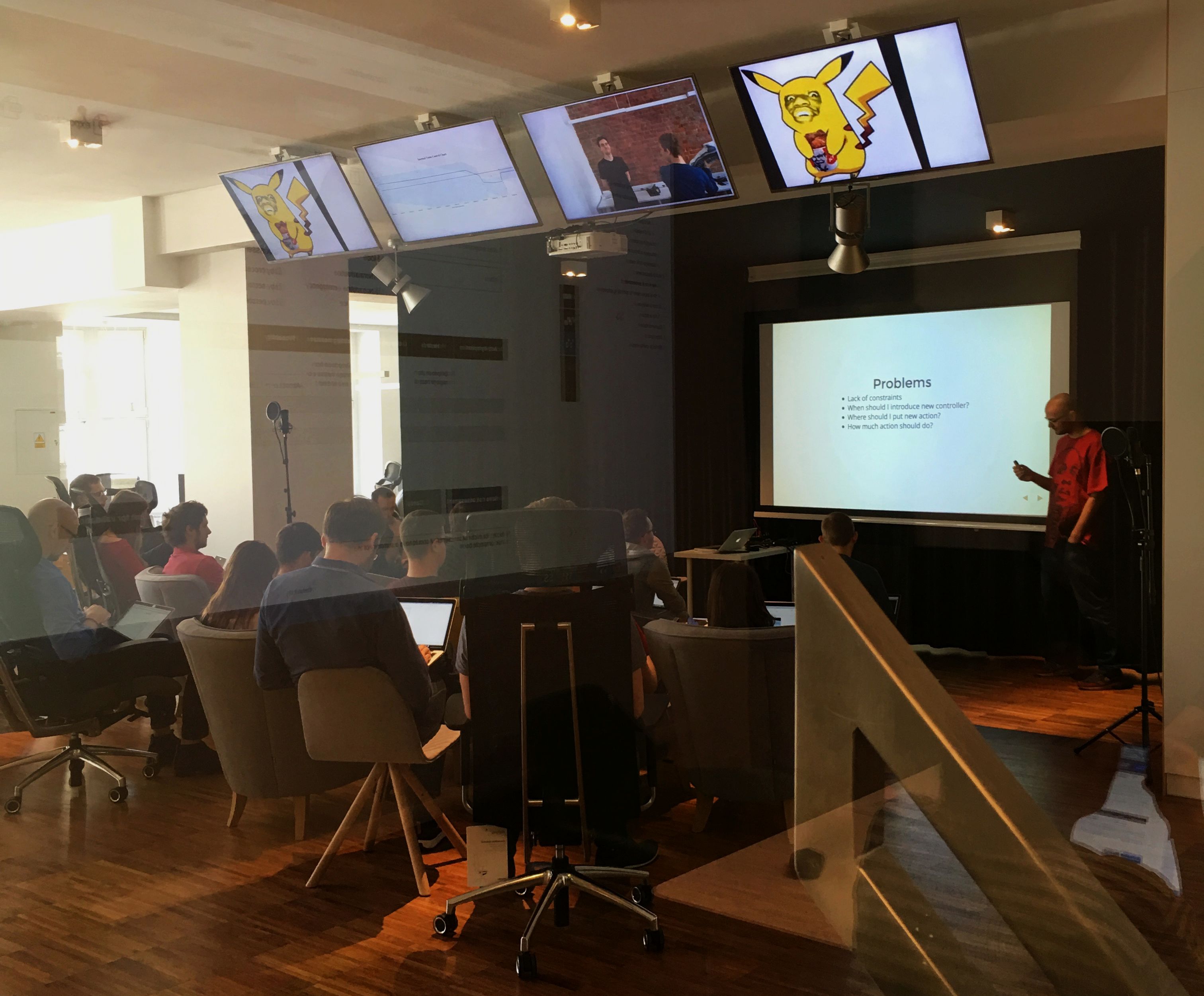 We share knowledge about everything, even on how to write blogposts #meta

So now after a half a year we've come to the most interesting question - was it worth it? How do people perceive this idea, was it used in the way we intended it to be used? What values did it bring in? And what, in particular, did we achieve with it? Recapping the first round of Point.1 projects was expected to be very exciting and even with the bar set this high - the experience definitely delivered on its promise and then some. The topics our developers focused on were very broad; from experimental IoT health sector innovation to several research projects that would improve our client projects, increasing our visibility in the industry, or simply introducing improvements to everyday inconveniences of a developer.

The great majority could be categorized as performance improving projects. And as you will be able to reach the results of those project at our blog and some IT conferences - they did contribute to our companies external visibility and brand building. These projects range from research on mutation tests, react, hanami vue.js, or integrating Docker into your project for greater reliability and convenience. We've thought big and we've thought small: while on one hand our developers created Monterail's own internal CSS framework that comes as a great tool for both our internal as well as contracted apps, others have worked on a hover-activated Sublime Text sidebar or preparing the workshops to share ideas.

Not to mention that "probably the most complete Vue.js selecting solution", which became quite popular in Vue community was also created thanks to the Point 1 time. The marketing collateral turned to be quite astounding - not even 2 weeks had past before we received the first commercial request for cooperation based on our companies activity on the Vue.js front. With 544 Github

(and counting) we are thrilled to see this .1 branch develop.

The real game changing factor, though, came with Internet of Things dedicated time, work and research. Here we have several collaborations to name. Intelli Heart Monitor for one thing is a really exciting project aiming to become a heart-health partner for users with a standard smartphone; by using the flashlight and a camera pointed at the user's finger, the app will visualize an electrocardiogram reading on your phone. It will not only inform you of any deviations, but also encourage a frequency of monitoring appropriate to what is indicated by your results. That's not the only project dedicated to widely understood well-being developed under the umbrella of IoT - we have also created an app for making beer. Because one of our prominent IoT specialists is also a true, die-hard brewer - we now host an experimental tank in our office, ever so often visited by impatient employees. Getting back to the point though, with the help of small monitoring divides installed into your brewing gear, you are able to track the micro-conditions of your fermentation process to ensure insightful control and an optimal quality to your batch. Sure this all sounds like fun and games, but taking the perspective a bit further is quite thought-inducing indeed.

By enabling our talent to roam free in a specially designed framework, we have been able to improve quality of delivered services, our branding. And thanks to isolating and investing in a particular, (in our opinion) future-oriented interest, we have refocused how we see our company's core essence and its place in the market.