Time To Grow. How We Designed Our New Office

Disclaimer: this story isn't exactly about our new office, but about values and people. And as much as I realize that this sounds a bit cheesy, that's the truth.

It starts with me and a decision to make: should I continue my freelance practice or should I join an established group of people and reinvent myself with them.

As much as I loved my independence, I felt the need to grow, one way or the other; right around that time I stumbled upon a job offer that really stood out. It was well written, impeccably crafted and felt plain honest. I decided to give it a try. The post was for a UI designer position at Monterail, which made the decision an easy one.

Some time later I visited Monterail's Keep, a 4 storey (including basement and attic) residential building. It stood peacefully in a row surrounded by similar buildings. There was nothing business-y about it.

I must admit that I checked their presence on social media prior to our first encounter so I could get to know them a bit. I knew they had a garden and were keen on using it. Grills, occasional birthday parties, working in the sun, you name it. I saw a photo of people playing a board-game in the middle of a large room that had a particularly familiar feel. There were numerous photos of people working together in relaxed positions, on puffs, sitting in a circle, most likely solving problems. It looked good. I saw photos of Christmas parties and other events — the list goes on. What stood out the most is that I saw people, not a company. 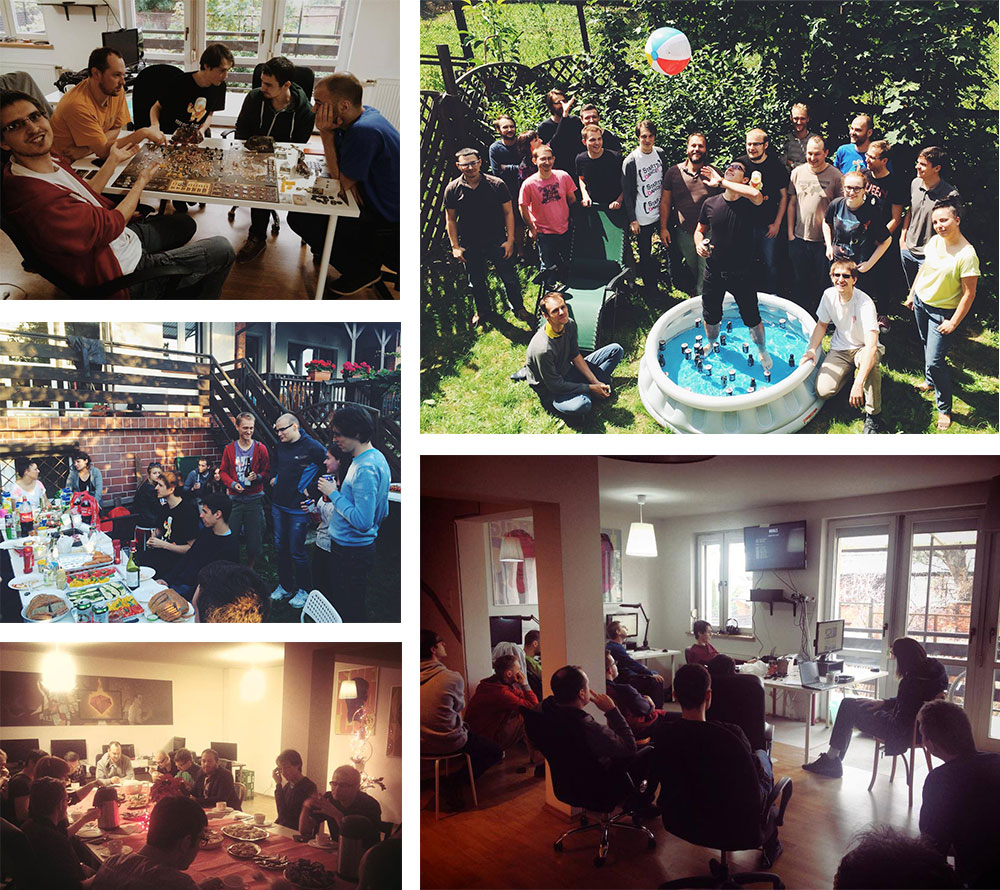 The first day I set foot in Monterail's Castle I noticed how tiny it actually was. Every square inch of space was being used. They had a small kitchen that was clearly used often. Stuff was everywhere. Packs of paper towels on the top cupboards (lots of paper towels). I couldn't resist the feeling that storage space must be lacking.

During the first conversation I had with Szymon, co-owner of Monterail, we talked about Monterail's new office. I thought to myself: new office! That's fantastic. If they'll accept me, not only will I change my work environment, meet new people, and acquire new problems to solve, but I'll move to a brand new space in a few months time. I was doubly interested, because they only considered locations (three of them) in the city centre and I could walk there by foot along a river bank. Maybe even thrice as interested because of my planning / architectural background (I graduated from Spatial Planning on Faculty of Architecture). Questions instantly popped in my head: What kind of buildings are they considering? A brand new office building or an old tenement house with a soul? Are they going to get an entire floor? How huge is it going to be? How far in the design process are they?

Instead of thinking about actually getting the job, I thought about the new office. The possibilities were endless.

Our conversation went well and after some time I got an email from Szymon with the news that I was now a part of the team.

He also asked me about any architects I knew who could entertain such a project. I knew of exactly one person who could; someone who I had the pleasure of working with a number of years ago. Maciej Janczyk. He had joined Q2 Studio, who eventually got the job. It was all fun for me.

On my first day at Monterail I began to appreciate all the space that was being used. There were 10 rooms from the basement to the attic, ranging from really small to quite big. All of the rooms were, more or less, packed with people. On the ground and first floor were backend and frontend developers; in the attic was the design team, CTO and Operations Manager; the basement housed the owners, the office manager, and a cold conference room in an old garage.

It felt packed but it felt structured at the same time. You could feel the motion, every moment someone was walking or running up or down the stairs. In our room there were always discussions. We had a big whiteboard and it felt like the center of some kind of universe. We had visits from frontend, backend, and project managers. Everyone. One thing I liked in particular was that whenever someone wanted to address a problem we would just take our headphones off, spin around in our chairs, and have a discussion about design. Whether it was about the larger product principles of an application, the rules of user experience, or the structure of a user interface, it was quick and it was hot.

There was a team spirit and you could feel a passion for discussion, yet we were inevitably fragmented over those four storeys. As a design team we were a bit isolated in our own room in the attic.

At the same time I joined a special team dedicated to the all-things-new office that had formed some time before. We wanted to give constructive feedback to the architecture studio and we discussed everything: the general atmosphere and how we could achieve it, materials, furniture, who we are, what we do and how it mainfests in the space that will surround us. By that time the location was already decided. Oławska 27-29. An old and beautiful house in the city center — it couldn't have been better. It was a merge of two older buildings, and because of that, it had some spacial constraints. Nonetheless, it was a fantastic space that we got to see on Christmas Eve when we hosted a wonderful party. 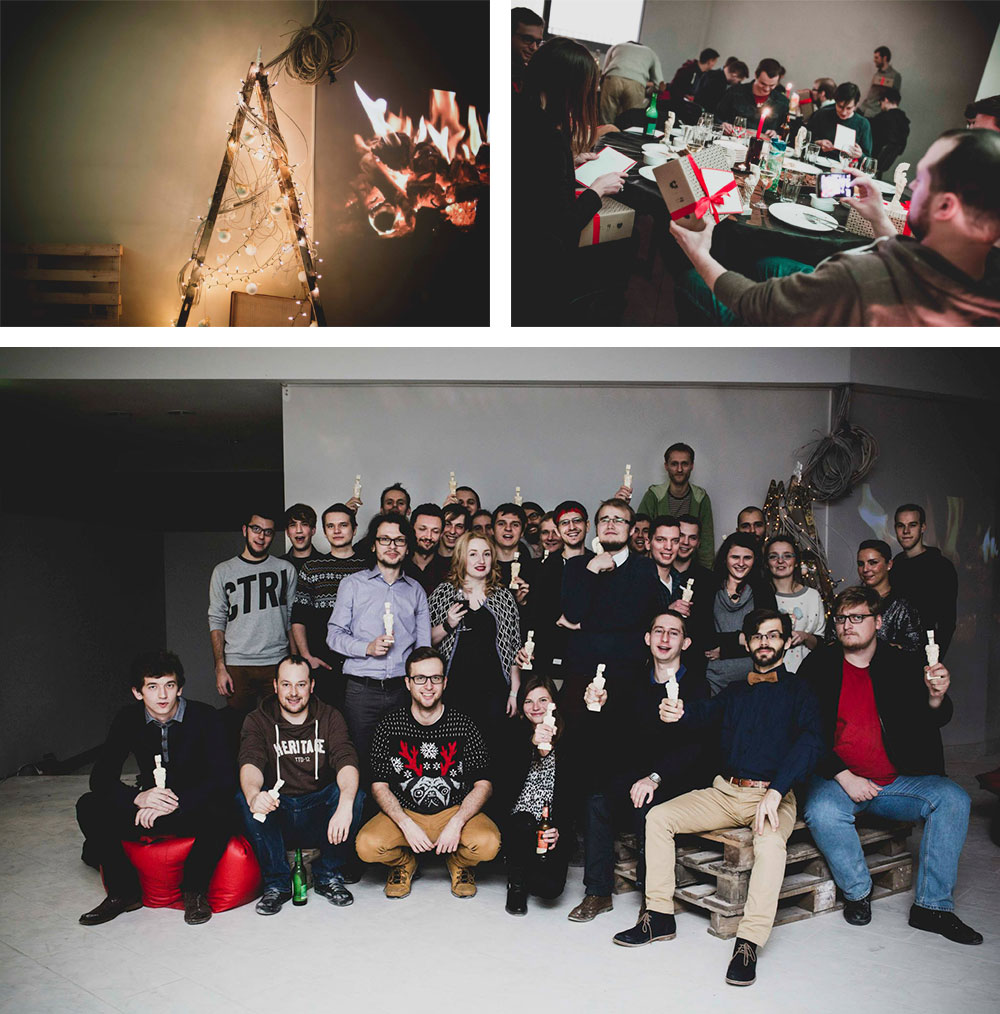 Christmas Eve in the new office.

Q2 Studio presented some wonderful interior design proposals that made us think even more about Us as a company and of our core values as developers, designers and problem solvers. The main question that we were trying to address was Who we are.

Much thought went into those discussions and we were oscillating between two choices: on one hand we wanted something really bright and strong to underline our industrial background and to energize our approach. On the other hand, we felt the need of calm and toned surroundings that would not disturb us in our daily endeavors. After many meetings we settled for the second option and channeled our energy on finding ways to manifest Monterail's spirit for architectural and design details. Our tagline states: Solid and winged. We dissected this statement and everyting hussar-related about our brand and tried to elevate this brand to the next level. But this topic is probably for another post entirely. 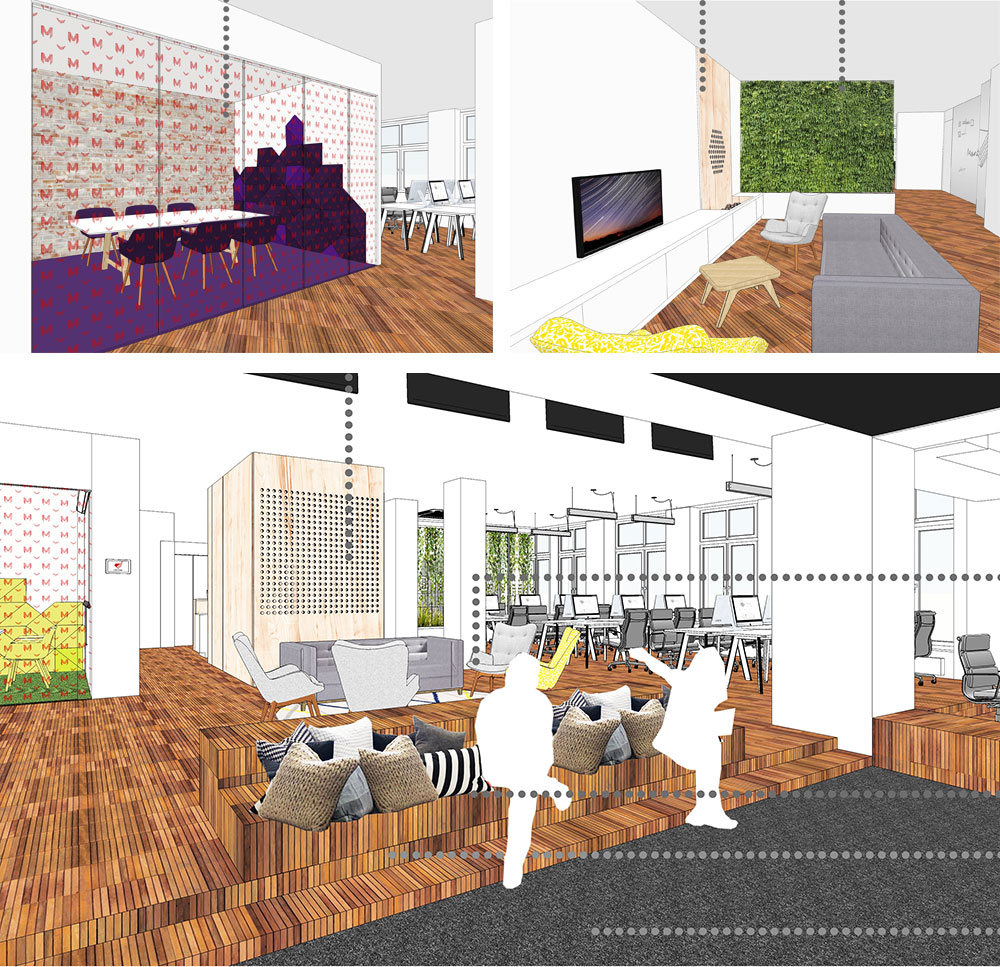 We wanted a great open space for task-oriented, focused, everyday work. A big kitchen in the middle of the office. Definitely more than one conference room. Few call rooms, as most of our clients aren't Wrocław based. And a fun room. What that fun room would be, we didn't have the slightest idea. We thought about this space in terms of functionality. Form follows function. Unless you are Philip Johnson. Then you do whatever you want. 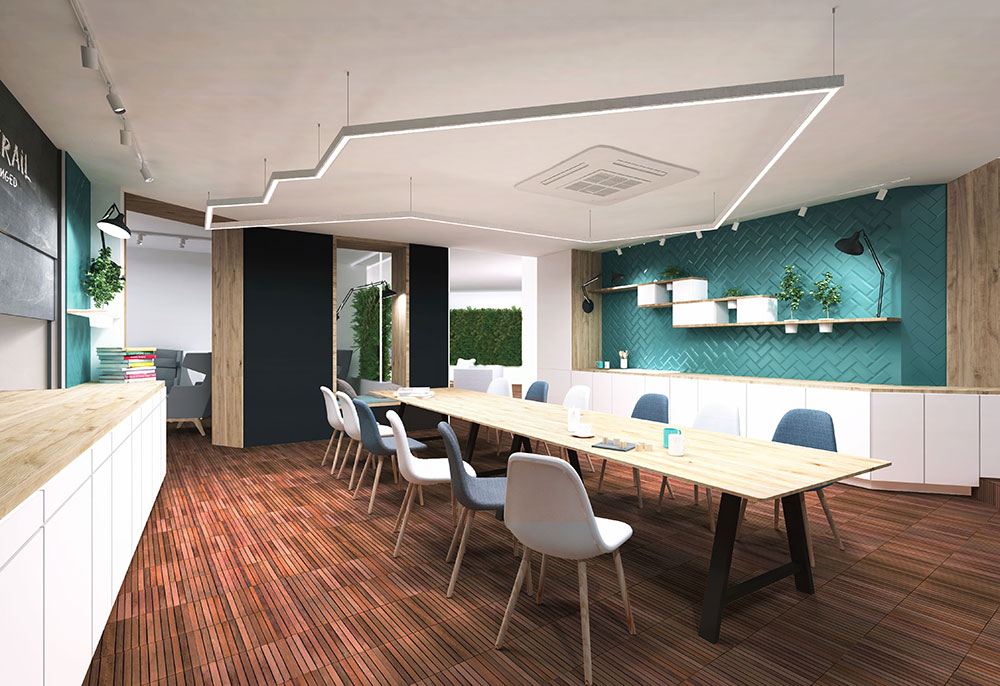 Center of the universe. Big kitchen.

We migrated the main usability patterns from our current office, which felt rational at the time. We planned a separate design team room, because we talk a lot. A big open space for developers, who are quieter. Many diverse spaces for people to gather and discuss and a quiet space with great armchairs and cozy lamps so we all can relax and isolate when needed. And a fun room.

In January we had an interesting shift in the current office. We replaced our functional team approach with one that was project-oriented. At least in part. What it means is that we asked everyone to change locations and grouped them according to client projects. Now I'm sitting on the first floor with another designer, some developers, a project manager, and QA instead of in a separate design room. It's taken some time, but I can really appreciate this change now and we will be able to apply it in the new office. It made the in-project communication and response time much faster and it developed a sense of group responsibility for something that we are slowly creating. 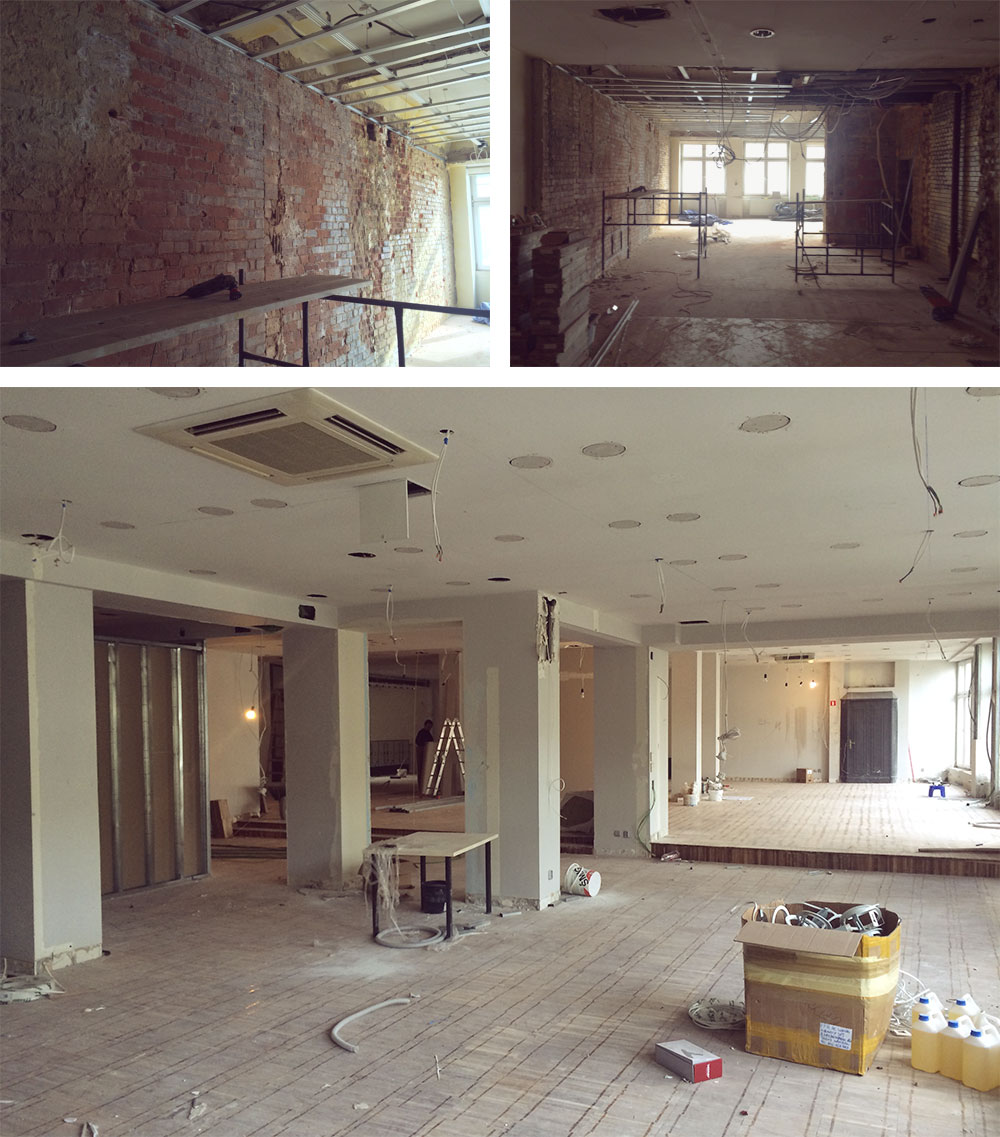 It's not ready yet, but everybody is excited. This is one thing I'm 100% sure about. For me the most interesting part was the building process. Asking myself the question Who are we as Monterail? was tricky, because I'm new, but it made me feel as part of a team regardless. A team of people. Builders. Problem solvers. People that enjoy everyday small-talk, tech-talk and problem-talk. Enjoy the sun. Enjoy working together. We are people who build our own future.