I don't know if you knew this, but we run a scientific circle at the Wrocław University of Technology. It all started last summer. We were talking about the number of students who go through higher education not really realising that their career doesn't have to center around being a Java or C++ programmer in a large corporation.

Not that there's anything wrong with that, if you're into those kinds of things. But for many of us, it's not really that appealing. We wanted to show them that there are many more options: like being a freelancer, building own product or being a developer in a much smaller company (like ours) with a very different work culture. 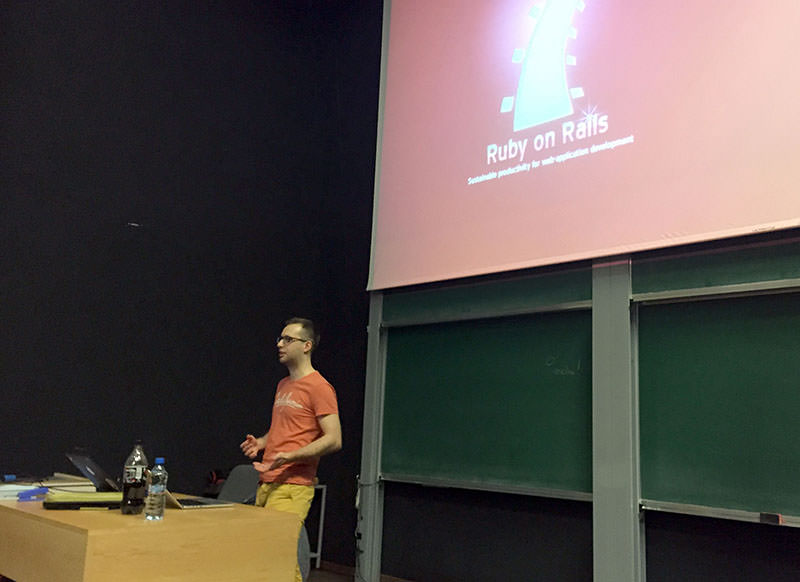 Me speaking at our organizational meeting

Given that many of us studied (or still do) at Wrocław University of Technology, arguably one of the best engineering universities in Poland, we wanted to do something there. We decided that scientific circle is the best way to connect. It gives us flexibility and a level of engagement that wouldn't be possible if we only hosted a couple of lectures.

We want to show everybody who wants to learn and is motivated enough to run rails new that it's really not that hard to write Rails application, and it's also fun.

The thing with running rails new is important because, let's not kid ourselves (and - more importantly - our students) - the only way to learn how to create applications is to spend hours and hours solving real problems. If you really see yourself doing it for the next couple of years or so and really want to learn something, there's only so many lectures you can take. Only so many tutorials, books or Code School videos you can go through.

There's no shortcut and no magic formula. The sooner you start writing, the sooner you will know whether you like doing it - or if you only liked the idea of doing it. The road might be bumpy, but we're right here to help.

I mentioned level of engagement earlier. We thought really hard about the form that we wanted this to take. Finally, we decided that the most valuable thing we can give our students is our presence.

So not only do we host lectures about Ruby and Rails, we also have our own Discourse instance and Slack organization. They're both accessible only to circle members and Monterail employees, so nobody should be afraid to ask questions. 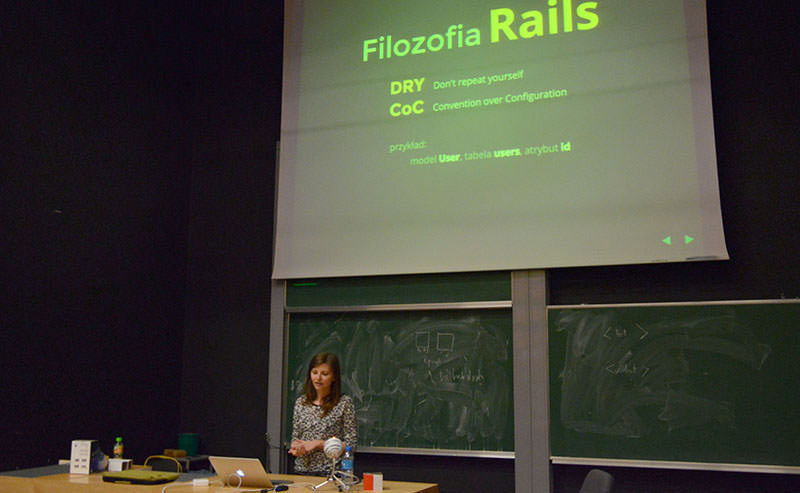 And we answer questions about, pretty much, everything. From I don't know how to start, what should be my first step? (watching Rails for Zombies), to complicated problems like Why doesn't `ui-router`'s resolve function work for me? (because you have an error that's being silenced). It's fun and challenging for both sides.

We strongly encourage our students to think of an idea for a web application and start writing it. It doesn't have to be complicated or novel. In fact, it probably shouldn't be unless you really feel up to it. Writing a simple To Do application or a blog is, by a factor of a thousand, better than only reading a tutorial about doing it. And - as mentioned - we're right here to help.

You might ask – why do we do it? There are plenty of reasons. For one - it's outstandingly rewarding. Seeing people who have never created a web application before spend their free time fiddling with Rails and asking for code review from us? That's really awesome. 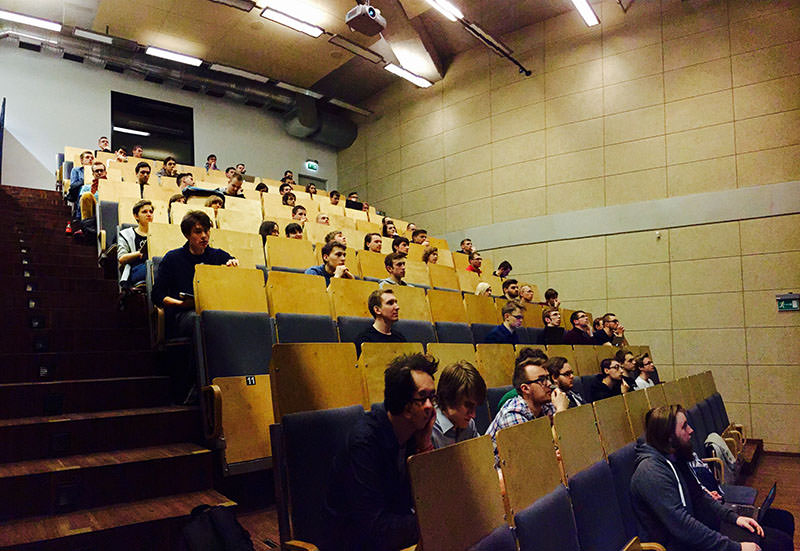 Besides - we feel like giving back to the community. A big component of IT, and web development especially, is the idea of Open Source and knowledge sharing. We feel like we're a part of it and this is one of the ways that we contribute.

It became clear to us that both sides benefit from this deal. Circle members learn from us and, more often than you can imagine, we learn from them. We're forced to go back to the basics and answer questions we thought of as obvious. Why do we use Grape? How should representers be implemented in Rails? Is API versioning worth it in small projects? Those are all valid questions that we thought we had answers for, but they turned out to be surprisingly challenging. And that's a good thing.

Kamila, our developer, is currently speaking at our scientific circle about Rails! #WomenInTechnology pic.twitter.com/rijgij49Oh

We're straightforward with our students that this situation - teaching, preparing curriculum, giving regular lectures - is new for us. This novelty is also what makes it kind of special. We're not teachers and we're not marketers. We spend most of our days programming and solving problems - we simply want to share our knowledge and experience.

It doesn't mean we don't give it our best. We try hard to bring the most value that we can. We constantly ask for feedback and adjust accordingly. We try to draw conclusions from each meeting and think of ways in which we can improve.

To finish this post I've decided to include quotes from some of our students. I was afraid it would come off as cheesy, but I truly believe they're honest.

The only “classes” that made me wanna learn more. After every meeting, I had a feeling that I had to sit down in front of my laptop and write some code. The whole semester has been an experience that I recommend wholeheartedly. However, in order to enjoy every lesson, you had to be fully committed to the workshops, and must be interested in the topic.

I started studies to find interesting career path. As for a guy who created some simple websites, this scientific circle was just what I needed. And it isn't even regular class but scientific group guided by people with knowledge and passion for web development. First semester - first steps in the world of Rails and Angular. Workshops from basics of MVC to debugging. The second one - different approach - lectures and writing our own web app from scratch. Solo or in a team of another members. There are actually a lot of Rails enthusiasts here.

Before first meeting with scientific circle from Monterail I had no motivation to learn something new. Sometimes I wrote programs for school but I never thought about big projects. All changed after first meeting with people from Monterail. People who infected me with a positive attitude and enthusiasm for programming in ruby. Now I wait for Monterail lectures as I have a lot of energy to program!

Joining Monterail's scientific circle is a great way to start or boost your career as a web developer. I really appreciate how helpful and professional they are, keep up the good work guys and girls!

It truly has been a rewarding experience and we are so happy to see people diving into the Ruby world.