There is a widespread belief that there is no place for emotions at work, which may lead to the erroneous equation of professionalism with adopting an indifferent attitude. In addition, we suppress emotions because we feel obliged to comply with the social and organizational standards, according to which expressing feelings are a sign of lack of professionalism.

On the Internet, you can find many blog posts that talk about “how to manage emotions”, “how to deal with emotions”, “how to control emotions at work”, and “5-10-15 ways not to be emotional at work”. Generally speaking, emotions are OK if not too strong. While we have more space for the expression of pleasant emotions in the workplace, difficult emotions (colloquially and incorrectly called negative) are unwanted.

Let me tell you why it's not the best approach and what we can gain from recognizing emotions and learning how to befriend them.

Have you ever heard that anger mars beauty? If you are a woman (especially in Poland), probably yes, if you are a man it is more likely that you shouldn't be sad, because boys do not cry.

Emotions as such do not have gender, but stereotypical thinking about them does. Consequently, men are encouraged to show emotions, but mainly those related to the expression of force, such as aggression, anger, disregard, contempt, or hatred. On the other hand, emotions that show a man as subordinate and weak are considered incompatible with a man because they are in opposition to traits identified with masculinity, such as strength, dexterity, and courage. Similarly, for women, certain emotions are socially considered undesirable. These are states not related to aggression because women are perceived as gentle and responsible for harmonious relations with others. Showing weakness, sadness, fear, anxiety, and crying by women is relatively more acceptable.

On October 22, 2020, Polish women and men took to the streets. The decision of the constitutional tribunal to tighten the anti-abortion law meant that, despite the restrictions related to the pandemic, the streets of Polish cities were filled with protesters. The women were pissed off. The men were also pissed off, but the woman's voice was heard the loudest. The whole world has heard our anger.

This is probably the first time in my life as an employee that other employees heard this anger in the workplace. Some pretended to be deaf wearing "political neutrality" headphones, but none of them were entirely soundproof. Anger boiled in our veins. Suppressed for a long time, felt already a few days before the Constitutional Tribunal decision in our bellies and chests, found an outlet in the throats, first squeezed and then releasing the worst insults.

This is probably the first time in my life as an employee that I have spoken so openly about it in the workplace.

This is probably the first time in my life as an employee when I supported other women in this anger and I was supported by others.

It is probably the first time in my life as an employee that I did not feel judged for my anger in the workplace, which I manifested very clearly. 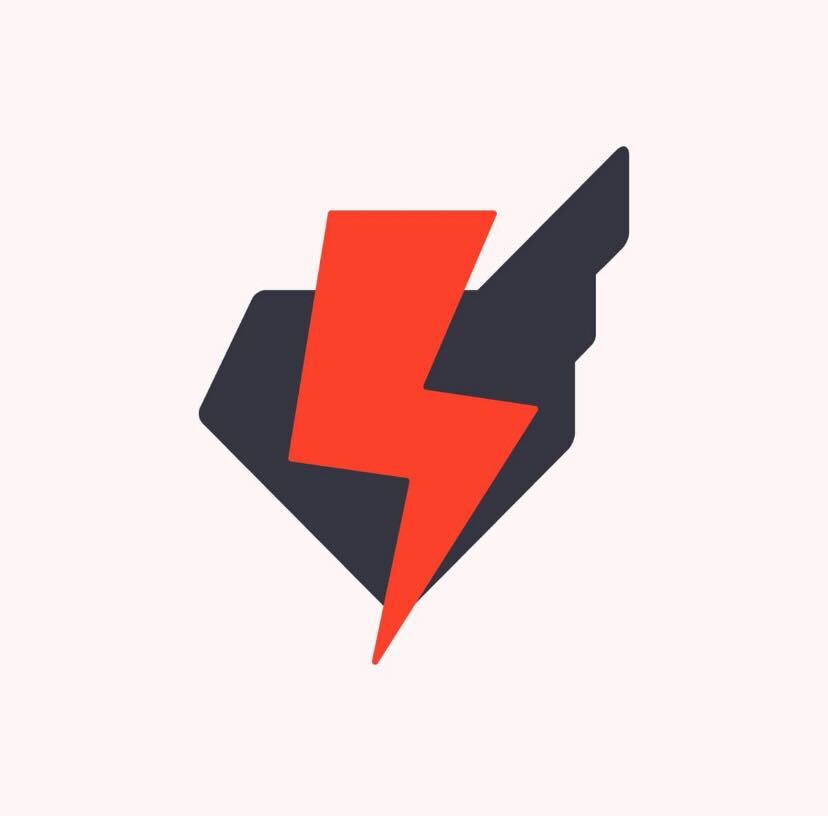 Every day at work, we try to keep emotions reined in. Projects, rational decisions, facts, charts, presentations, Trello boards, Jira, and definitions of done are all important. It even seems that there is no room for emotions anywhere in between.

For a long time, as a woman, I had the feeling that the anger shown in the workplace could lead to me being labeled as “the emotional one”. However, this does not change the fact that anger appeared. It was sometimes transformed into a different emotion, like when I got an unfairly small raise and I allowed myself to feel sorry, which was a way to mask my underlying anger. Anger also appears when, during a presentation, you ask people to write down questions and ask them at the end, and after the second slide you see hands raised.

The anger of women does not fit into what is perceived as professionalism, often suppressed and visible when it becomes as large as it was visible on the streets in October 2020. At the same time, anger appears when our needs have not been addressed and a boundary is exceeded. It gives us a very important piece of information. Are we able to recognize it in our body earlier so that it does not gain the power of an ever-growing snowball?

At the end of May 2022, women of Monterail invited Natalia Roma Grzyb to conduct a workshop. Natalia specializes in working with emotions, which is what it means to feel emotions in the body and use them consciously. She works with joy, sadness, fear, and shame, but our workshop was focused mainly on Anger. We broke the stereotypes about “difficult and bad” emotions on it. We saw how to use the intelligence of our emotions in harmony with ourselves.

Why Do We Need Emotions at The Workplace?

Emotions are not a nature’s mistake, they have a certain function and very practical use. They are part of our life and cannot belong only in a certain context and be suppressed in another one. Technically, it’s possible to suppress our feelings, and often this is what we all do in our daily lives. But suppressing or neglecting the presence of emotions comes with the price: feeling of disconnect, difficulties with making a decision, low sense of self-agency, and the list goes on.

We have to redefine what it means to be professional in a workplace: connected, feeling, aware instead of apathetic and disconnected. Emotions belong in the work environment as much as your next deadline. By using your emotions truly and consciously you can not only gain self-awareness, but also the ability to assess risks, make decisions, effectively communicate and build relationships with your colleagues and clients. - Natalia Roma Grzyb

It turns out that we, women very often suppress these emotions. After a difficult conversation with an employee, after a project that has not been delivered, during meetings with managers, during teamwork with colleagues, when talking about a promotion, and after a difficult call with a client, we try to keep our emotions in check.

During the workshop, we shared how “great” we deal with anger and prevent it from happening. Our list includes: playing sports, being allowed to be absorbed by social media or watching tv series, sleeping in the afternoon, chatting with friends, playing games, or canceling all afternoon activities. We have developed well-known mechanisms of how to prevent this anger and how not to show it to the outside world. Since childhood, we have been imprinted with the notion that it is not right for us women to get angry and through upbringing and socialization, we have learned to mask this emotion, because “angry women” have their labels. 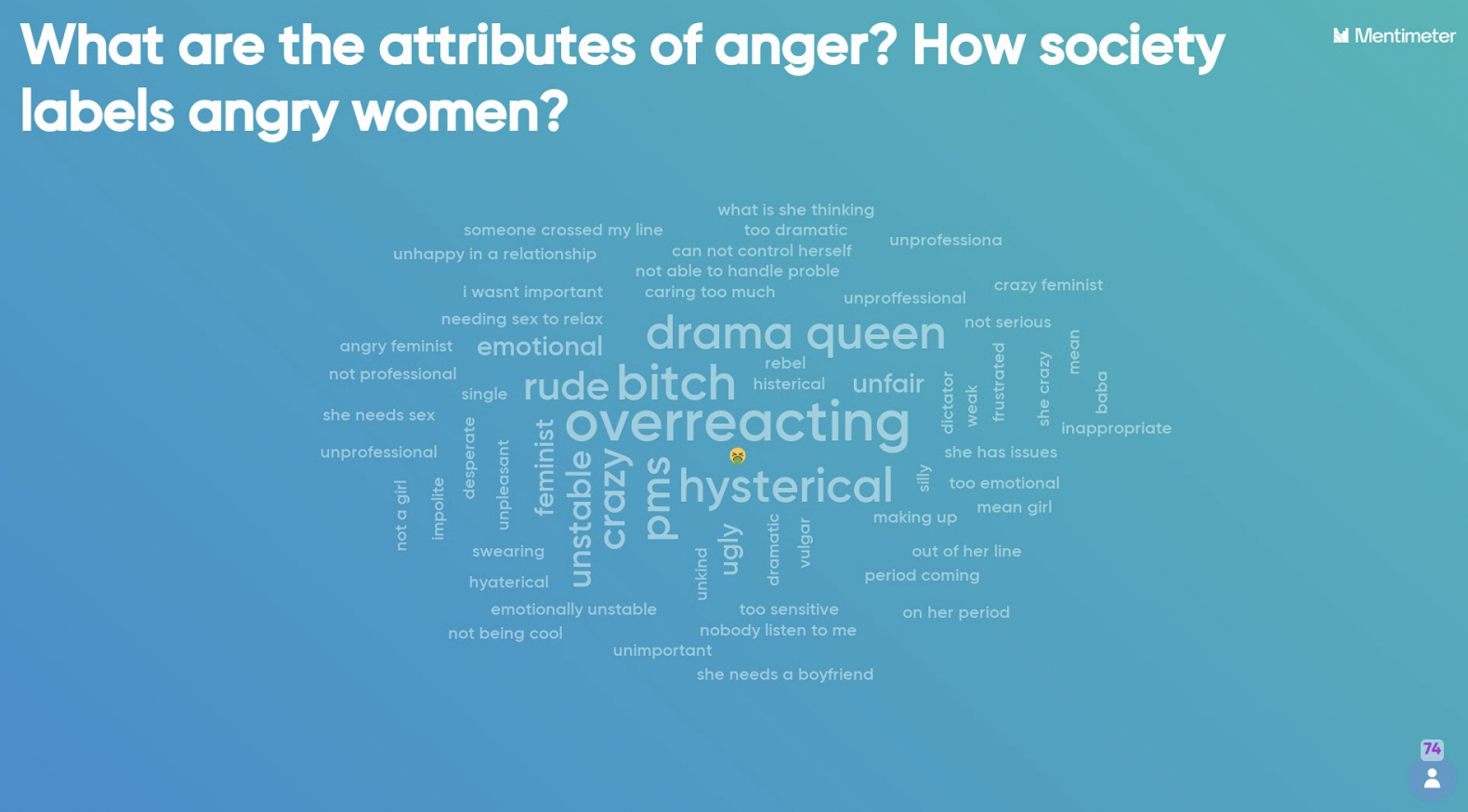 How to Recognize and Befriend Your Anger in the Workplace?

The first step in befriending your anger is realizing why you have been suppressing it in the first place. And yes, once you find the reason why, it can make you really angry! The stereotypes surrounding an “angry woman”: Crazy! Hysterical! Unstable! Drama queen! - have taught us to keep our anger at bay. But this undesired anger has not gone away but found a way to hide under other, more acceptable emotions like sadness, fear or even joy. So what can you do to reconnect with your anger? Whenever you feel sadness or fear ask yourself: is there anger there as well? Is somebody violating my boundaries? Do I want to say no to this? And if the answer is YES - then congratulations, you are an angry woman (and that’s ok)!

Another way to reconnect with your emotions is to listen to your body. We often talk about emotions and feelings while being completely disconnected from actually feeling them. Notice your jaw clenching, your heart rate going up, your breath speeding up and other sensations that may come up for you. Allow your body to soften and ask: What emotion am I feeling right now and why?  - Natalia Roma Grzyb 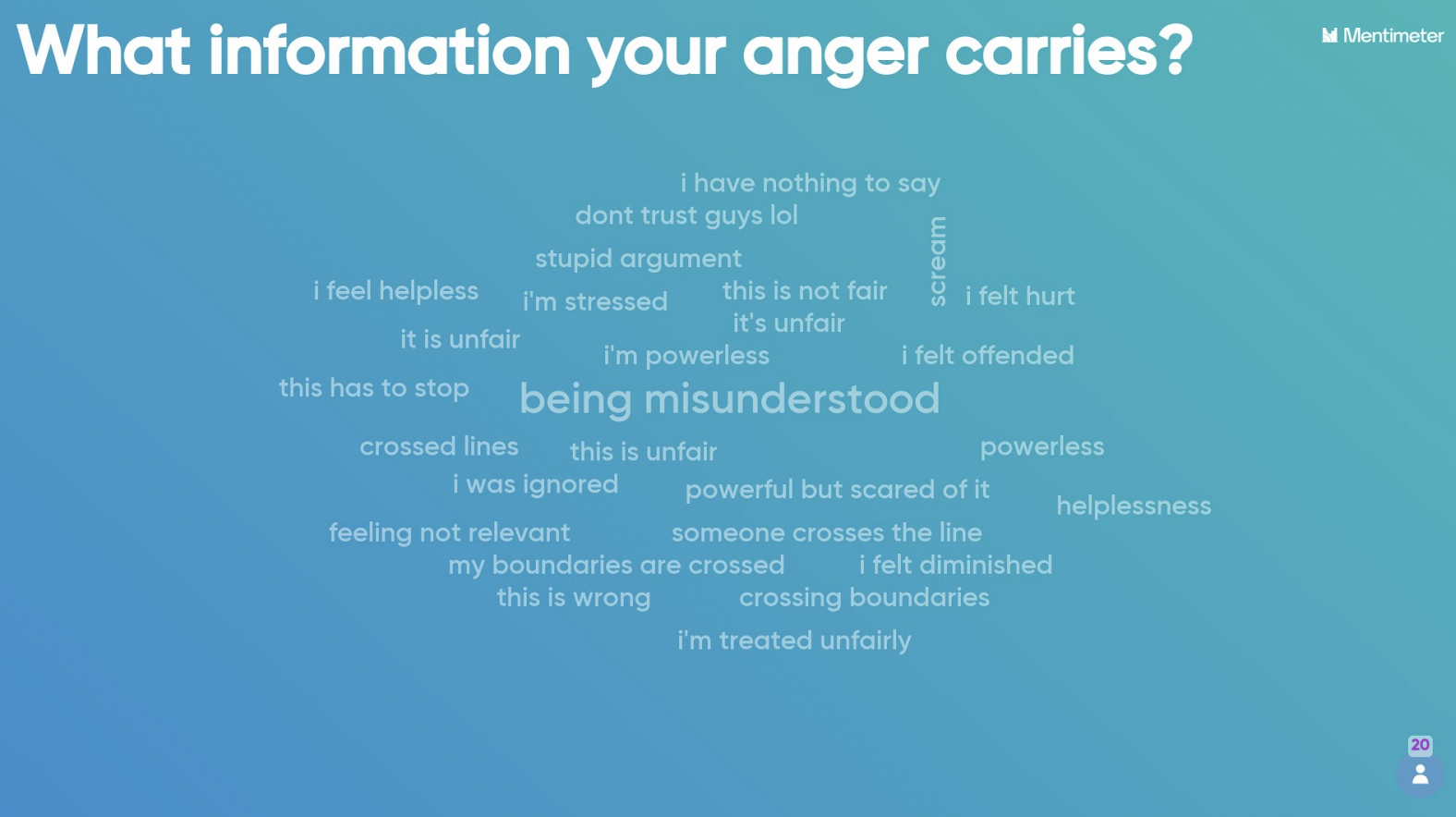 Great Anger - the Source of Creativity, Assertiveness and Emotional Intelligence

"Are you angry with me?" or: "You're not angry with me, are you?" or "You're self-oversensitive" - is this a common reaction of others to our attempt to defend our boundaries? What do we feel then? How do we respond?

Our beliefs about anger are usually negative: we think it hurts, destroys relationships, it shows that we are not calm and collected and we don't have everything under control, so it's hard to trust us, etc.

Meanwhile, anger is an amazing force; energy that opens up, and stimulates. Let's think about what we could use this energy for in the workplace. Imagine that we use our anger and say loudly and clearly at meetings: "No, I disagree" and we do not hide under: "I don't know, maybe, we'll see." Anger is also our "yes" in our body: "This is what I want, this is my project, this is how I want to develop my skills." What would happen in our lives if we began to say no, and what would happen if we began to say a conscious “yes” to the things that matter to us?

How to Use Anger in the Workplace?

Leaving the old labels behind and focusing on the assets of anger, opens up completely new resources and possibilities. Anger carries a lot of useful information: it lets you know whenever your boundaries are being crossed, your voice is not heard or you are treated unfairly. What you are angry about is often what you care about!

With no access to anger, we often become victims of the circumstances. At work, your conscious anger can be put to good use. It’s a shift from being demotivated or stressed to taking action and creating a change for yourself, your team, or your client. It fuels you to take a stand, saying what you want and what you don’t want - without waiting for somebody to do it for you. - Natalia Roma Grzyb 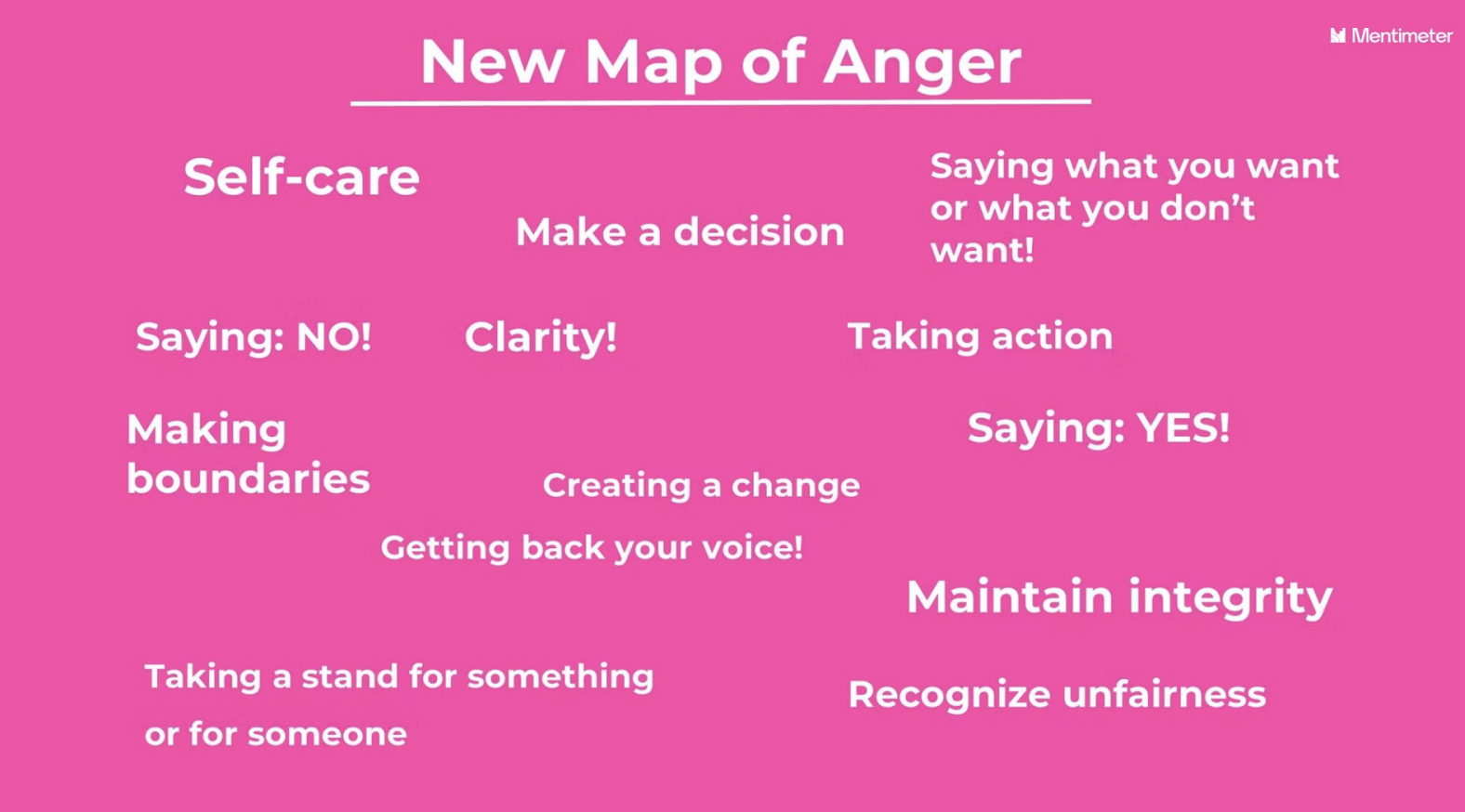 My name is Natalia Roma Grzyb, I am a psychologist, trainer, and mentor. I have spent the last 10 years managing IT teams around the globe. In my practice, I focus on ways we can use the power of emotional intelligence. I break stereotypes about unprofessional, unwanted, and limiting emotions and turn them into the source of power, inspiration and self-development.

The conscious feeling is the new definition of being #professional

I use my management experience to support teams and organizations by facilitating Management 3.0 framework. I also offer consultancy in setting up the Project Management and Customer Success Teams that are easy to scale and deliver excellent services!