iOS vs Android Development for Your Mobile App: Which is Better?

With 218 billion global app downloads in 2020 alone, there’s no denying the importance of the mobile application market. Yes, it’s already huge, but it’s also still growing and full of potential. No wonder companies around the world want to have the piece of that cake for themselves.

But creating a successful mobile app requires fresh ideas, excellent planning, and bold decisions. With Android’s 72% and iOS’s 26% mobile operating system (OS) market shares, you might be tempted to choose Android development only to reduce costs and time to market. But there are some aspects to consider because for some projects it might make sense to build only an iOS app, or to build for both platforms at the same time.

Let’s dive into the details.

Android is an open-source operating system created by Google. Its various versions are used in thousands of different devices, from smartphones to household smart appliances. Thanks to its open-source nature, it can be used at no cost. Businesses like LG, Sony, Samsung, Xiaomi, or Huawei routinely employ Android for their smart electronics.

Originally, Android mobile apps had to be developed in Java, but it has changed since 2019 when Google announced that Kotlin, a modern programming language designed by JetBrains to interoperate fully with Java, is now a preferred language for Android app development.

Apple’s mobile devices are equipped with an operating system exclusive to Apple products – the iOS. This system is much more closed-off than Android and has standardized UI, which generally leads to fewer customization options. On the flip side, following Apple’s design principles guarantees you’ll end up with aesthetically pleasing visuals. All modern iOS apps are developed with Swift programming language.

Swift was first published in 2014 and quickly replaced, for mobile purposes at least, Apple's earlier programming language of choice, Objective-C. Swift includes all modern solutions developers care about while having the ability to interoperate with Objective-C code created at Apple since its inception in the early 1980s.

Despite superficial similarities, both operating systems are unique and demand separate skillsets as well as specific approaches to development. They also attract different users, since pricier Apple devices are (expectedly) more prevalent among wealthier demographics, who additionally engage more with their phones. 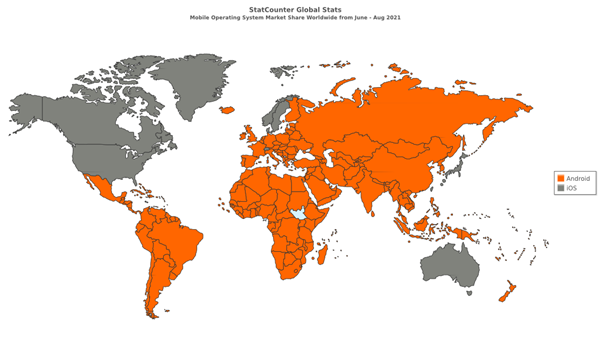 As you can see in the map above (provided by StatCounter), your target audience’s geographic location can be vital in your own Android vs iOS decision. The iOS is much more widespread in richer regions of the world, with 30% of mobile OS market share in Europe, 52% in North America, and 66% in Japan. The Android devices take the lead almost everywhere else, and essentially reign supreme in developing countries.

What about Progressive Web Apps?

For a while, Progressive Web Apps, also known as PWAs, were only available on Android, but since March 2018 PWAs are supported on iOS too. You can learn more about it here.

How is Android better than iOS?

With over 3 billion active devices, Android is the operating system of choice for a majority of mobile users in the world. With literally thousands of various device models – big and small, derivative and innovatory, cheap and expensive – virtually anyone can find an Android device for themselves. Google’s OS is remarkably popular in developing areas, such as Africa (with 82% Android market share in the continent as a whole), Asia (with 83%), and South America (with 89%). It’s also still the number one mobile OS in a majority of Europe, although it’s not as prevalent as in poorer regions.

Being open-source and having somewhat lax rules regarding how apps should look and feel, the Android system offers far more flexibility and customization possibilities. In this type of environment, experienced developers could fully unleash their creativity. But giving unlimited creative freedom to devs isn’t always desirable, especially if your project has tight deadlines. More possibilities also mean more time spent on ideating and more opportunities for something to go wrong.

As you could probably guess, Google’s mobile operating system isn’t a perfect one.

How is iOS better than Android?

The iOS users are generally more inclined to pay for apps and make in-app purchases, while the majority of Android users expect apps to be free. Knowledge of these preferences typically leads Android developers to monetize their apps by incorporating advertisements. Although sometimes it may seem like the only reliable way to make money from an Android app, the disadvantages of adding in the ads are clear: they slow down the app’s performance and spoil the user experience. Meanwhile on iOS, with users more accustomed to paid mobile applications, your app’s crisp design and slick UI can remain uncompromised, and even become supplementary incentives for making a purchase.

iOS is better than Android when it comes to keeping your app’s development on time and staying on budget. As of September 2021, more than 24 000 distinct device models are working on Android, including smartphones, tablets, TVs, as well as fridges, and microwaves. Although developers can restrict your app from being installed on devices that don’t meet hardware requirements, it can be difficult to test your app on every device that it will be installed on. When creating an iOS app, you need to make it work only on a handful of recent iPhones and iPads, and that’s it.

Even though some developers view Apple’s strict rules as limitations, others view them as a kind of deliverance. They praise Apple’s approach for its straightforwardness and definiteness because it immensely streamlines their work. They’re not only saving time, though. When a developer doesn’t have to decide on every little detail, they can focus on making the unique and interesting parts of your app stand out.

Like every piece of software, iOS also has its limitations and shortcomings.

Should you create an Android app, an iOS app, or both?

In nutshell, while developing a mobile app, you can opt to go two ways: develop a native app, or a hybrid one. Both approaches have unique advantages.

Going native allows you to tap into the unique functionalities of a device. You can also more easily create resource-demanding apps that nonetheless stay perfectly performant. If you need to go fully native, you’d need Kotlin developers to work on an Android app and Swift developers for an iOS app.

But you should also note that 90% of apps currently don’t need you to use highly advanced and specialized native development. In most of the cases, choosing React Native would be a better option because this framework:

Considering the current level of advancement in the framework, a good development team can build an advanced application using just React Native. Using it, they can also develop a hybrid application creating an app for both Android and iOS at the same time.

You can read more about the differences between hybrid and native development here.

Android vs. iOS: which is better?

As you probably have guessed by now, the simple answer to this question is: it depends on your project’s specific needs. Like with any other project, before starting a mobile app development process, you should thoroughly reflect on your business goals, target audience expectations, development costs, timing and deadlines, and possible roadblocks.

You definitely should at least consider choosing iOS mobile app development when:

Regardless of your personal decision in this Android vs iOS app development debacle, working with expert mobile developers surely will increase your app’s chance for success. And since you’re already here, go ahead and check out our Mobile App Development Services or simply write us a message – we’d love to hear about your project.

Flutter or Xamarin For Mobile Development in 2022? 8 Reasons For Choosing Flutter
Written by  Michał Kochmański

Flutter vs React Native for Mobile Development—Which One to Choose in 2022?
Written by  Krzysztof Len