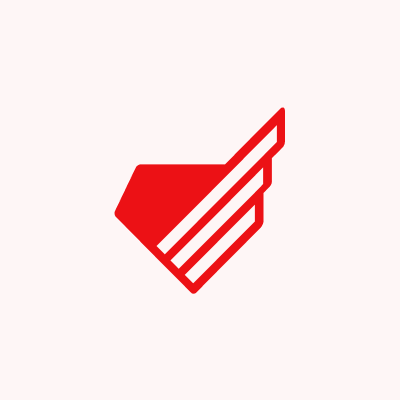 2017 was a real adventure and a genuine milestone for our team. And just in case some of us happened to forget what awesome human beings we’re working with, we’re going to write all the great stuff that happened last year down.

Well, Thanksgiving was in November, but January, the unofficial-although-internationally-recognized month of summaries and resolutions, also gives us a great opportunity to think back on what we’re thankful for. The list may seem long, but believe us, there was no way we could skip over any of the moments outlined below. Don’t have much time to read through our entire list? We’ve got you covered with an infographic. Hope it helps :)

Given that we’re in the service business, our staff is our greatest asset. That’s why we put so much time and energy into hiring more of the best people out there and making sure they’re a perfect fit for both the company and our clients.

And here we are: eighty-seven people who not only get the job done, but are a joy to be around. Definitely the kind of people you’d like to invite to your birthday party.

In 2017, all of our in-house teams expanded and our plans for 2018 are no less ambitious in that respect.

Below you can find the most recent photos of our faces. Cheers! 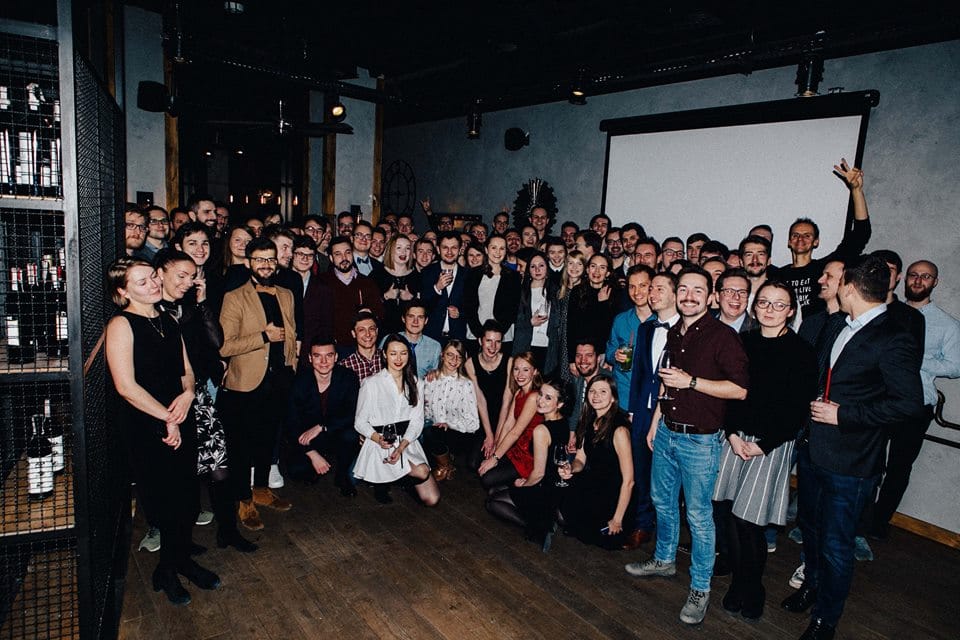 After the teams grew, it quickly became apparent that although we really appreciated having all of our Monterailers under one roof, our office got a little too cozy, cramped with our new arrivals on board.

Halfway through the year, we commissioned Dr. Karolina Dudek, a sociologist, to perform an in-depth study of the spatial and cultural needs of our staff. Using her observations and the conclusions from her study, we redesigned the planned expansion of our office space—this time around, we set the space up into separate project rooms instead of creating an open space environment like the one we have on our bottom floor.

After the expansion, we have access to an even more enjoyable working space, additional conference rooms, a chillout zone, and—finally—a dedicated room for our foosball table. No more “Keep it down!” messages flooding our #general channel on Slack...

Last year, our frontend developer Ania Konopka joined forces with other experts from our team and organized nine meetups aimed at students and future IT specialists. Organized under the auspices of the Wrocław University of Science and Technology, the series of events was named “Monterail Academy” and will definitely continue in 2018.

In 2017, the Monterail Academy events gathered over 500 attendees at eight talks and one workshop (focused on Vue.js, naturally). The events were designed to help young people prepare their portfolio, encourage them to learn new things, and support them on the way to their first job.

Both the talks and the workshops were chock-full of insights that you won’t hear in a classroom. If that appeals to you and you like beer (we know we got you at this one!), follow us on Facebook for future updates about the Academy. 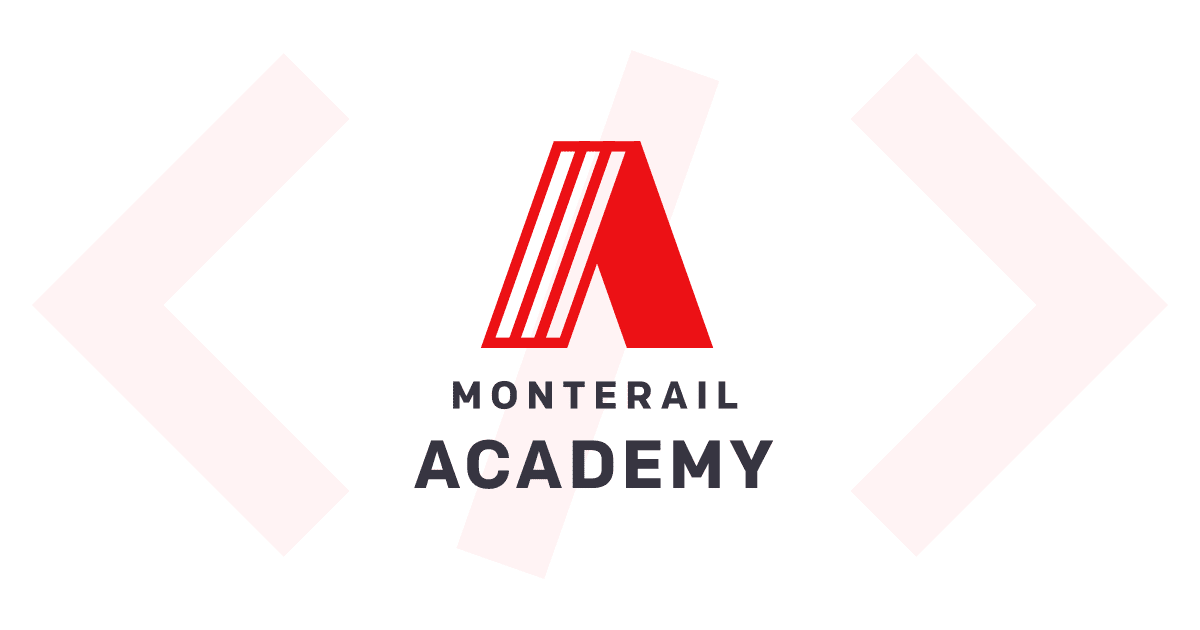 4. We Launched the “Girls in IT” Initiative!

Being a part of the tech environment, we feel that it is our duty to struggle against female underrepresentation in the industry. Developing diversity inside teams is not just about justice and equality—it also has concrete business and financial consequences.

Alina Melnyk and other women on our staff noticed that very few girls and young women learn either in high school or in college that the tech industry is a great place to be, regardless of what your gender is. To counteract that state of affairs, we decided to launch the “Girls in IT” initiative, and hosted three of the meetings at our offices, ultimately attracting over 400 attendees in total. The feedback was just astonishing. For students and women from other industries, these meetings turned out to be a one of a kind opportunity to learn something about the tech sector from people involved with in on a daily basis. You can read a short summary of the first edition on our blog.

Kasia Tatomir, our head of operations and current coordinator of the initiative, is planning to continue the series in 2018 and Monterail is definitely on board for the ride. Exciting times ahead, indeed!

5. Over 1,500 People Attended Events at Our Offices

Speaking of events—the ones we’ve mentioned above have started only in 2017, but the truth is that most of the events we’ve been holding at our offices have been with us much longer.

Our office space is highly adjustable so it’s easy to hold events on the premises, while the company culture emphasizes learning and sharing knowledge. Thus, it feels natural to keep our doors open to any and all tech- and design-related initiatives.

In 2017, we were busy organizing monthly meet.js meetups, quarterly UX Wrocław gatherings, and our local edition of Service Jam. This is one of the ways in which we give back to the community. In total, the twenty-four events we organized and co-organized in 2017 have brought over 1500 people to our offices. Big thanks to Krzysztof Jung, Marta Hnatko, Ania Konopka, and Paweł Hawrylak for handling and overseeing all of these initiatives!

6. Monterail Recognized by Deloitte for the Second Time

Year after year we’re working hard to grow as a team and as a business. Being recognized by Deloitte for the first time was an incredible success for us, so imagine our delight when in 2017 Monterail was once again included in the Technology Fast 50 Central Europe and the Technology 500 EMEA rankings.

The ranking recognizes the most dynamic technology companies in the region and we’re happy to have made the cut. This is a great honor for the whole team.

Also importantly, because of the now two awards we’ve received, an official “award shelf” has been installed at the Monterail offices and, let’s be honest, who would want one? 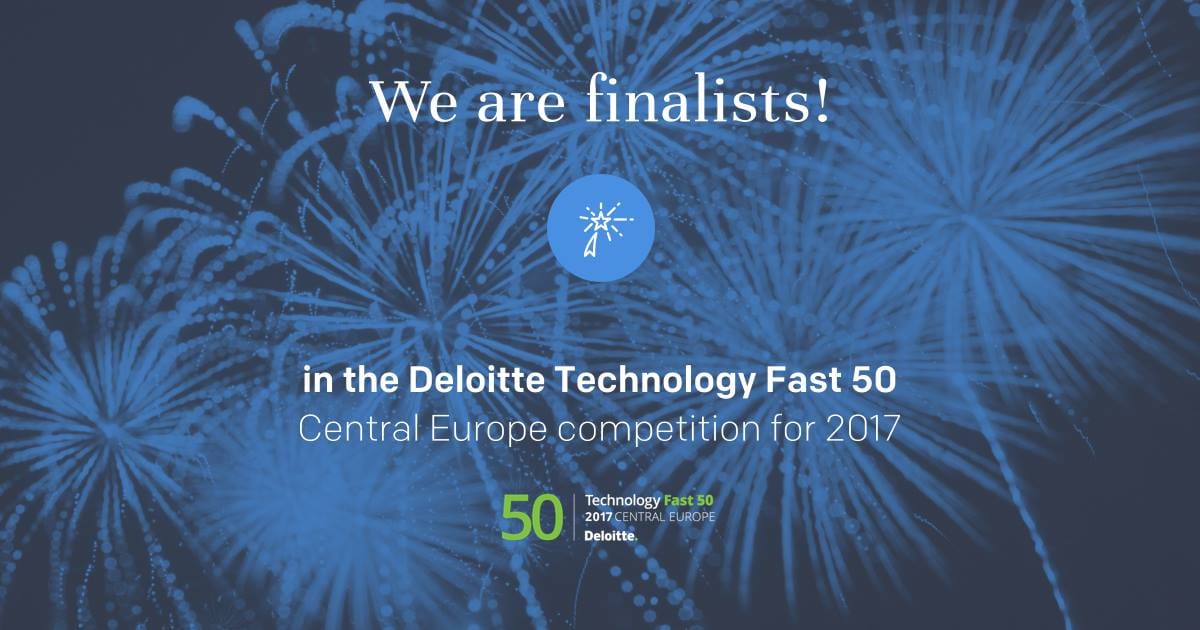 7. We Have New Roles Inside Our Team

In 2016, we hired the first person to staff marketing department. A year later, we finally managed to stand up a business development team comprising four sales and marketing experts. This is huge. Although we’ve got so many amazing tech-savvy staff members with great marketing and sales instincts, we needed a dedicated team to fill those roles in order to successfully scale our operations. Jan Potoczek, Kamil Pawłowicz, Marta Klimowicz, and Karolina Gawron do just that.

With Marta Hnatko joining us, we officially established an HR team. It now has two permanent members—Marta and Mateusz Sławiński—and a handful of temporary members making up the so-called recruitment squad.

For the first time in Monterail history, we hired a DevOps engineer—Robert Wysocki—who is now evangelizing this particular approach to other teammembers.

In order to comply with GDPR regulations coming into force this May and to provide the best security for us and our clients, Monterail has been joined by an in-house lawyer—Kamila Koszewicz.

Last but not least, our office finally has its own support team—Aneta Wodyńska and Robert Szczęsny—who coordinated the expansion of our office space and care for our day-to-day well-being.

8. Our Co-Founders, Bartosz and Szymon, Recognized in NE100 List

Szymon Boniecki and Bartosz Rega, co-founders of Monterail, were recognized in this year's New Europe 100 list. According to its authors, "The list is about individuals from the region who are changing the world and improving people's lives with ideas that scale up in the digital world."

We are honored that Monterail efforts and the values we cultivate inside and outside the company have been recognized this way! 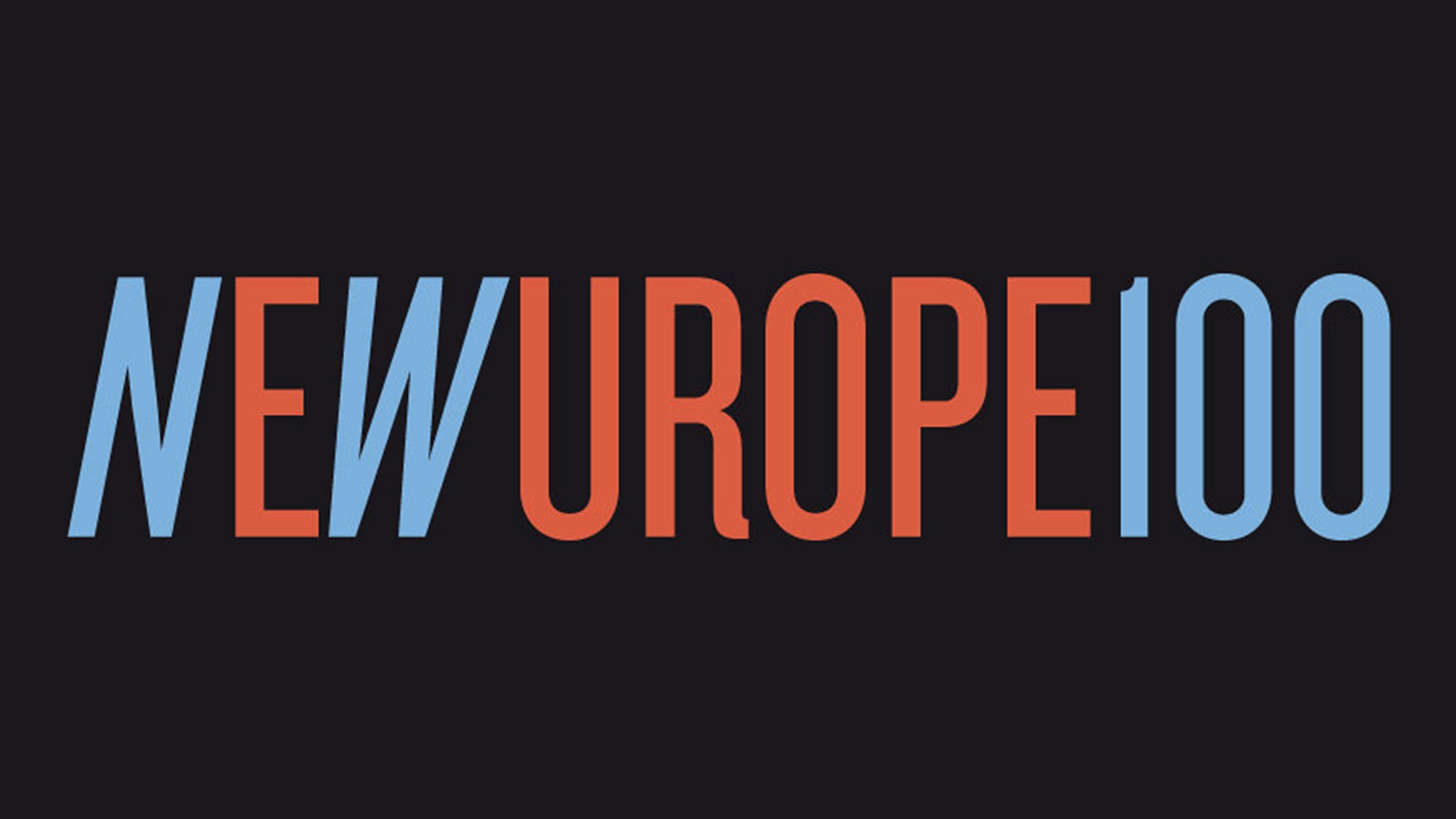 Definitely the loudest event we have organized in the history of Monterail. VueConf was the first international conference dedicated exclusively to Vue.js.

Over 300 developers from all over the world? Check. Inviting superstars from the Vue.js community like Evan You, Sarah Drasner, and Sean Larkin? Check. Drinking lots of Vuehitos at the afterparty? Check. 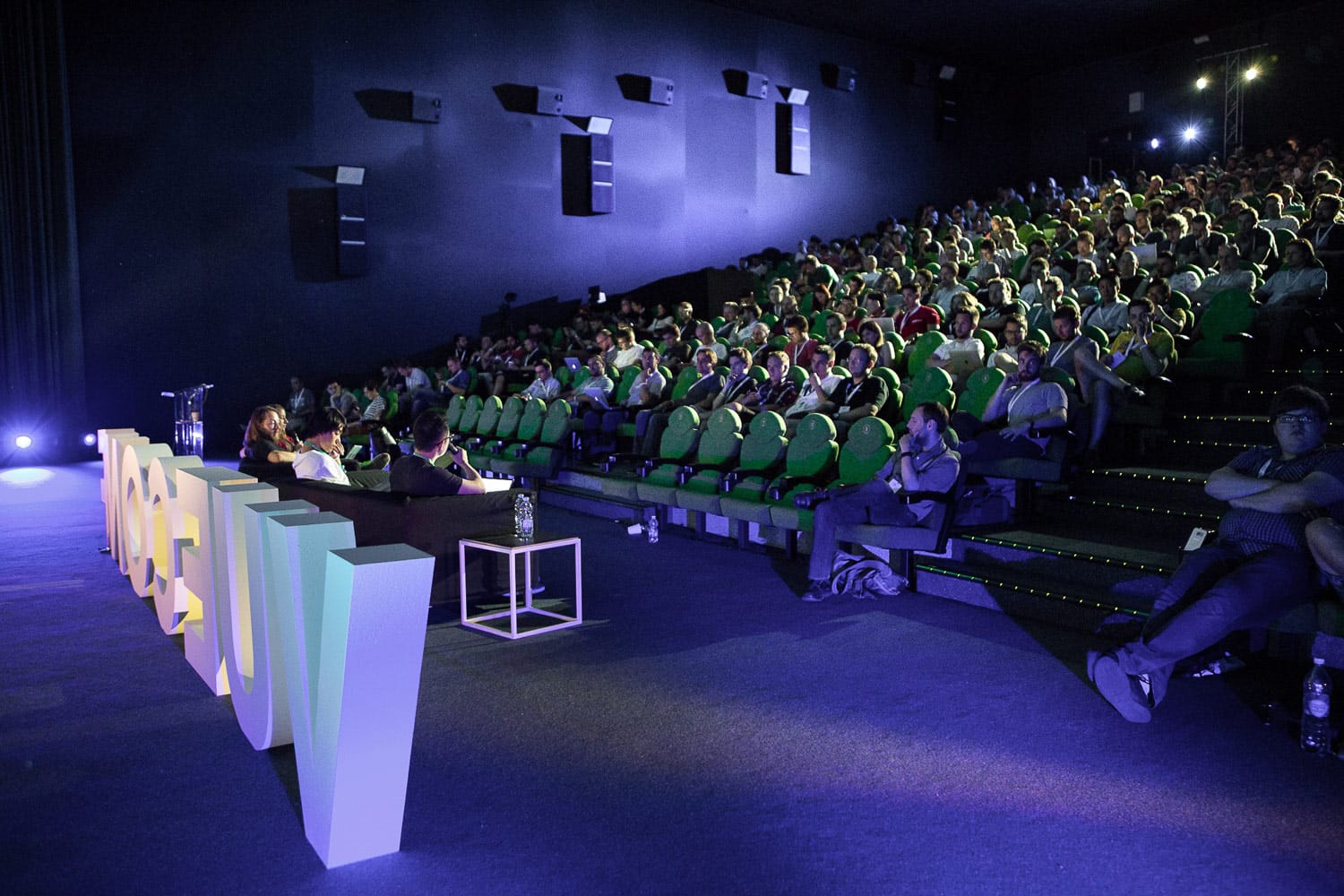 Our blog post on redesigning Thunderbird got a lot of buzz in the tech press. The UI refresh concept authored by Krystian Polański got a lot of traction on reddit and Dribbble and made some people shouting “Release it now!” at us—or at least left comments that sounded like that. Fast forward a couple of months and the first version of the “Monterail” theme is now an official add-on!

There is another chapter to this story, but we don’t want to spoil the conclusion of the story just yet... 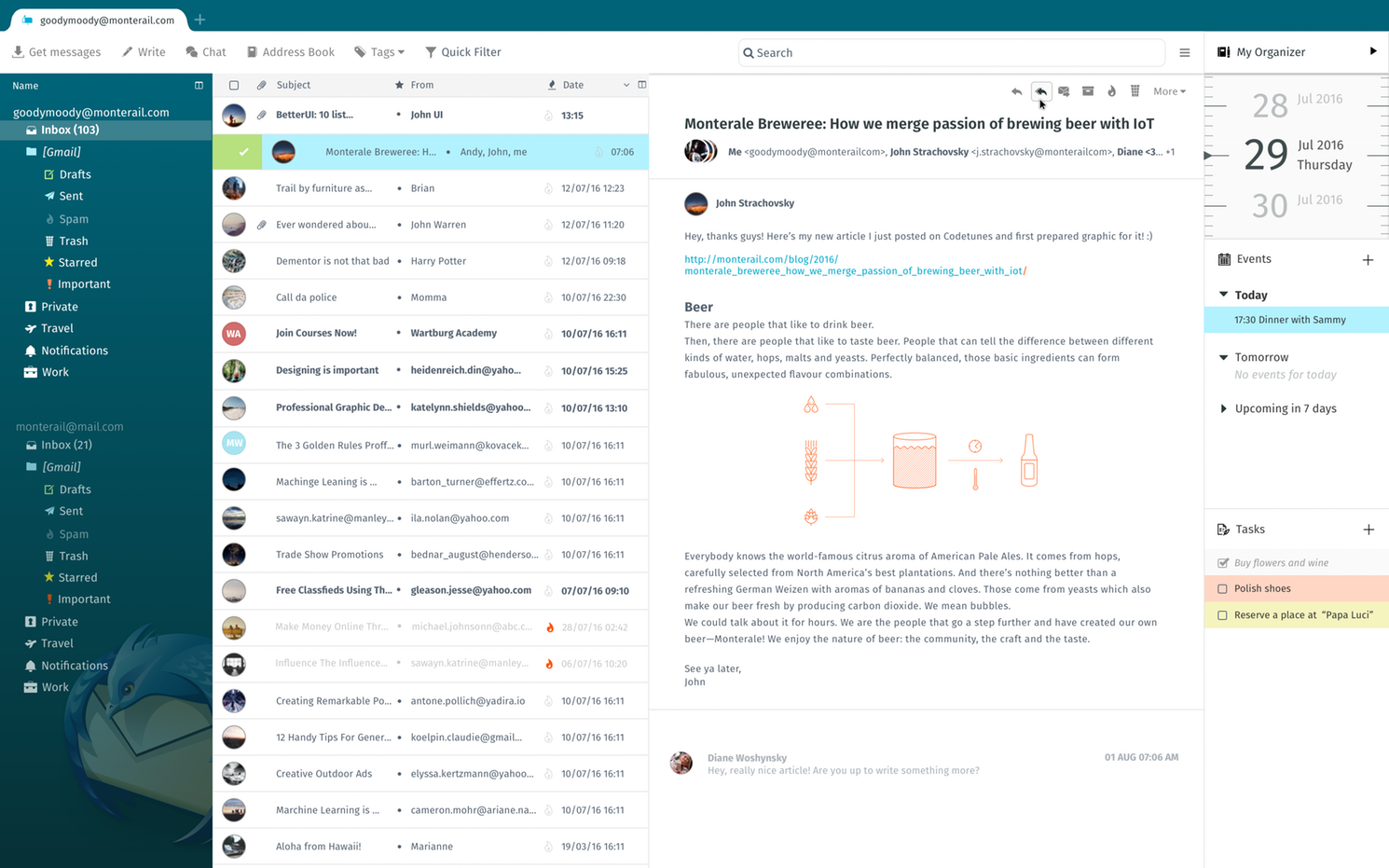 11. The “State of Vue.js” Report Got Downloaded Over 6k Times

The State of Vue.js report is another milestone in our mission to evangelize Vue to developers and businesses. We’ve crafted a 80-page-long compendium for developers and technology businesses interested in making educated decisions about their stack. It includes multiple case studies and data collected from Vue.js developers. Today, it has been downloaded over 6,000 times and the number continues to grow.

Drafting such a comprehensive report on technology we love, use, and recommend to all our new clients was definitely one of the greatest adventures we’ve ever embarked on. Let’s savor the number again, shall we? 6,000 downloads. Six. Thousand.

At some point in your lives, all of you decided to join Monterail and every single one of you made it a little different and a little better company. Thank you for getting weird sometimes (just check out the second part of our Ultimate Christmas Song for proof). Thank you for being open to new ideas and challenges. Thank you for pursuing knowledge and self-development. The highs & lows of this year were nothing but an amazing adventure and we can’t wait for what 2018 will bring!