How To Deal With Cultural Differences in Project Management? Imagine that you talk to one of your clients from the USA and instead of a brief small talk, you go straight to the point of your meeting. Or you disagree with the Japanese stakeholder in a straightforward manner.

The best case scenario, the client finds you weird. The worst–they will think you’re not familiar with their culture at all and therefore it might become a trouble on much more serious levels than just casual conversation. Cultural differences can sometimes make it or break it.

Meeting people from various countries and cultural backgrounds is common for project managers in a software development company like Monterail. As we work with clients from all over the world, I find it crucial to know HOW to work with them so that the client is happy and cooperation goes smoothly.

So, how to deal with it? The key is to identify the differences, understand how they can influence areas of daily business cooperation and then learn how to act in certain situations.

In this article I’m going to talk more about four areas: communication, trust, feedback and persuasion which I find especially important for the project success. I’ll also share with you the tips I learned during my PM’s journey and show you that it’s not so difficult after all. Let’s embrace the culture.

Watch the video presentation that I gave during the MonteTalks event.

The Importance of Culture Awareness

The influence of cultural differences on main areas of conducting business is extensive. It impacts everything from how people convey messages, how negotiations are handled and trust is built. Knowing these things and how they vary across cultures gives you a huge advantage as a Project Manager.

The first thing that I would call the benefit of being aware of cultural differences is basically better cooperation with other people. Fewer misunderstandings, more clarity. Besides that, culture awareness helped me:

What’s more, learning about cultural differences is taking care of diversity in the workplace. Developing your cultural awareness lets you have more meaningful interactions with those around and brings people together.

How to squeeze something rather intangible as culture? In my opinion one of the best and most comprehensive ways is using scales compiled by Erin Meyer in her bestselling book "The Culture Map" (highly recommended!). She’s the professor at INSEAD, one of the leading international business schools who taught thousands of executives how to work more effectively across cultural differences. Meyer mapped on a scale eight factors that are related to business interactions and can be seen very differently across the globe.

Analyzing communication from a cultural perspective lets us understand how various cultures build and convey message so in general how people from different cultures see what it means to be a good speaker. What are the two angles of the scale?

In high-context culture people may perceive low-context communicators as inappropriately stating the obvious (“You talk to us like we are children”.)

No matter the culture, I recommend these universal communication practices that we use to keep our clients happy and in the loop.

How are cultures placed on the communication scale?

When talking face-to-face, it’s generally easier to understand a speaker's intent and even adjust to their communication style. But the written word is less forgiving. Messages could be misunderstood because of little things such as a greeting or lack of it, response time or explicitness.

Etiquette says that even if you have nothing to say, it would be nice as a receiver to inform the other side when you will have. Silence means something negative, potential problems.

Low-context cultures favor communicating with the use of organizational charts (showing who works for whom), titles (describing who is on what level), written objectives (explaining who is responsible for accomplishing what).

It’s pretty common to receive a reply after 4 days saying “Sure, we did it” so don’t take the waiting time personally. Written documentation is less necessary as it may be treated as lack of trust instead of professionalism.

This one is tough. I would say giving (and receiving) negative feedback is generally not the easiest thing in the world and when you add a different culture-based approach to the table, it can get tricky.

Generally we divide feedbacking process into direct or indirect. The first one is characterized by honesty where negative messages are straightforward and not softened by some positive aspects. More indirect cultures on the other hand, apply tons of diplomacy into that and appreciate being rather delicate, criticizing only in private and wrapping the “bad news” around some positive messages.

"Evaluating" factor lets us understand that managers in different parts of the world are conditioned to give feedback in a drastically different way.

Chinese managers never criticize a colleague openly, in front of others.

Russian managers learn to be honest and gives the message straight

American managers are trained to wrap positive messages around negative ones. 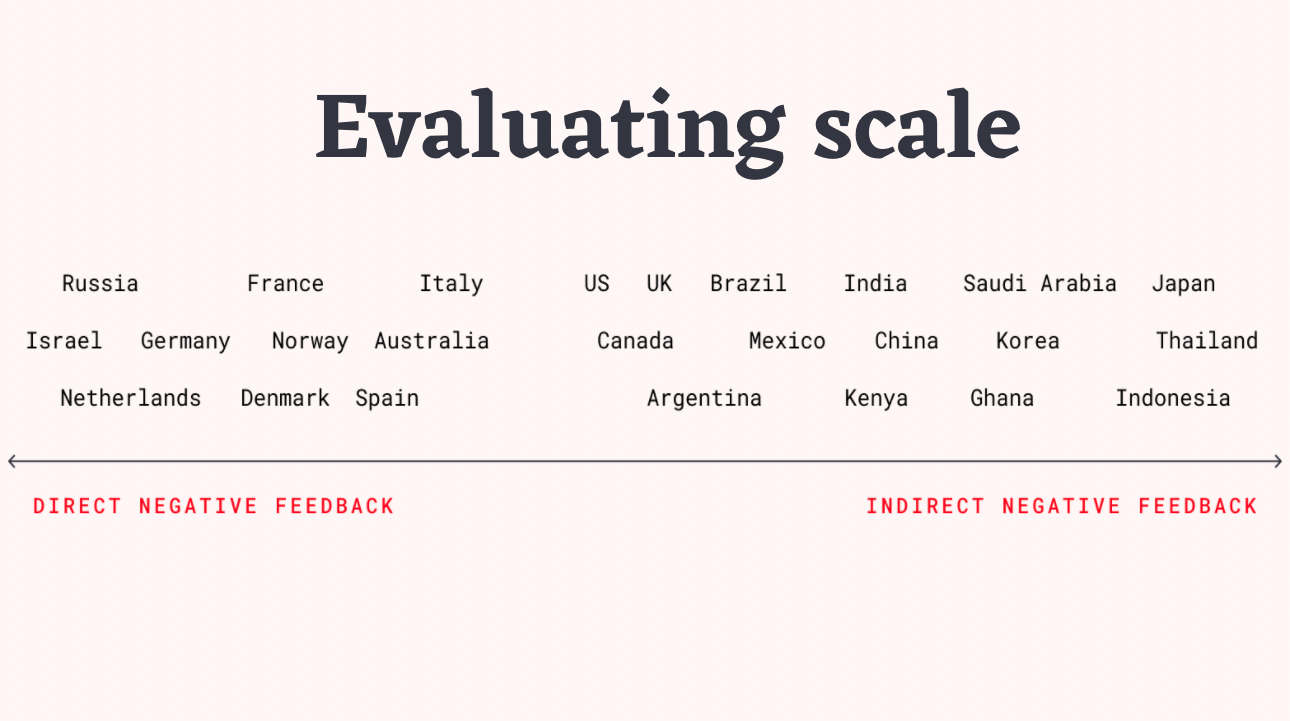 Some countries are differently located on the communication map than on the evaluating scale. For example, Americans are low-context but indirect negative feedback culture, French are high-context, but pass negative feedback directly. 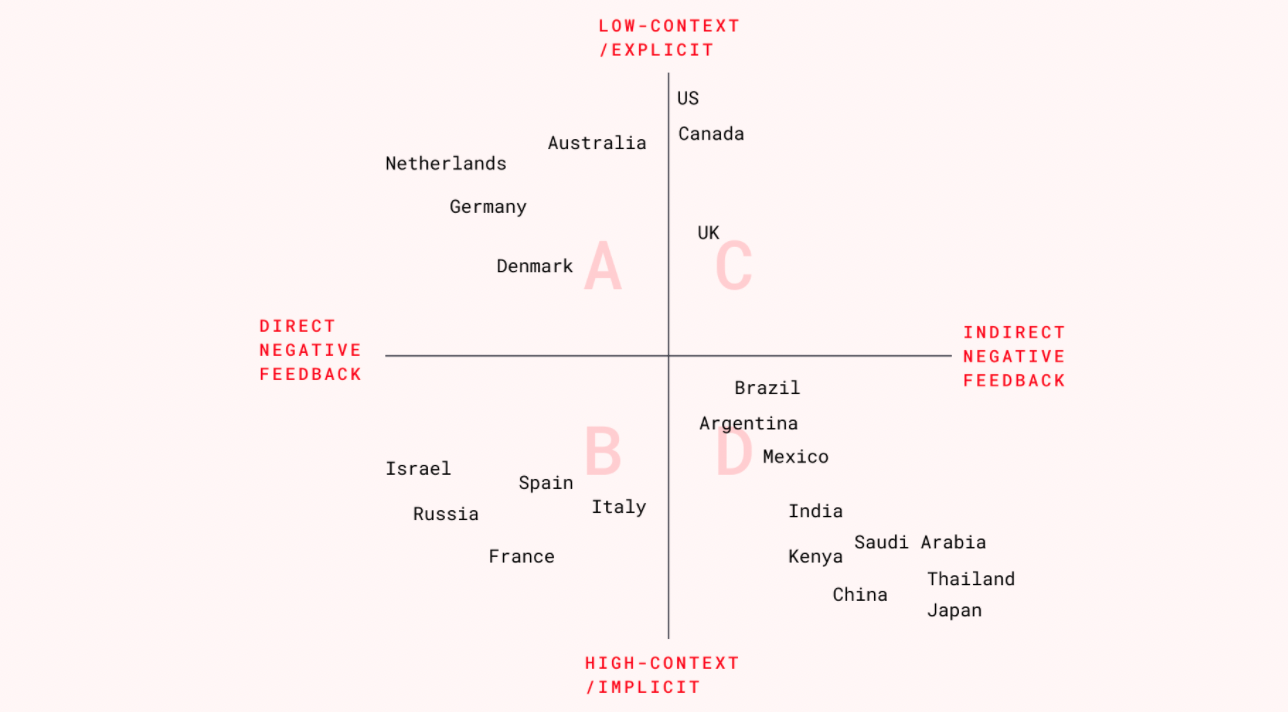 So, how to get around these rules and not get crazy?


Persuading may be also seen differently across the globe. It shows how different cultures build arguments to persuade successfully. It’s a very useful skill for project managers when we need to convince clients or the team to follow certain approaches during development.  Persuading depends on two styles of reasoning: principle first and application first.

Principle-first: based on deductive reasoning, derives conclusions or facts from general principles or concepts.

Example: All technologies get old. > Node.js is a technology > Node.js will eventually die out.

Application-first: based on inductive reasoning; general conclusions are reached based on a pattern of factual observations from the real world.

Example: “We've always used Jira for keeping track of the project's progress and it's worked well. So I think that Jira is necessary for our next project, too."

Get straight to the point!

They are intelligent people. Why would they swallow my argument if I haven’t built it carefully for them from the ground up?

Most people are capable of practicing both BUT:

It’s extremely useful when we try to explain and negotiate different approaches in software development. What if you talk to a mixed group of people? As both groups know how to combine both, try to go back and forth between theoretical principles and practical examples. Remember to keep the balance and things should work out eventually.

You can have perfect communication skills and understand the other person’s feedbacking culture but when there’s no mutual trust, the relationship is on the line. Trust is key to any project success. So let’s see how trust-building looks across cultures.

The trust between people from different cultures is built based on two types of trust: cognitive trust and affective trust. 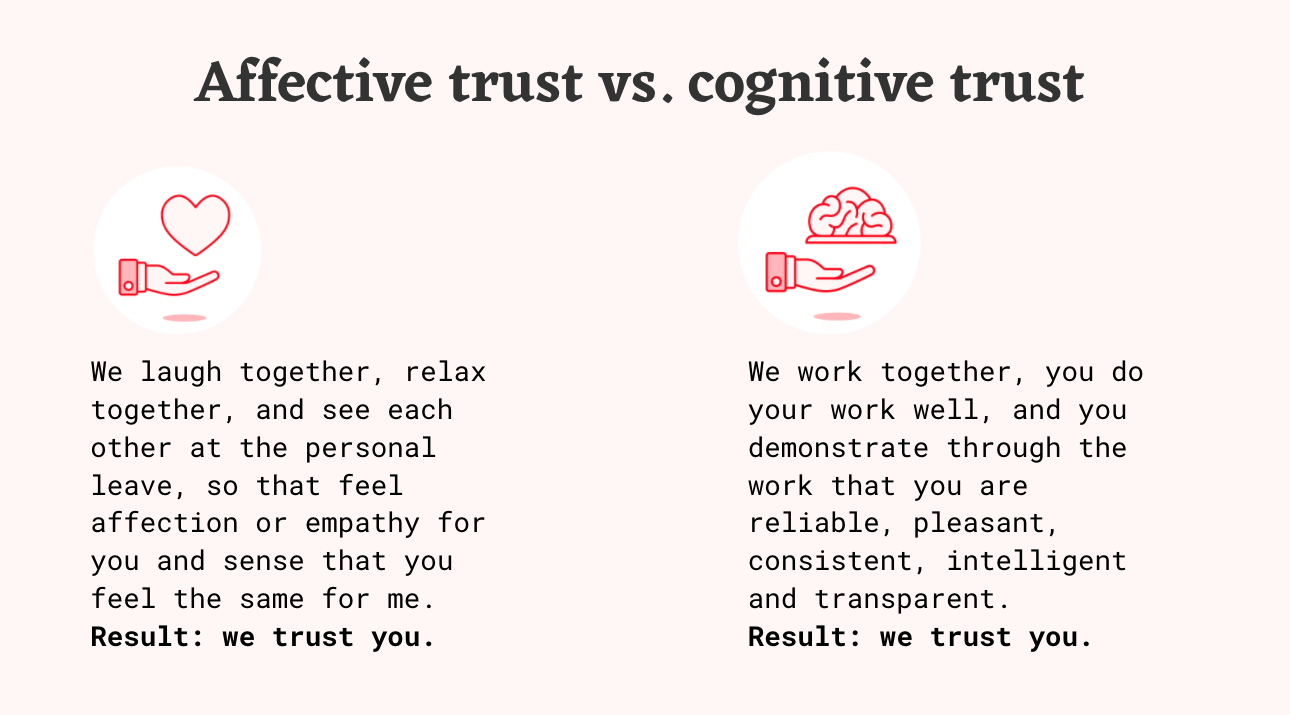 Americans are representing task-based trust. A clear line between cognitive and affective trust. They think mixing in business is unprofessional.

Business is personal
Chinese are representing relationship-based trust. They mix both approaches.

How to approach different cultures of trust? First, choose your communication medium.

Although cultural differences might be troublesome in project management, we might look at them as enrichment of our daily work and personal growth opportunity.

My last advice for moving smoothly in different cultural frameworks would be - when interacting with someone from another culture, try to watch more, listen more, and speak less.

“You have two eyes, two ears and one mouth. Use them accordingly.” - Erin Meyer