Flutter vs Ionic: Which Cross-Platform Framework To Use in 2022 When developing a multi-platform application, there are many frameworks to help you get started. Two you might consider are Flutter or Ionic. In this blog, we’ll explore the similarities and differences between Flutter vs Ionic to help you decide which to use for app development.

Ionic is an already popular framework, which brings web technologies to app development. It has a huge amount of third-party libraries and the possibility to integrate React, Angular, and Vue. Meanwhile, Flutter is a quite young player, which shows fast-growing popularity. It uses its own approach in multiplatform development based on the 2D graphic engine.

What is Flutter - Overview

Flutter is an open-source framework that provides us the opportunity to create multi-platform apps. It was created by Google and uses the Dart programming language.

The main idea behind this framework is a fast building of UI with comparative to native by its looks and performance both. Instead of all regular ways of building cross-platform and multi-platform applications in other frameworks, Flutter doesn’t use any bridges, native or web components. Instead, it uses the Skia graphic engine to render the whole UI.

It also supports communication with native features of the target platform through platform channels. At the current moment, Flutter allows us to write apps for the iOS, Android, Web, macOS, Windows, and Linux platforms.

What is Ionic - Overview

Ionic is an open-source framework for building cross-platform apps using web technologies - HTML, CSS, and JavaScript. It has the possibility of integration with React, Angular, and Vue.

It makes the framework easy for developers with web experience. Cordova is responsible for the native features of a target platform. As a result, we have an application that uses web views for its layouts.

When it comes to popularity, Flutter is the most used cross-platform mobile framework, according to a 2021 JetBrains survey. Ionic is in fourth place in the developers’ community.

When we are talking about community, we know that both frameworks are open source, which means that everybody can impact and try to contribute to it. We can see all statistics for contributions to Flutter and Ionic repositories.

Here we can take a look at the contributional flow of Flutter:

Also, we can see these activities when taking a look at pull requests and issues statistics for the last month.

Each of the frameworks provides an opportunity to create and use third-party libraries.

Flutter has its own pub.dev website where you can find each library released by community members. Here is an example of a common library page there: 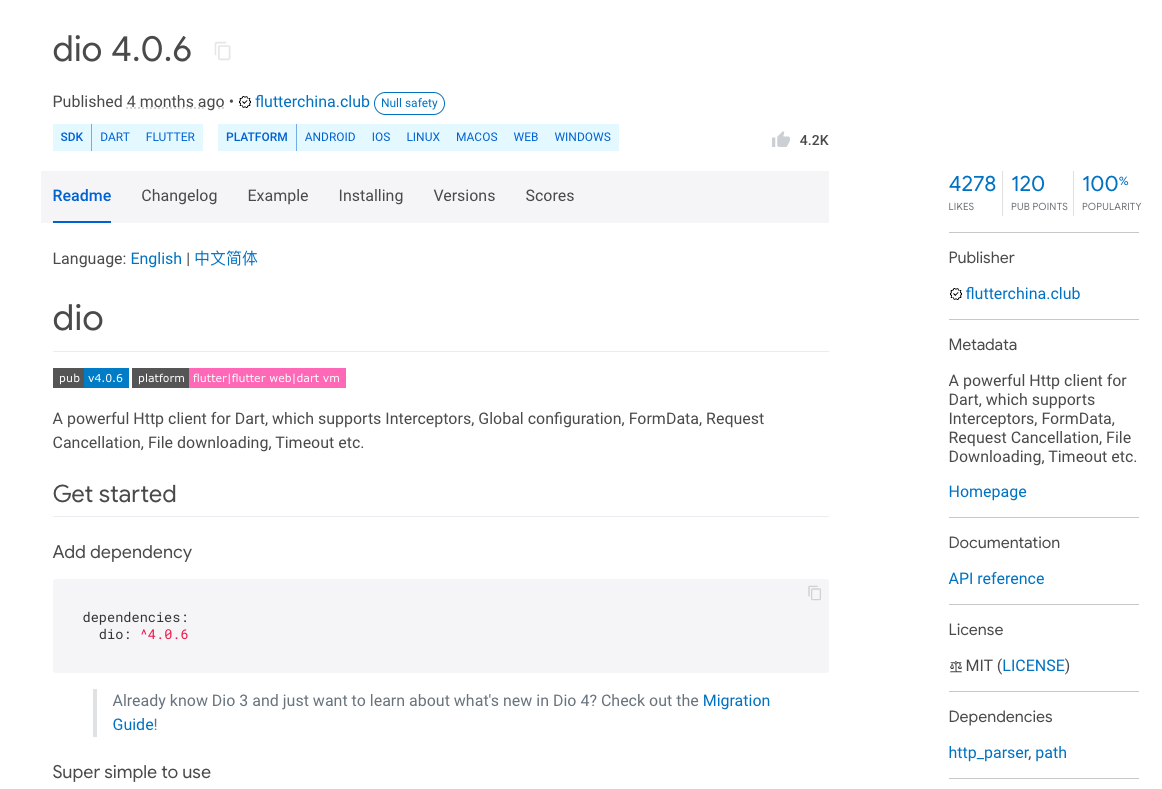 Ionic uses the well-known NPM package manager, and here is an example of a library page: 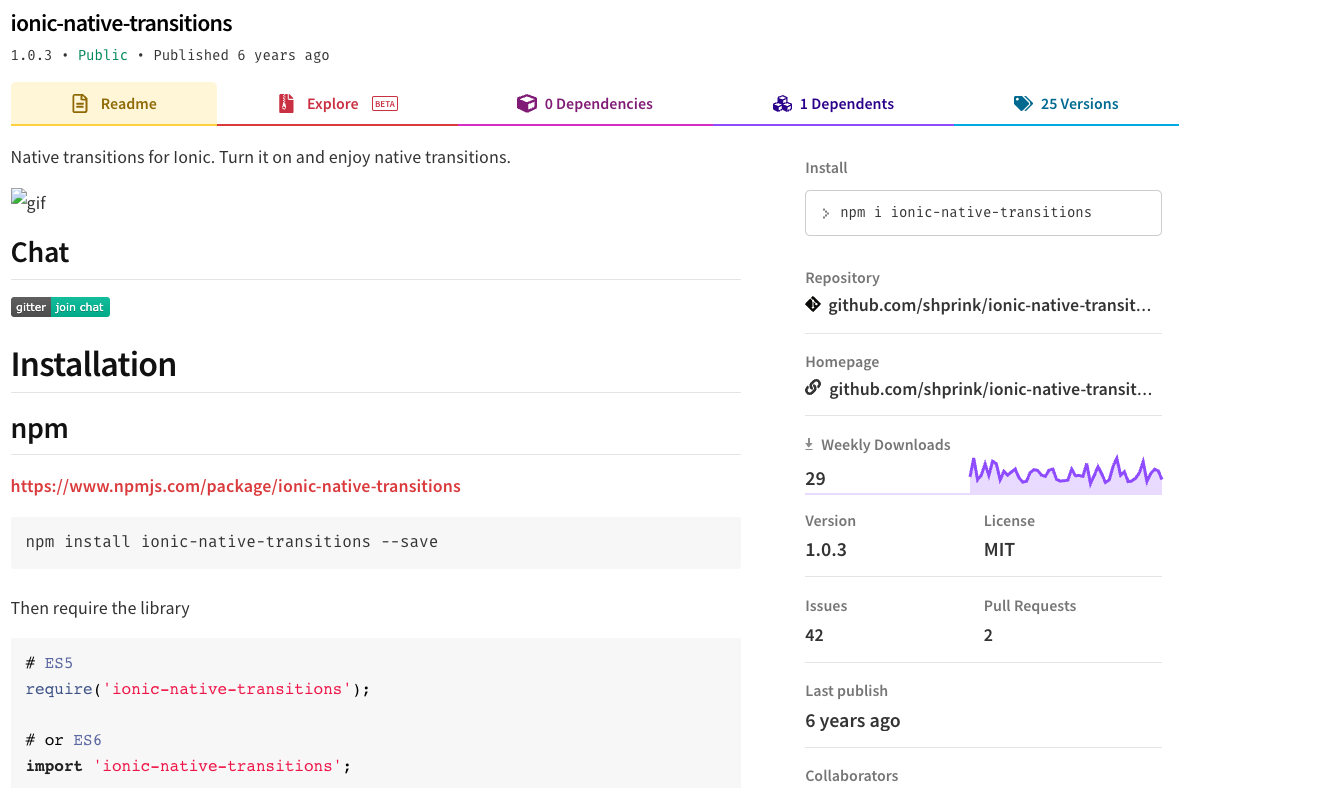 The Flutter team provides us with a cool page on their official website with the most popular use cases of Flutter! There are a lot of cool and interesting projects to take a look at, such as: Also, they have a YouTube channel where we can find the interesting playlist “Flutter in action”. There we can check out some histories of small start-ups, just interesting and unusual usage of Flutter, etc.

Ionic also has its own page with interesting examples. Here are a few most popular ones:

At the time of writing, Ionic didn’t have any official YouTube channels comparable to Flutter’s.

To compare performance, it would be nice to have a deeper look into the idea of how these frameworks work.

Flutter, as mentioned before, uses the Skia graphic engine, so here we don’t have any “connectors” between native components and Dart code. Every UI component is being rendered in Skia without using the native part, providing us with optimization and performance compared to native.

Ionic, on the other hand, uses web technologies, which are well known, but of course, it can’t be just “interpreted” to native UI. So here we have WebView to render our UI. It decreases performance a bit and cannot be fully compared to native. Also, it generates some limitations in the UI building process, so creating an app that “feels” and “looks” native is a tougher challenge. Anyway, it still looks and feels nice for smaller apps or PWA-based solutions.

From a developer's perspective, it is hard to provide a universal answer here. But we can take a look at some pros of each framework.

As mentioned a few times earlier, Ionic uses web technologies (HTML/CSS/JS). Any web developer can simply and quite quickly get into this framework and start building projects. The idea of building UI and logic here is very similar to web analogs. All the tools are also similar.

When it comes to Flutter, we have to learn a new programming language. It is still not a big deal, since it is very similar and comparative to JavaScript, but a bit more strongly typed and with a bigger bias toward object-oriented programming. Also, it provides the “tree of widgets” idea of building apps and it requires understanding at least one of the most popular state managers to create high-quality and organized business logic.

Learn more: 7 Things You Need to Learn as a Flutter Developer–Guide For Beginners

The documentation is well written for both frameworks. They contain information about setup, development process, integration, and code convention.

The cool thing about the Flutter documentation is the “Flutter for” category. It hosts great guides for developers who want to migrate from their current technology to Flutter.

When to Use Ionic or Flutter?

Considering everything described above, we can see that using web technologies in Ionic is a great decision for PWA apps, proof of concepts, and small applications. Flutter also seems weak when it comes to the web so far.

But if your goal is to create a bigger product, MVP with the potential to continue development, or if you want an app that feels more native, Flutter would be the better choice. It has stable support from Google, popularity, and a larger amount of developers and contributors. The Skia graphic engine allows you to keep performance comparative to native solutions, meaning you can create more advanced solutions.