Brief Summary of the Vue.js Core Team Sprint and Their Visit at Monterail

Is there anything better than working on one of the most-loved JavaScript framework out there and doing it with eight other smart people in one room? If you’re nerdy enough and you love Vue, the most likely answer is: nothing.

Last week was definitely pretty exciting as far as the Vue world is concerned—nine members of the Vue Core Team paid a visit to Wrocław, Poland for a weeklong sprint. The Core Team usually hangs out on the Internet and individual members know each other mostly from different conferences and meetups. Their Wrocław trip marked the first time ever that they worked together on the ecosystem side by side and what a productive meetup it was—aside from eating great food and downing a couple of beers, the Core Team members ended up making some really, really great stuff in the process.

One question remains—how did this whole thing come to pass?

According to Alex Kyriakidis, “Guillaume (Chau) was pretty excited about the idea of meeting together and he laid a lot of the groundwork for it. Eventually, Evan You (the creator of Vue.js) offered us access to money from Open Collective, donated by kind people who sponsor the framework.”

Vue.js Sprint and Summit in Wrocław in full glory pic.twitter.com/mCMFtkdLDk

Given that we’re good buddies with the Vue Team (hello VueConf, Vuelidate, and State of Vue!), we decided to invite them over for some part of the sprint to our office. Over the course of their stay, a number of great things happened: 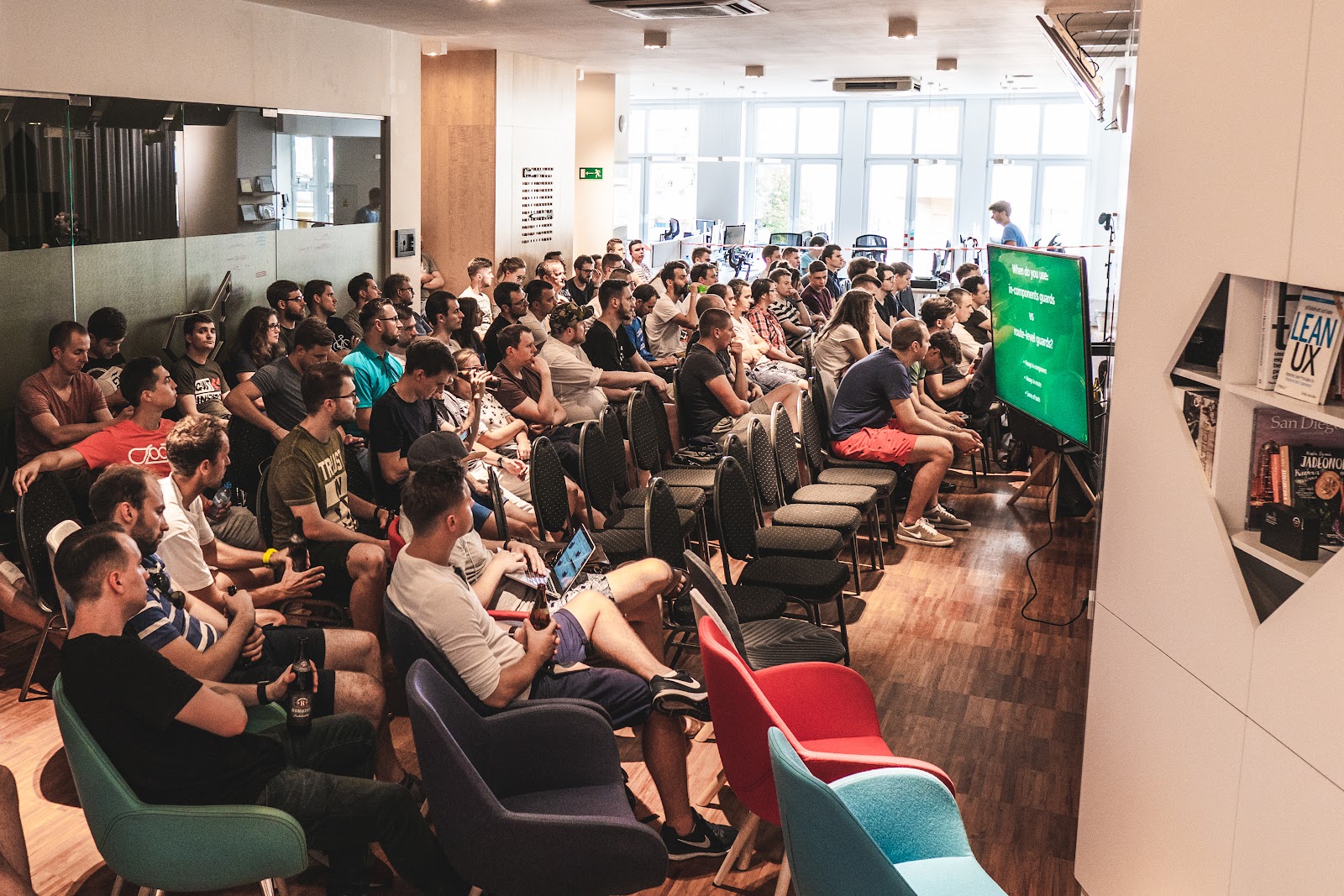 Many people dropped by the Monterail office for the Vue.js Core Team Summit and to meet the Team. 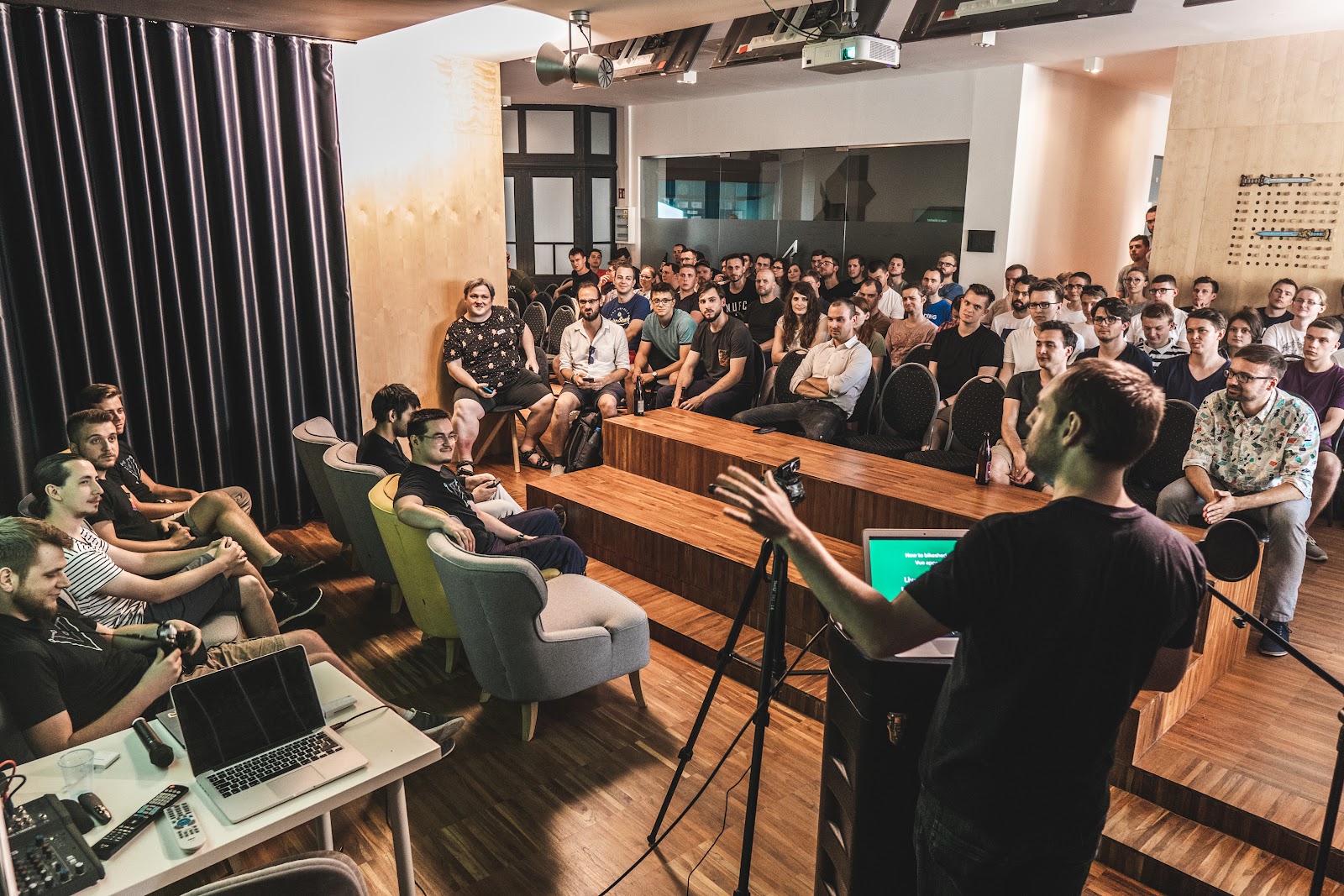 During the meetup, Chris Fritz organized a one-of-a-kind Q&A for Vue Core Team Members and the audience to explore similarities in their usage of Vue.

And I definitely wouldn’t be myself if I didn’t take a chance to talk to some of our guests about the sprint, Vue itself, and how cool it was to visit Wrocław and work in our office :)

Just note that the Team has worked on many different things (like devtools NativeScript support) that I didn't manage to mention here. Follow Vue.js on Twitter—I believe it will be most reliable source about other perks of Vue Sprint!

How is working in this sprint formula different from your day-to-day work on Vue.js?

Rahul Kadyan: “Sharing my thoughts and knowledge with other team members directly makes solving problems much easier. The time and focus that we didn’t have to spend on online communication could actually benefit some crucial aspect of the project. On a daily basis we use Slack for messaging and I must say it’s a bit limiting. It’s simply better to discuss things live.

Alex Kyriakidis: “It is a unique experience. I’d say we were about ten times more productive, because we had time to brainstorm, discuss, and help each other. We even came up with some features to build we hadn’t thought of before.”

Michał Sajnóg: “It was awesome, seeing those guys in real life for the first time. And it’s been a great experience so far, I hope we will get to repeat it soon. Not every Core Team member made it to this one, so we’re planning to organize something again in the future. We got to work on different projects that we haven’t dealt with before, and I had full access to people that worked on a specific repository before me and the opportunity to get first-hand advice from them.

Guillaume Chau: “It’s way easier. We can talk to each other directly when we have questions, but also coordinating work between different tasks goes way smoother. It made us more efficient. I feel that after four days we’ve done so much!”

Nick Messing: “In everyday lives we have full-time jobs and other distractions so even important things take us months to complete. When it comes to big things, like Vuex state editing, a huge feature everyone asked for for a long time that Alex is working on, you need a few days to fully concentrate. I normally don’t have even two days in a row just for Vue. And this time we could dedicate a full week.”

What are you working on during the sprint?

Alex Kyriakidis: I mainly worked on Vue devtools, fixed some bugs, and implemented some feature requests. The feature I feel most happy about is that you can now edit Vuex state in Vue devtools like component’s data. It’s a feature that many people, including me, has been requesting for a year or so. Now I can’t wait to publish a new version of devtools. I must say devtools are something scary to contribute to and I wouldn’t pick it up if it wasn’t for the sprint. Working with Guillaume and being here was very encouraging.

Nick Messing: “During the sprint I’m working only on JSX. I joined the team as a maintainer of JSX, but I thought nobody actually needs it. So I asked myself—what’s the point? Then during one conference in Romania I saw an example of using JSX and Vue which gained a lot of hype on Twitter later on. People said they’re ready to give up everything they use to switch to Vue if it worked that way. So I figured out JSX simply needs proper support. Therefore my goal during the sprint was to rewrite from scratch most of the support to make it accessible and have every feature from Vue accessible in JSX as it was quite limited until now. And I’m happy with that I achieved. This may open the door to many developers who are used to other frameworks like React.

Rahul Kadyan: “I spend most of my time on devtools. We introduced configurations where you can preconfigure your devtools with themes. You can also remotely debug your app now. And most importantly: you can see functional components in devtools!”

.@znck0 has been working on something really exciting! Stay tuned! 🔥🔥🔥 pic.twitter.com/LNmi3J4t7K

Michał Sajnóg: “I made sure that Vue devtools work with Cordova applications so it’s possible to debug them now. I continue to work on eslint-plugin-vue so we have more rules to check our code. I added the new configuration platform for vue-cli plugin so in the next vue-cli release it will be possible to configure the whole ESLint through the UI.”

Guillaume Chau: “Devtools for Vue which are getting tons of new features and announcements. During last two days I’ve worked on optimizing and refactoring devtools so now you can commit 20,000 mutations in an instant and they will be displayed in like 2 seconds in the devtools so this is a whole new experience comparing to what we have now. Especially for a companies which build medium to big apps and have big Vuex store. And now I’m working on entire new tab in devtools—a performance tab so you can track various metrics of your apps. Devtools are getting way better.”

Commiting 20,000 mutations in one frame now takes less than 2 seconds to be displayed in the @vuejs devtools. Loading the last commit vuex state takes less than a second.
Emitting 10,000 events now displays them almost instantly in the devtools events tab as well. 🔥 pic.twitter.com/Gn3aMWYJj7

How do you find Wrocław and working in our office?

Guillaume Chau: “I’ve been here last year during VueConf and I must say it’s a nice city. It’s great to see that companies like yours are open to use their office and therefore support Vue in this way.”

Alex Kyriakidis: “I really liked working at Monterail’s office. It’s so modern, and the area for meetup was fantastic. It seems to be fun working here. This is something I miss in working remotely. Lounge room, Xbox, foosball room, pool table… Being able to do all those things and hang out with Vue friends here for a couple of days was really nice.”

Nick Messing: “Wrocław seems very European. That is good and bad at the same time. It feels comfy, easy to move around, but nothing surprised me here! Simply feels like Europe.”

Michał Sajnóg: “We’ve got nice apartment in the city center so it’s close to your office and good dining places. So far so good!”

Rahul Kadyan: “I thought the weather will be a bit cooler—that was surprising! Your workplace is really nice and it’s great to work here. The city is awesome. We’ve eaten a lot of great food here. It’s different kind of food I’m used to, but it’s nice.”

Thanks Alex, Nick, Guillaume, Michał, and Rahul for talking with me. Also big thanks to the rest of the Vue Core Team for putting their hearts and souls into Vue.js.

Keep your eyes peeled, because more Vue goods are on their way.

→ Sign up for Vue.js News for awesome podcasts and useful links.

→ Back Guillaume Chau on Patreon to support his work and get a package of cat pics to your inbox every month :)