Zen and the art of nearshore agile development, notes after StartupCamp Berlin 2012

One of Monterail clients is Stefan Wolpers. On top of other dozen exciting things, Stefan organizes StartUp Camp Berlin. We have been lucky enough to be invited by him to the event. So Bartosz and I spent the last weekend in a vibrant atmosphere of Berlin-Kreuzberg at Startup Camp Berlin 2012. Vibrant has actually kept on being the main theme throughout the whole event.

First of all, Berlin is a 3 hour drive from Wrocław. A very pleasant one in mid-March. The proximity is not a surprising fact while lazily scrolling through the map. Not until one actually does hop into the car and after a while finds herself amazed by the atmosphere of the city and the event itself.

While it was interesting to hear different opinions (some from the very insiders) on German cloning scene throughout the day, we somehow managed to effectively enjoy the main party in the evening the most. Yeah, like we didn't know from the beginning.

However I have to give it to them: if a German party is scheduled to finish at 11pm – it will. No drinking until early dawn and partying hard just for the sake of it. That's correct. But believe me, you cannot not have a good time. 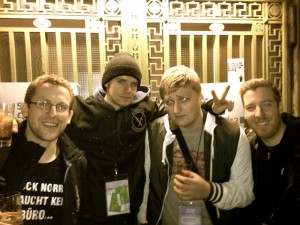 We were slowly seeing this coming. And when finally everyone was merrily hugging each other to say goodbye it struck me this is how it’s supposed to be. We found ourselves in beds just after midnight and sang a merry song of thankfulness and gratitude. Being fresh in the morning made me become a believer.

For us as an agency co-founders the most interesting issue that was brought up couple times was outsourcing the development of the product or a part of it. As a matter of fact Monterail has helped startups in US and Europe and has had an ongoing long-term relationship with all of them ever since. It shouldn't be a surprise that we publicly disagreed with one of the speakers during his presentation when he shared his view to actually avoid agencies when building a product. It was a great talk by Steffen Wicker from simfy: “How to build an organization that scales”. We were looking forward to this one and really enjoyed it.

I think Steffen and his startup are doing great job and all the lessons he shared with the audience were the bare bones and substantial knowledge that is rare to come across. That's why it makes perfect sense to assume that they have good reasons to believe that hiring agencies doesn't work. At least has not worked for them. As far as I understood the biggest problem they have been having is that agencies just do the required job by selling the necessary man-hours and focusing on project completion. Whereas an in-house team tends to be more caring about the quality of the work and is generally more passionate about it which leads to general comfort of the management team. I guess there is more to it like motivating your employees and other factors that vary across different organizations, including their sizes (speaking of scaling). On the other side when it comes to hiring outside agencies there are a lot of moving parts as well.

There is no Holy Grail when pursuing any of these approaches (in-house vs contracting). However for all I know there are couple things to keep in mind when contracting the stuff out and it may very well work out better than anything.

Later that day I myself had a presentation with Stefan on nearshore agile development and what we have learned so far about working together in this model. Stefan and Monterail have been collaborating on an exciting project “ebookMakr” that is scheduled to be released in a month. 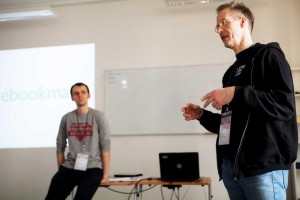 Szymon and Stefan during presentation (Picture by Adrian Rheinländer

As a nearshore/offshore agency Monterail has worked for various types of clients in slightly different models. However over time one begins to notice how processes and philosophies emerge in a general fashion. The more mature we become the more mature are our relationships. This was the case with Stefan where both sides immediately jumped right into their roles and set clear expectations.

During the talk among practicalities these were the main points that I was trying to convey:

For those interested in the presentation itself you can view the slides here: