Angular vs React—Which One To Choose For Your Web App?

JavaScript developers will agree that the right framework saves weeks of production time. The plan — write less code and ship a functional frontend faster. You are here to discover the practical difference between Angular and React to pick one that fits your project, has a strong community backing, and speeds up app deployment. Sit back, as this guide will help you make a confident decision.

As your CTO could say, it’s not only about the framework’s popularity but about what you can do with it. Read on to find out what you should know before committing to one.

Angular is a JavaScript (JS) frontend framework using the TypeScript language that was released by Google in 2010. Miško Hevery and Adam Abrons first developed it as a JavaScript-based AngularJS to help programmers build dynamic content web applications with HTML templates.

The 10.1.3 version of Angular from September 2020 presented a rewrite of that original framework. It works up to 5-10 times faster than v1 under an improved algorithm for two-way data binding and the addition of component-based architecture.

Developers use Angular to build large-scale web applications such as e-commerce, booking platforms or Progressive Web Apps (PWAs) that make a website perform like a smartphone app. It remains one of the top JavaScript frameworks because of its backing from Google and its coding power.

What is Angular Used For

Google AdWords, their Marketing Platform, and the G Suite pages use AngularJS while the newer Angular is behind Gmail, Google Cloud Source Repositories, or Google Shopping. Five notable Angular applications include:

Discover other projects made with Angular

In 2011, Facebook’s software engineer Jordan Walke created the React library for frontend UI works. Yes, it’s a library, but it’s often called a framework as expansion packages make it function as one. In contrast to Angular, React (or React.js) relies on JavaScript and works under a unidirectional data exchange model that uses components rather than templates.

What is React Used For

The library has been Facebook’s go-to UI solution for years. Their developers relied on React components in the latest redesign of the website to deliver performance-optimized front, messenger chat, and Ad Manager components. WhatsApp’s and Instagram’s browser versions are also based on React.

Discover other projects made with React

Similarities Between Angular and React

The 2022 Stack Overflow Developer Survey listened to over 58,000 developers which placed Angular and React in the top 5 most-wanted frameworks for web development. Why? Consider what both powerhouses offer. 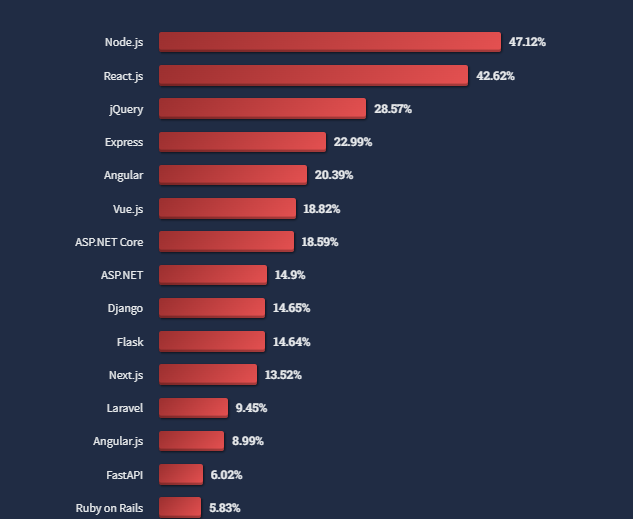 Rendering — Client-side and Server-side rendering is available, so loading-time optimization is possible regardless of the app’s complexity

Open-source MIT license — both frameworks are free to use, change, and re-sell for personal and commercial use

Community — a considerable following keeps them functional: there are 157 thousand starred React projects on GitHub compared to Angular's 66 thousand stars.

Differences Between Angular and React

The most significant divide is between what you get in the base package.

Google engineered React as a minimal UI development tool on purpose. It won’t send you push notifications or fetch data for you. But it can. Devs expanded the library with necessary framework components for faster app prototyping because of React’s successful adoption.

Angular’s creators packed it for a punch with the essential components that any competitive web app needs. Sounds good? Well, that creative freedom is overwhelming for inexperienced devs.

Since Angular works with HTML templates, developers must master new “Ng” framework directives and the TypeScript syntax. As a JavaScript superset, TypeScript expands its features with prototyping and the option to define global variables.

You can use TypeScript in React as some developers suggest, but React only requires you to know JavaScript that you combine with HTML/XML markup in the same file. The result is called JSX, which is a more readable syntax than raw JS. If you know JavaScript well, you’ll get running with React faster.

They have relatively small core builds. Angular 2 with the RX package weights under 800KB where the React library with the React DOM component reaches around 100KB. A smaller bundle offers greater speed. Since there are many optimizations you can use, both should be of comparable speed when used for small to mid-sized applications.

Angular might have a longer rendering time when dealing with hundreds of requests. This is because it’s based on a real DOM (Document Object Model) which by design updates each HTML object in the structure. React only targets virtual DOM elements that need change without re-rendering the component tree.

As you’ll see in a minute, React and Angular empower high-traffic web apps used by big brands equally. Considering the developer community's rich interest in them and a rising number of downloads, you can sleep easy. Facebook and Google will maintain them for years to come.

Downloads for React and Angular since 2017 Source: npm trends, July 2022

In this comparison, the pros point out that React needs much more strategizing as the minimalistic library relies on third-party React components. That doesn’t make it less powerful. You’ll just need to invest precious time into component management.

Since Angular was built as a full framework, it comes pre-packed with features such as the HttpClientModule or the RouterModule you’ll find necessary to expand your web app.

Angular vs React: The Popularity of Use

Programming is for collaborators. The more people are engaged with technology, the more support, tutorials, and answers you can expect. You already know that React outranks Angular in the number of starred projects on GitHub.

Let's verify other sources. Stack Overflow — one of the most vibrant programming communities — now registers more questions regarding React than Angular. Note that most Stack Overflow users ask for specific code advice when they’re stuck, so you can consider the graph below as a representation of project involvement. 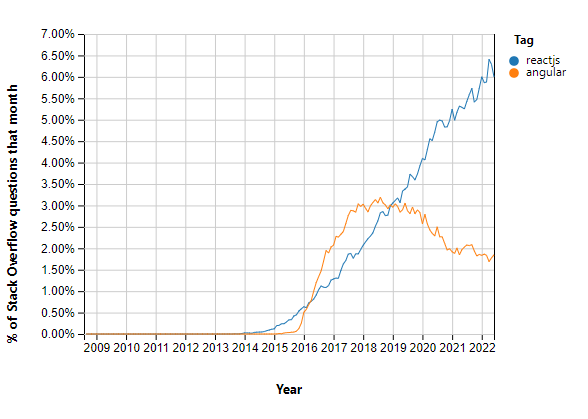 Metrics on the graph count the number of questions tagged with “ReactJS” or “Angular”. Source: Stack Overflow Trends, July 2022

React vs Angular - Which One Should You Pick?

You should make your choice with three factors in mind: time to adapt; deployment speed; and employer/client business requirements.

BuiltWith statistics show professional developers often chose the React library, as it’s used for over 15 million websites. Since it’s based on JavaScript with HTML, it’s faster to set up. React’s component-based structure eliminates update errors as the Virtual DOM renders partial changes to the code. Because each component has its embedded logic, developers save time by reusing them throughout the app.

Developers rank Angular as their second framework bet, which is reflected by the 300,000 websites that are using it. While there’s a wide appreciation for its pre-build functionality, the tool’s complexity makes it harder to implement. Angular’s rules force disciplined programming so that the code produced in TypeScript can be scaled-up with no confusion. Once you become adept, you’ll find that Angular is a collaborative framework with many command-line hacks for deployment, optimization, and maintenance of your web platform.

Which Type of Developer Are You?

Choosing one of the two frameworks depends on your proficiency in programming. React gives you the flexibility to work with JavaScript from the grounds-up by deciding to implement only the components that you need for your UI. If you're a more experienced developer who appreciates having all options on the table, Angular's wide range of functions should cover your project requirements. As hundreds of projects on GitHub show, you can create a scalable front-end with both.

Whether you choose React or Angular, we wish you the best of luck with your next project. Share in the comments what you are looking to build.

What Does a Principal Engineer do? My Monterail Way.
Written by  Anna Pomichowska

React vs React Native–Which One To Choose and When?
Written by  Oskar Mieczkowski