In the Golang series on our blog - so far - we’ve focused on the introduction to this underrated programming language. This time, I’ll analyze the differences between one of the valued technologies, Python, and its lesser-known - yet powerful - counterpart, Go.

Go (or Golang) was developed by Google employees - Robert Griesemer, Rob Pike, and Ken Thompson - in 2007 as a result of their growing frustration with other backend development languages used by the company, especially C++.

Their main objective was to build a way to write code optimized for performance and usability. In the era of large databases and multicore machines, the co-creators wanted the language to be efficient, first and foremost. That’s why Go’s syntax is clean and uncomplicated, and the language was quickly adopted by Google and other companies.

Read more about Golang’s origins and evolution, check our introduction to this language on our blog:

Golang 101: All the Basics You Need to Know

On the other hand, Python was created with the primary goal of creating a readable, high-level programming language that could be used for multiple purposes. From the start, the code base is also set up in a way that makes it easy to share with others. The main reason behind these in-built features of Python is Guido Van Rossum’s involvement with the Corporation for National Research Initiatives and its Computer Programming for Everybody (CP4E) program at the time. The scheme was developed in 1991 to help people learn to program and gain coding literacy similar to English or mathematics basic skills. That’s why Python had to be easy to learn and appeal to non-developers.

For more information about Python and why is it popular, visit our blog:

What Is Python and Why Is It so Popular?

When it comes to comparing these two programming languages, it’s important to remember that both of the technologies were created with specific, very different goals in mind and that the communities surrounding them are also focused on incomparable and distinct undertakings.

While Python is widely used in data science, including machine learning, Go is ideal for server-side commands and running software. The very apparent advantage of Python is how easy to share and read the code base is, so it has a large developer community. Golang has not been the most popular technology so far, but it has a steady following from DevOps experts and the like as it’s one of the fastest languages out there.

Here’s a quick summary of how Go compares to Python - and vice versa: 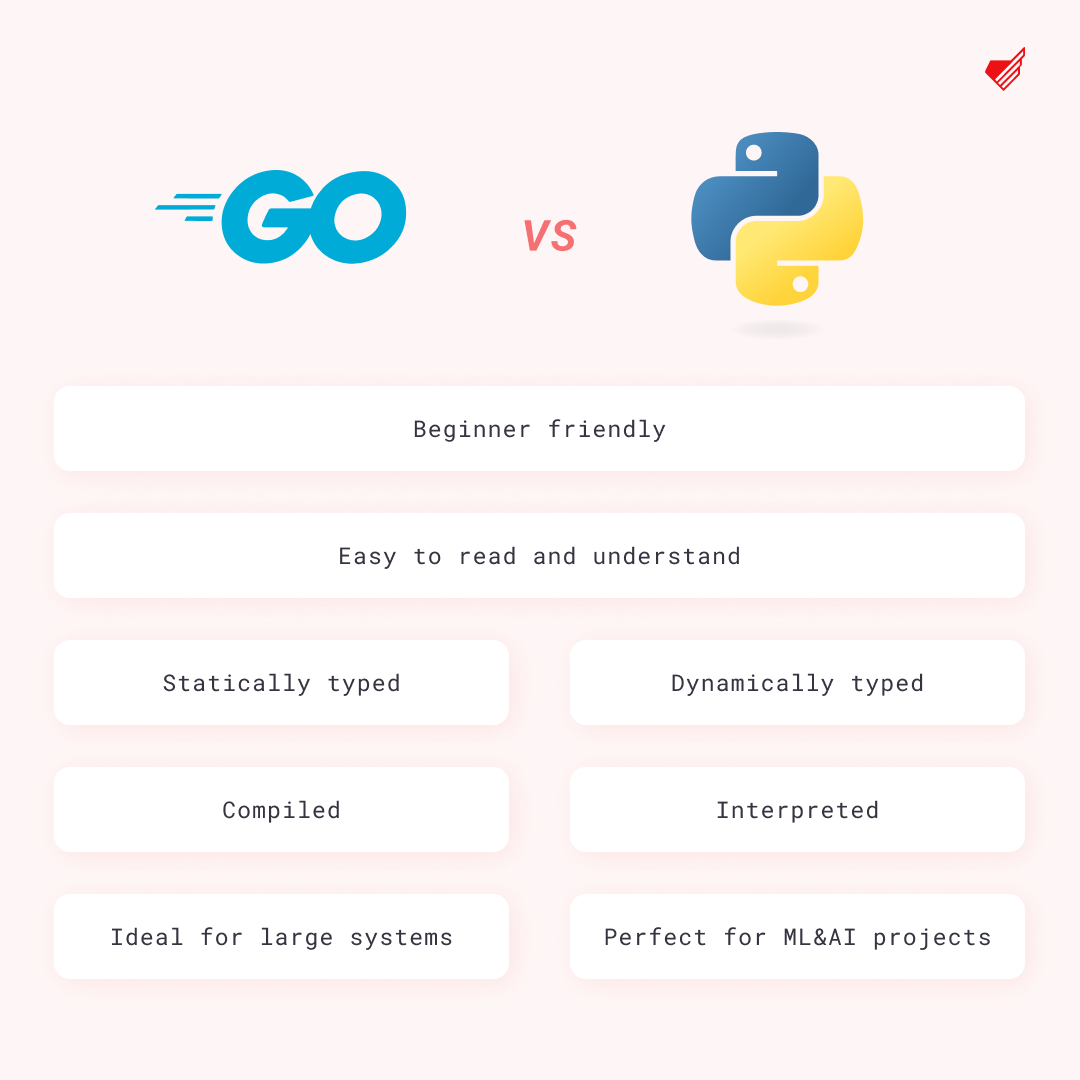 Go vs. Python - a Detailed Comparison

Now, we have this quick overview out of the way, let’s dive a bit deeper and compare how Python and Go compare the crucial aspects that will help you weigh in on which technology to use for your project.

When it comes to how popular each of these languages is among developers, I have to recognize Python’s dominance. In the annual Stack Overflow Developer Survey, Python is the 4th most widely-used technology, with Go ranking far below, in 13th place.

Python also trumps Golang when it comes to the number of times it was googled by global audiences in the last 5 years:

What does this popularity of Python mean for your project? It may be easier to find Python pros if you’re looking to recruit a team, but of course, it shouldn’t keep you from searching for experienced Go developers - if you need to hire them as soon as possible, check our Go development services and how we work with this technology:

As I’ve mentioned above, the focus when Python was still in the works was ensuring the readability of the final technology. It was designed to be understandable by beginner developers and even non-programmers. While Python’s syntax may be dense and change slightly with each version, it has a huge advantage: it uses a lot of words in English which means that the code is easier to read. Once you’ve grasped the basics of this programming language, you can follow and comprehend it even if you need to dive into a new project or check your work after a while.

On the other end of the spectrum is Go’s syntax with its minimalistic density and almost no changes over the years - which can be seen as both advantage and disadvantage - and one standard code format. This means that even older applications written in Golang will still work and their codebase will be easy to read for a person who’s familiar with the basics and the more advanced aspects of Go's syntax. This operational continuity is guaranteed by Go 1 as stated in “Go 1 and the Future of Go Programs”:

It is intended that programs written to the Go 1 specification will continue to compile and run correctly, unchanged, over the lifetime of that specification. At some indefinite point, a Go 2 specification may arise, but until that time, Go programs that work today should continue to work even as future "point" releases of Go 1 arise (Go 1.1, Go 1.2, etc.).

Go also provides tools such as gofmt and gofix to easily update source code in case something’s changed in the language and/or an old feature is deprecated.

Let’s check how Python and Golang compare when it comes to concurrency - the ability for different units of a program to run at the same time and independently of each other. On the dot, Go has a significant favorable asset there: in-built concurrency in the form of goroutines and channels, which simplify the creation of concurrent code and help avoid common mistakes such as race conditions and memory inconsistency.

Python doesn’t have this feature included, but you can achieve it through multithreading. Here’s a handy tutorial on how to do it from our Python Developer, Michał Stachura:

Multiprocessing vs Multithreading in Python – Explained With Cooking

When it comes to speed and overall performance, Go is unbeatable. According to the tests run by Sebastian Karasiewicz, a Fullstack Developer at SoftKraft, Golang trumps Python when it comes to handling more and less advanced tasks, including ‘Read from file’,  HTTP Request Handling, and binary search.

So, is Python just slower and you don’t actually have to choose between this language and Go?

The answer to this question is: it depends and it’s not easy to pick one technology over another. Your decision should be based primarily on the type of project and tasks that you work on. If your project involves machine learning, artificial intelligence, or developing web applications where quickly generating admin dashboards will be necessary, Python may be the way to go.

What To Choose For:

In the words of our Python Developer, Michał Żołądkiewicz:

If the project uses machine learning, more often than not, it will need to draw on some external libraries, such as SciKit and TensorFlow, both of which are available for Python. Because those libraries are written in C++, when using them in Python scripts, we’re using C++ in the background. That makes the development process fast because of Python, and makes our script as fast as those written in C++. The same is true for image preprocessing (OpenCV library).

Python will be ideal for any projects that involve managing large datasets or any ample and complex systems with multiple people making changes to them. Code written in Python is easy to read and understand, so even if your team members - or yourself - worked on a feature 6 - 12 months (or more) ago, you will grasp the gist of it in a matter of minutes rather than painstakingly trying to decipher how the code operates.

As I’ve mentioned above, Golang has been gaining recognition in the DevOps community and is now one of the most widely used technologies for DevOps projects. The idea of Go being used as a go-to programming language for reading, debugging, and maintaining large software systems was built into this technology right from the start, according to one of its co-creators, Rob Pike.

In addition to that, multiple popular technologies were written in Go, including Docker, Prometheus, Terraform, etc. They’re so-called  "system projects", low-level applications that work more closely with operating systems (files, networking) than with users. Such software was mainly developed in C/C++ but Golang is easier to write and maintain to achieve the same results.

The fact that Go is statically linked, compiles directly into machine code, is platform-independent, and is highly performant make it a perfect choice for DevOps professionals.

Golang vs Python for DevOps: Go is a platform-independent language. Create those binary execution files for Windows, Linux and macOS easily, Python is not seemingly as easy to be able to do this.

Plus, one of the most commonly used DevOps platforms - Kubernetes - was written in Go as it was developed and is still maintained by Google.

Once again, you should consider using Go for your backend development projects.

Why, you may ask?

The first reason is its scalability and adaptability when your application grows rapidly - Golang was built at and for Google after all.

The second reason is Go’s flexibility when it comes to deliverability. If you need to test out your business idea quickly - building a Minimum Viable Product using Go is much more efficient than with Python.

Another aspect that adds to Go's prevalence over Python for backend development is concurrency I’ve mentioned earlier in this article. For this programming language, you can easily achieve it with Goroutines - lightweight methods/functions that can run concurrently with other functions.

As you can see, while Python is still a true giant of the programming world, Golang is becoming more popular, especially in the domain where speed is crucial.

If you have any questions about how we work with Go or a project that you’d like to discuss, head over to our Go development services page: