London is home to thousands of leading EU start-ups and it seems that its reign as the destination for business is far from over. Last year, a total of 10,016 software development and programming businesses were incorporated in the UK, compared with just 6,300 the year before. Despite plenty of business accelerators, easy access to financing, and even more business ideas lined up for implementation, one problem still persists in London.

Given the current economic climate and the prospect of the United Kingdom’s impending exit from the European Union, this shortage is likely to become even more aggravated in the near future. A number of expats formerly employed in the UK have already started leaving the country, creating an even bigger gap in the market. Predictions indicate that satisfying the growing demands of the UK economy will require introducing an additional 100,000 science and engineering professionals by 2020. The market will become more competitive and drive companies to fight for employees. Some of them might ultimately find themselves too short-staffed to operate smoothly and grow their business.

That’s why there are very few software houses based wholly in London. Most firms are either small family businesses unable to take on bigger projects or corporations with a salesperson in London and the rest of the dev team scattered around the globe. Only a few short years ago, this scattering usually meant dealing with typical offshoring locations, like India, China, and the Philippines. But long-distance relationships are hard—you’re separated by half the globe, a half dozen time zones, and considerable cultural differences. There’s a chance that you will score the most qualified in-house developers in London for your project, but then you’ll have to deal with adequate compensation, and according to Glassdoor, the average base pay for a senior programmer in the UK is around £60k a year.

As a company owner, CTO or a corporate IT project manager based in London, you have a handful of options for dealing with that particular situation, but most are usually expensive or ineffective.

Viable alternatives include what the industry calls nearshoring. As the name would suggest, the process involves outsourcing to some external company, but to a country closer to your home base—both in terms of geography and all the soft stuff, like similar mindset. It’s a good option to go with when you don’t want to commit to creating a large and costly team that you won’t be needing in the future.

Nearshoring has been on the rise for quite some time now, with Romania, Czech Republic, and Ukraine emerging as leading destinations. Given little to no time zone difference, similar culture (and business mindset), and a diverse and fast transport infrastructure in place, the shift towards Eastern European locations should not come to anyone as a shock.

All the above apply to Poland, too. Actually, Poland has recently become the leading software development hub for the United Kingdom, Switzerland and the United States. A vast talent pool combined with middle-shelf prices make the country a top outsourcing destination.

Unless you want to spend loads of money, travel to the most distant corners of the world, you kinda have no other choice.

In this post, I will be outlining the benefits of nearshoring for London-based companies, explaining why Poland leads nearshoring destination rankings, and suggesting how to choose the right outsourcing partner near to you.

What Outsourcing to Poland Gets You (Besides Your App)

According to AT Kearney, Poland is the most attractive market for outsourcing in Europe. 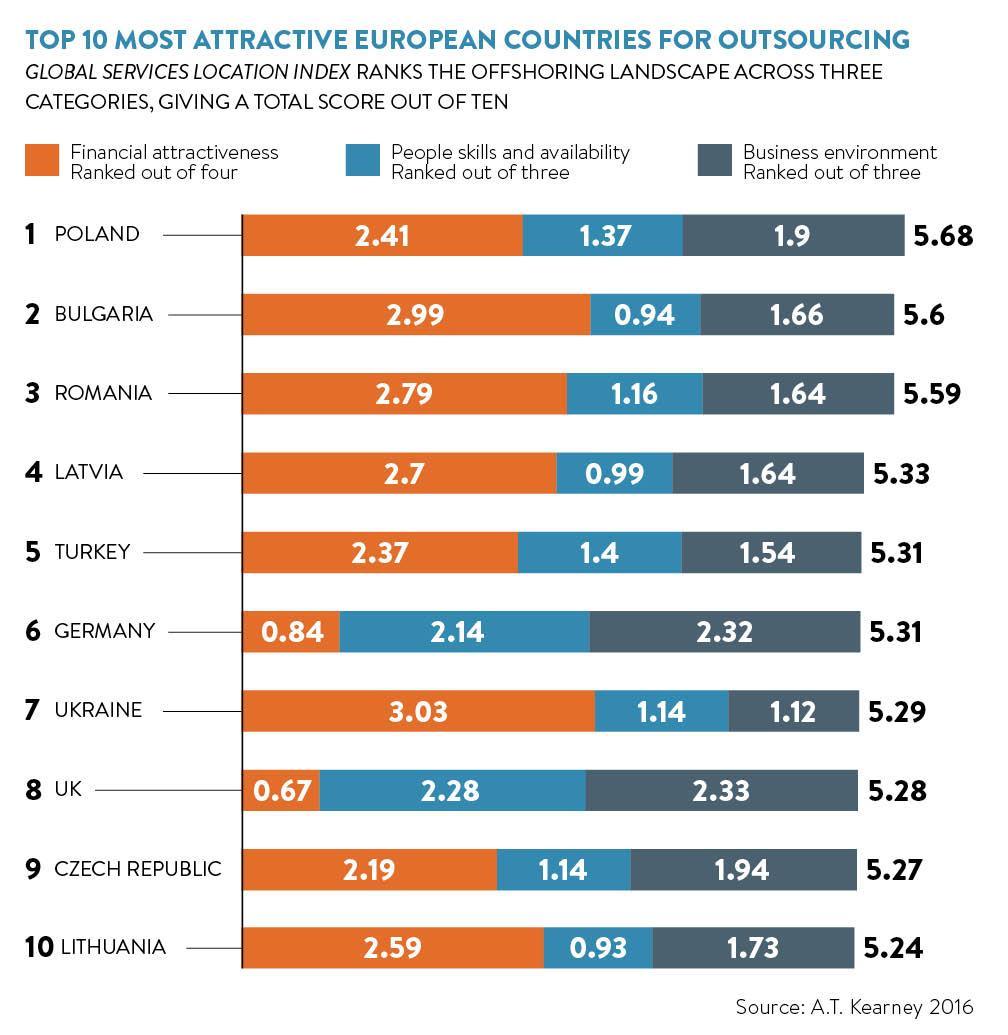 What makes the country number one and why should you consider moving your software development there? Let’s have a closer look.

The fact that the labor cost gap between Europe and the Far East continues to close, making nearshoring a viable alternative to offshoring, is probably the most obvious reason for the country’s recent rise in attractiveness rankings. Nearshoring reduces your overhead, both in terms of travel costs as well as the price of keeping an in-house team on standby—you pay just for the volume of work, not for eight-hour-long developer workdays. Besides, it's more than just hourly rates—with nearshoring, you don’t have to deal with social benefits, payroll taxes, administrative costs, and additional office space.

To give you a better picture of a nearshoring price ranges and possibilities—on average, Ukrainian developers charge £19/h, while Poland represents middle-shelf pricing, with average rates around £38/h. The rates in Prague and Zurich, on the other hand, tend to match New York’s, averaging around £108/h, making the idea of nearshoring in the Czech Republic somewhat absurd.

Although for most companies the decision to nearshore will be driven primarily by costs, remember to look beyond money and pick an IT partner with reasonable and competitive rates for their region. Just remember that the lowest ones might cost you with questionable quality or a shortage of particular technology experts.

A pool of highly skilled workers

Poland's tech workforce is booming, its developer population especially. Currently, the size of the IT talent pool is estimated to exceed 250,000 people, nearly double the 2017 numbers for Romania and the Czech Republic. There are twenty-five master’s degree programs in computer science and IT carried by six universities, all of which are included in the QS World University Rankings 2016-2017.

Almost 75,000 students, around 6% of the whole student population, graduated from information technology programs in 2016. Besides, Poland has become an attractive destination for foreign students. According to The Study.EU Country Ranking 2018 for International Students:

Polish universities have consistently increased the availability of English-taught study options (...) the number of foreign students in Poland has exploded from just 12,000 to over 65,000 in the past ten years.

Poland was ranked #3 in the worldwide programming skills assessment by HackerRank, falling only behind Russia and China. Poland’s wealth of tech talent has also led some of the world’s biggest tech companies, including Microsoft, Google, Nokia, ATOS, Ericsson, Oracle, Comarch, to build resource centers there. And given the extensive presence of these and other major brands, Polish developers have extensive experience in working with global technology companies.

With Wrocław only a 90-minute flight away, a trip would take only slightly longer than the average Londoner’s commute. The convenient location of Poland’s development hubs gives you the opportunity to cut costs and time spent in transit.

Ticket prices for London-Warsaw flights start at £15, London-Wrocław flights start as low as £10 for a one-way ticket, while the cheapest flight to India requires laying out around £300, at minimum. So it's definitely within our clients' reach to take part in the Discovery Phase workshops on site in Wrocław and within ours to fly out to meet them in London, both of which yield considerable benefits for both parties—it lets the client see people behind the code, build relations, and get a feel for what the cooperation vibe is like.

Ultimately, such an approach saves time and makes the decision easier. In the case of Monterail, more than 90% of our potential clients who visit our office decide to work with us. This number is much lower for clients who decide against visiting. You can probably imagine how visiting your future vendor may influence your overall perception of their work.

And since we’re talking location, Wrocław is often chosen not only as a nearshoring destination but often as a meeting point for teams spread across the globe. That was the case with the Vue.js team, who visited our office in June.

Sitting almost in the same time zone ensures that a service provider based in Poland is working the same business hours and can be treated as an extension of a UK-based organization. It’s much easier to schedule communications, calls, or even on-site meetings.

A six-hour time difference basically sentences you to brief one-or-two-hour-long time windows when you can hope to catch your team for a call or a Slack conversation in real time. Plus, if your app breaks in the afternoon, you’ll have a much lesser chance of reaching your developers and working fast to find a fix. So, a common time zone also matters to your users, who expect your app to have all the bugs fixed as soon as possible.

The Poles start learning English at 5-6 years old, sometimes even in kindergarten, and grow up surrounded by English-speaking computer games, TV shows, and online sources.

Employees in the IT sector have a good grasp of English, as it’s more or less a requirement in the industry, and many companies employ English as their official language. Even meetups and dev gatherings in Wrocław, such as meet.js held at the Monterail office, for example, are conducted in English. Language is not a barrier anymore. Like many other companies operating on foreign markets, Monterail assesses the English skills of every candidate during their job interview. And we only hire people who demonstrate considerable fluency, just like most software companies in Poland.

Poles and Brits are quite close culturally which, in turn, helps create a more integrated team that will demonstrate a similar approach to handling problems and duties. Poles exhibit similar communication patterns, have a strong sense of duty, and are deadline-driven. When working on a longer project, it is much better to have a few clear deadlines rather than just one at the end. Besides, both countries are rather used to dealing with each other, so they have an understanding of how certain aspects of their businesses work and how to smoothen any potential snags in a collaboration. Both also see the quality and meaningfulness of the end product as the ultimate goal which leads us to the final point.

According to a graph making the rounds on the Internet, Polish people strive for perfection and are generally self-critical. The British Council guide on cultural differences seems to confirm the image, stating:

Such an approach allows for a quicker reaction to problems, encourages the acknowledgment of potential shortcomings, and supports the adoption of agile methodologies. Ultimately, it’s more than likely that choosing a Polish team will get you a highly polished product.

Whether onshoring, nearshoring, or a mix of both is the best option for your company depends primarily on your priorities. If lower costs are your biggest concern, nearshoring will offer you the best returns.

In the end, it seems highly probable that London-based companies will have to reach out to external resources for help. Collaboration between UK businesses and their European partners will likely expand manifold, not only in terms of the software development, but also financial, accounting, and other services. The good part, however, is that this particular trend is positioned to bring considerable benefits to both parties.

Hop on the IT outsourcing train

London doesn’t have to be a pricey place to build great software. Outsource your project to Monterail and get a better product quality for even 50% less than you would spend hiring in London. Want to make a reality check?