A lightweight application for the African healthcare market

What did we do for Merck? 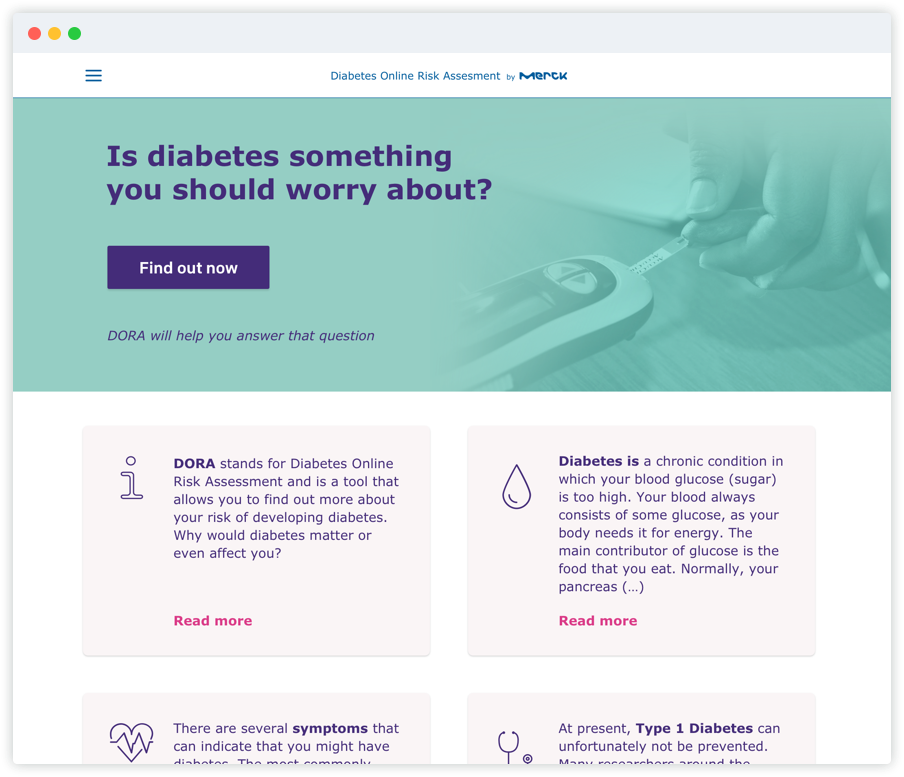 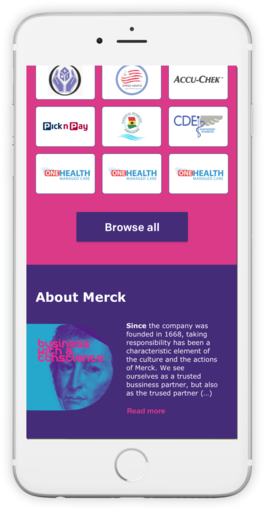 Check on how we can make your project awesome

One of the core missions of Merck DORA is helping fight diabetes in African countries. In pursuit of that mission, they approached us to overhaul their existing Web-based application, which promotes global health and helps identify diabetes-related problems. As we believe that access to quality healthcare is a fundamental human right, we were incredibly excited to be a part of such a project!

The challenge was to take the app over and... make it work. The client was dissatisfied with the app's then-look and feel and we were tasked with refreshing its design. Moreover, work in the app required extensive research of the target market and that's difficult to do from abroad. There were some things, however, that we were aware of from the start, including that Internet connection speeds are extremely low in many areas of the continent, so were acutely conscious of the fact that we needed a lightweight but still visually appealing application. The challenge before us entailed:

We had some familiarity with the overall African healthcare market due to our earlier work on Merck Unite, however, Unite was focused primarily on healthcare specialists, whereas DORA was aimed at a much broader audience - so that's where we had to start our research. In the course of our research, we've learned that over 90% of DORA visitors use mobile devices, with 60% specifically using Opera Mini because it helps reduce data plan consumption by compressing data and bypassing JavaScript scripts. Moreover, the research showed that DORA visitors used a range of device which, in turn, translated into plethora of resolutions we had to keep in mind - from 720x1280 all the way down to 360x640, which meant that we had to make the app work on some very old mobile devices as well. That was new! We decided to implement a separate version for the Opera Mini browser, and use Vue.js to optimize frontend performance.

Given the limited budget, we had to stay flexible at all times. To achieve that, we use Kanban in our everyday work - keeping us in constant conversation with the client. As we support Merck in their pursuit of their mission, we often help them optimize spending where possible, mostly by cutting down on the number of meetings and advising them on product management and their business plan. This is how we make it happen.

We've been Merck's partner in their ambitious mission of bringing greater health awareness to African countries for nearly 3 years now. Projects like these remind us that our work can actually influence the world and make it a better place. It was a pleasure to work with them!

When we started our efforts, Merck DORA was only available in Kenya. Currently, the application is available in eight more African countries in different language variants. We delivered a redesigned, reworked, and optimized version of the app - the new version weights only 0.7 MB, closely follows the company's corporate identity, and has helped Merck secure new business partners - pharmacies in Africa - the company currently collaborates with 279 of them.

Our involvement with the DORA app resulted in further collaboration with Merck on three projects: Merck Unite, Merck Life Science and the Fertility Online Risk Assessment. We are convinced that our work on these projects will contribute to better access to high quality healthcare. Our success hinged on three key factors: I was impressed by Monterail's services. Not only did they bring their technical expertise to the table, but they showed their sensitivity to the particular cultural context of this project by asking a lot of meaningful questions early on.

Get a fast response

We'd love to hear about your project

Click "Send us a message" to consent to processing your data by Monterail Sp. z o.o. for marketing purposes, including sending emails. For details see our Privacy Policy.