Last year, when Monterail decided to change their office to be a bigger and better-designed place , they decided that it should also be smarter. I was introduced to the team as a person who could make this happen. I collaborated with Monterail during the renovation of their new home and then finally joined the team.

Such a huge project cannot start without a good, long workshop about our needs and requirements. After a thorough workshop we decided to have the following features:

After that, the automation system project was done and the whole office concept was ready to be implemented in real life. The entire hardware side of the smart office had taken place during the construction work done by the renovation crew. Of course, there were some small complications during whole venture, but everything ultimately ended up as we wanted.

Thinking of an IoT development?

Work with JavaScript experts who will push hard to understand your business and meet certain deadlines.

See what we can build together

Most automation systems we found were built based on PLCs – due to their reliability and strict manufacturing restrictions.

“Let’s do something new, something that we haven’t seen on the Internet before.”

After some consideration we put our bet on Raspberry Pi. We debated about reliability as we couldn’t find a project based on RaspberryPi that big. We wanted to find out if it’s possible. And we did.

Heart of the system

There is one master Raspberry Pi which controls all of the low-level hardware. To accomplish this we had to create two kinds of custom devices: 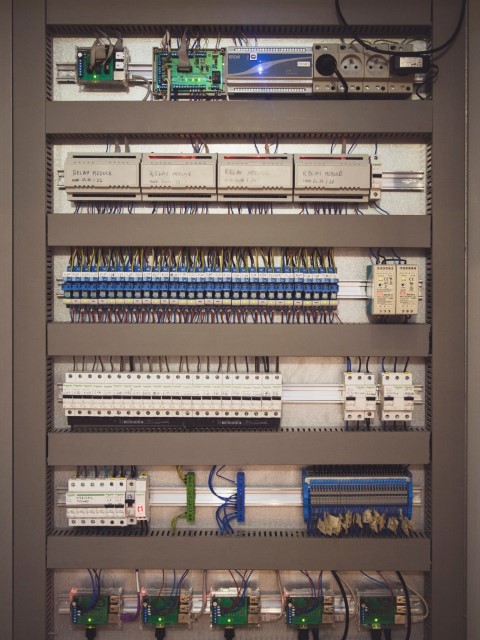 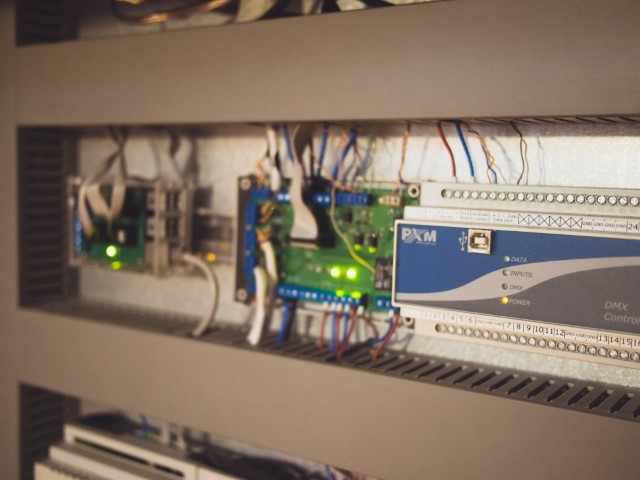 The main unit also runs a web server with a Web Application that allows to control all of the features.

This function is achieved by a regular movement sensor mounted in each room. Signals are gathered in the device described above.

There are five additional Raspberry Pis connected to separate TVs. They are all independent showing mostly funny memes or websites with meaningful information.

This was achieved by simply running Chrome in kiosk mode on each device. Chrome Debugging Protocol is used control it from the web (that is the main Raspberry Pi).

On some occasions (e.g. keynotes during events available to the public) we knew we needed an image from the projector to be shown on the TVs. Instead of rewiring the whole system, we made a simple hack: a bunch of HDMI switches and splitters connected together created the ability to change the TV source from Raspberry Pis. We can now use the Web Application to control if we display the projector on each TV independently. 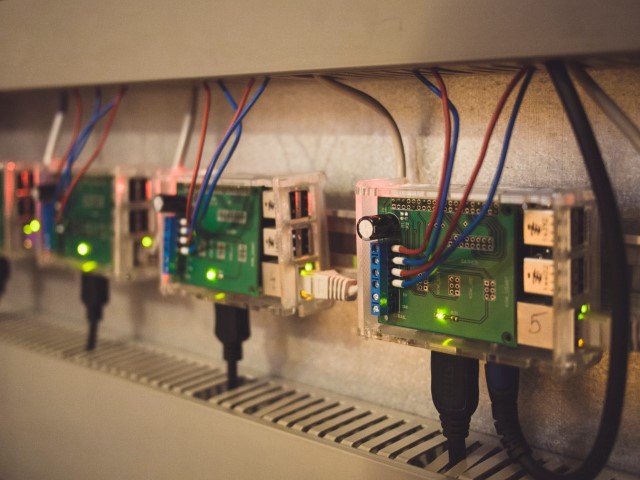 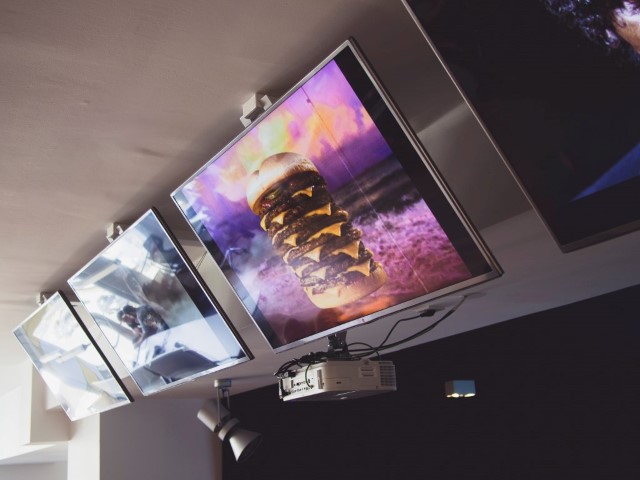 We ended up having high quality speakers all around the office mounted in the ceiling. The owner of the building gave us them for free as our office space used be shopping area before we took all the walls down.

We divided them in multiple sections and connected to a broadcasting amplifier. Two of the Raspberry Pis are connected to the amplifier and run DLNA and AirPlay servers. Thanks to this, everyone connected to our WiFi can stream music wirelessly to a specific audio section. It works great after-hours.

Additionally, we have external speakers with a separate RPi in the restroom. It has an Internet radio player installed and a simple API exposed which allows to control it with our smart office Web Application. A nice touch to walk into a restroom and hear radio playing. The choice of Internet radio played in restroom is meticulously managed by people on #music Slack channel. 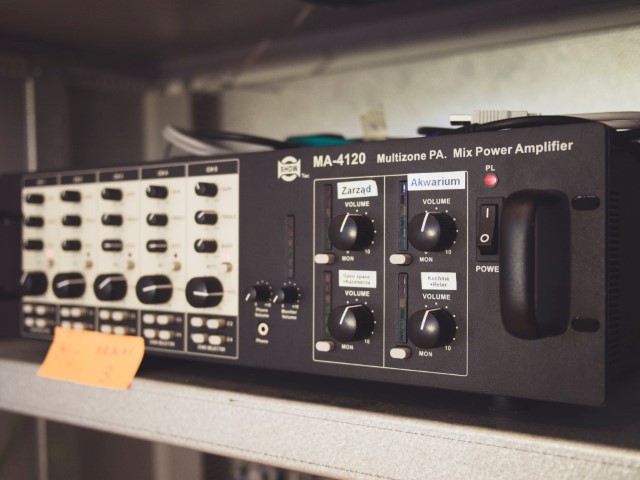 When someone joins Monterail it is required that they have a separate access card to office doors. Adding a new card by hand would be annoying, but since there is a possibility to connect a card reader to an external device…

We hooked it up with our main Raspberry Pi and set up a database with every employee matched with their card number and access code. This setup allows us to add new cards simply by inserting it into the database.

We have a custom-made RGB LED lamp in the kitchen formed in shape of the Monterail logo. It came with an IR remote to control it the colour palette.

Remote? We use Raspberry Pi to precisely control the colour it via our Web App, too. Connecting wires directly into an IR socket and emulating the remote with ready-to-go libraries was easier that you might think. 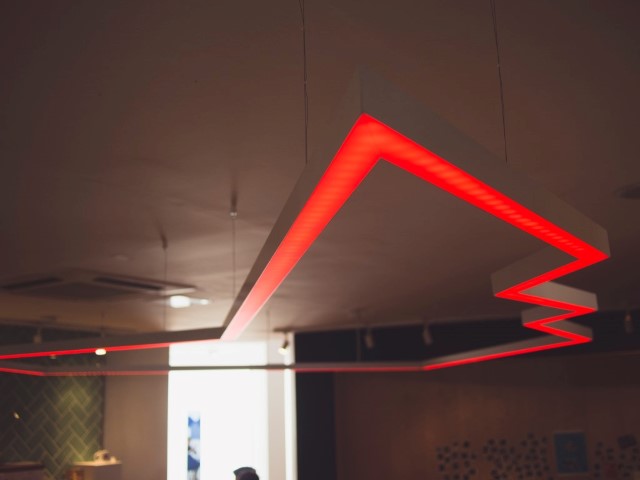 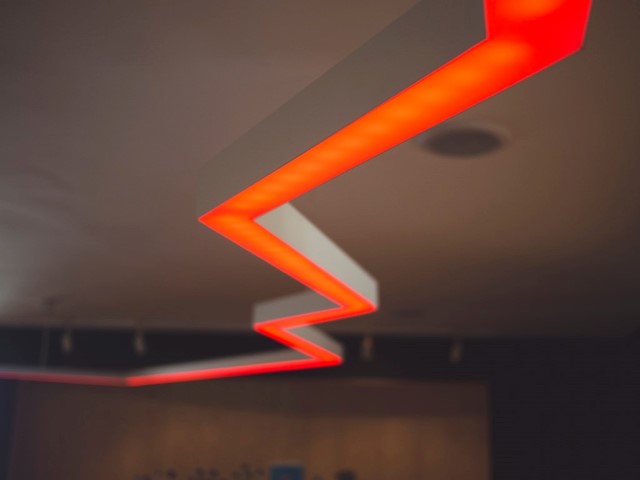 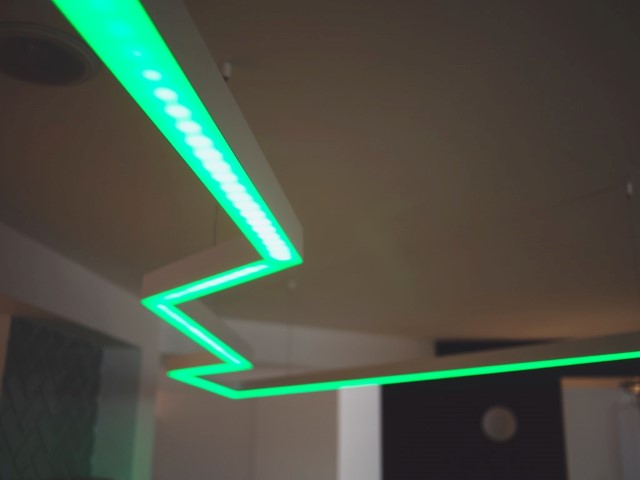 Controlling whole office from a computer or mobile phone is very handy, but what if we don’t have any of these devices with us? Lights can be controlled in an analog way, but we wanted to have the whole system within reach.

We came up with the idea of Android-driven tablets on the walls near strategic rooms. Each is running the same app that you’d find on the desktops. They can also display a room occupancy calendar so everyone can see the nearest availability of the room. 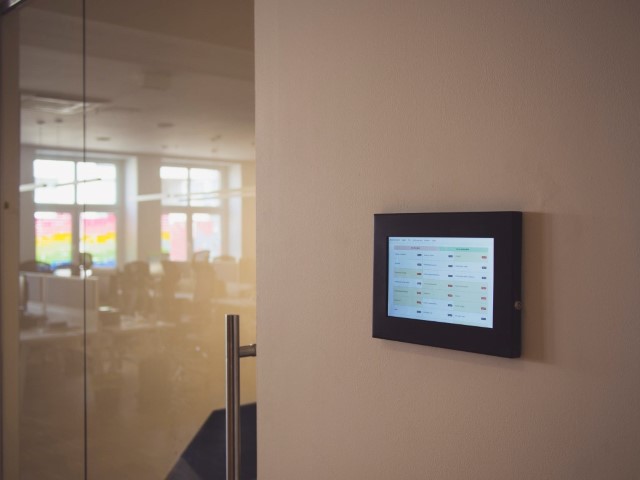 People would think that using Raspberry Pi in a system of that scale is crazy. They are too many things that may go wrong.

Now, after a year from launching our smart office system based on 7 Raspberry Pis we know there is nothing to be afraid of!

This system is, for sure, not ready to be mass-produced and implemented. Modules will need to be standardized and the RPi should be used in a “Computed Module” version. But it proves a point. An RPi can be used for much more complicated tasks than blinking LEDs or streaming video. It can manage your entire office!

Do you have similar experiences with Raspberry Pi or other systems? Or do you have bad ones? Feel free to ping me in the comments!

Many of you requested for some technicalities in the comments, so we present some details about our smart office system.

We have about 27 light zones in the whole office. Each zone is controlled independently by separate circuit. Cabling from every light set and every light switch is brought to the main automation cabinet.

Inside cabinet, every light zone is connected in a multiway switching configuration with Finder relay module. This configuration was chosen as a failsafe solution for the future as it is experimental, custom installation. I'm pretty convinced that it won't be used in near time.

For relays, it is required to have some IO expansion interface to handle them with required currents. As I couldn't find any appropriate module we created a custom one, specifically to our smart office. For addition we needed to have a feedback from the lamp, as it can be switched independently from the wall switch. To achieve that goal I used ISP814 AC optical isolator with some RC filter at the output transistor. The working principle of this configuration is pretty simple. In a normal state, when there is no voltage at optoisolator input, the output pin is in constant HIGH state. When you apply an input voltage the output transistor is conducting for a small amount of time in a 50Hz period as AC wave crosses the zero level. The RC values are selected to maintain around 0.1V level at the output, which implicates to be designated as LOW logic level.

The whole module is driven by popular MCP23017 which is handling both relay outputs and light detection inputs. The module is connected through I2C interface to the Raspberry Pi. We thought about industrial Modbus interface, but for the purpose of this installation, it was omitted.

We created raspberry pi conference rooms by placing movement sensors in each conference room. The sensors have simple, shorting outputs. They are connected through optoisolators to the Raspberry Pi input header.

It was a pretty nice hack as DMX driver delivered by the external contractor was without any network interface. It had an IR input terminals, though. The simplest solution was to directly connect the terminals to RPi, and emulate IR codes through lirc.

Main door RFID receiver is configured as read-only device and connected through Wiegand interface to Raspberry Pi. It reads all input codes and after validation enables the electromagnet in main doors through a relay.

Each screen is connected through an HDMI cable directly to RPi. Each RPi has auto-booting Chromium with debugger mode enabled, so it can receive external commands. Two of them also has audio servers installed and each one of them is connected to the main amplifier through the audio cable.

HDMI switching from the web is achieved by connecting a bunch of HDMI switches and splitters together. HDMI switches were custom modded to interface them to the main Raspberry Pi.

Basically, software is divided into 4 parts. 3 lower levels are written in python, the web application is written in Angular JS.

HAL interfaces all hardware and gives an access to it into higher logic code. Basically, it uses pigpio and some libraries for MCP23017.

Logic part is divided into classes, each one supervising particular part of the system (ex. relays). In each class, there is implemented a control interface along with collision detection system. Each class exists as a singleton in the main application. It was required to implement some protection for forbidden states of the system.

There are two kinds of APIs for controlling the system. REST API is used for user actions (ex. turning the lights on/off). It was built with Bottle Python framework. All callbacks (ex. light state change, movement sensor detection) is interfaced through WebSockets with geventwebsocket module.

I wrote a quick proof-of-concept app to make the whole system usable. Monterail is currently developing a new version of the office managing software with a team dedicated to it. 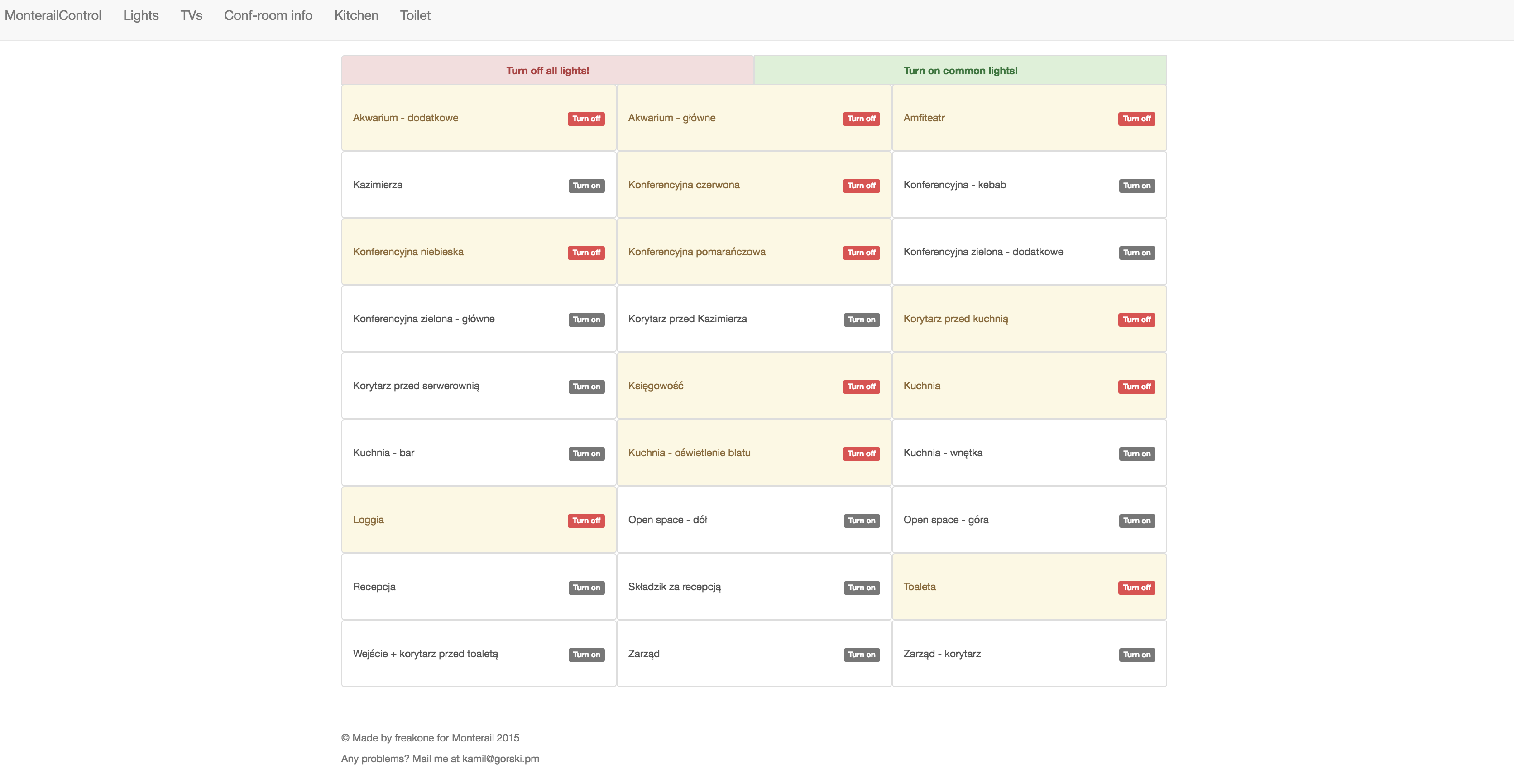 Could our smart office be smarter?

What do you think about our smart office system? What would you change? What could have been done better? Feel free to share your ideas in the comment section below.