Flutter vs React Native for Mobile Development—What to Choose in 2022?

Do you want to build a sleek mobile app quickly and efficiently? Then you've probably heard about two leading frameworks - Flutter and React Native. But what's the difference between them? Which one is better for building an MVP (Minimum Viable Product)?

In this post, I will be covering these questions (and more) to give you a better understanding of how your business can benefit from Flutter and React Native development and when to choose which framework.

Is Mobile App Development the Future?

If you're still wondering if a mobile app is a wise business direction, you can get rid of your doubts. Mobile is the future, now more than ever. The number of smartphone subscriptions worldwide surpasses six billion and is forecast to further grow by several hundred million in the next few years.

Number of smartphone subscriptions worldwide from 2016 to 2027 (Source: Statista)

This sweeping expansion has been driven primarily by the fact that smartphones have become much cheaper and faster, while mobile networks have spread to the point to allow us to remain connected to the Web almost constantly.

This trend, in turn, forced companies to better meet user expectations and create native versions of their products for major mobile platforms, making them fast and easy to use and thus ensuring they stay competitive in the market.

As mentioned before, when building mobile apps, there are a couple of technological options to choose from, particularly when you’re interested in having only a single codebase for your project. Flutter, a framework developed and supported by Google, is one of the technologies worth considering.

So what exactly is it? Well, according to their official site, Flutter is a software development kit...:

"for building beautiful, natively compiled applications for Mobile, web, and desktop from a single codebase”.

It is offered as an open-source technology and is available for developers and designers free of charge!

And what about the Flutter future? Since it's backed by a tech giant, we can comfortably say it will be supported for a long time.

What is React Native?

React Native, next to Flutter and PWA, was called a revolution in cross-platform app development delivering a great mobile experience.

It is an open-source JavaScript framework created by Facebook and typically used for developing cross-platform (iOS and Android) native mobile apps.

The Popularity of Flutter and React Native

When it comes to cross-platform mobile application development technology trends, both React Native and Flutter are pretty similar in terms of popularity, and both are still quite young (React Native was released in 2015, Flutter in 2017). Both technologies rank very high on GitHub with 144k stars (Flutter) and 104k (React Native).

We can see that the interest in Flutter has been rising since 2020 and is growing rapidly.

Interest in Flutter vs React Native in 2022. Source: Google Trends

Flutter is currently the most popular cross-platform mobile framework used by global developers, according to a 2021 developer survey. Based on the survey, 42 percent of software developers used Flutter while React Native is right behind it with a score of 38% in 2021, slightly less than a year before.

Mobile framework popularity from a survey of over 30,000 responses. Source: Statista

Differences Between Flutter and React Native

Back when I started working in mobile development, React Native offered a  smoother learning curve than Flutter, because it uses a JavaScript and React approach.

Flutter, on the other hand, uses Dart, an object-oriented programming language that supports static typing and sports a syntax that is quite different from JavaScript. But if you worked with Dart before, the Flutter learning curve will be much less steep.

Staying for a second longer in purely technical matters, installing and running either Flutter SDK or React Native is rather straightforward and the available documentation is on par with that of any other mature environment.

As for long-term support, both Flutter future and React future are in good hands, considering they are managed by big companies.

Below, I list five particular aspects of Flutter which make using it a pleasant, enjoyable experience:

Flutter supports both Android and iOS mobile platforms, and because it renders everything by itself, it lets you run everything off one codebase. It's a big time-saver!

2. Beautiful interfaces in no time

There are two sets of widgets available out of the box: Material Design, which is compatible with Google’s design guidelines, and Cupertino, compatible with Apple's Human Interface Guidelines for iOS.

Flutter manages every pixel of the screen, so we can be sure that our widgets will look the same on every mobile device (even the older ones), essentially removing our potential device support woes. This, in turn, allows us to create amazing-looking user interfaces that look exactly the same on both Android and iOS with a single codebase.

This is where Flutter truly shines: hot reload feature provides the ability to introduce changes on-the-fly, allowing you to see them immediately during development. This feature makes the app development process significantly faster!

As already mentioned, the Flutter SDK is a cross-platform tool, that allows us to develop for desktop, mobile, and the Web using a single codebase. It also enables you to create beautiful, expressive UIs with Flutter's widgets, layers, and interactive assets.

Is Flutter Good for MVP development?

In the development process, the MVP is an important step taken before the product becomes a full-fledged app. Such an approach offers a number of benefits:

2. It allows us to test business and product ideas and get rapid feedback from your user base.

3. It helps you to prioritize tasks and separate the essential features from the nice-to-haves.

Flutter helps save development time primarily due to its cross-platform support because it eliminates the need for using platform-specific codebases.

On top of that, the hot reload feature, which helps tremendously when it comes to adding new features or fixing bugs using the well-rounded debugging process, makes Flutter a highly performant tool.

These qualities make it a highly appealing mobile framework when considering the technology to choose for MVP or POC development.

1. It has limitations in terms of UI rendering on native platforms, e.g. video on Apple TV or Android TV.

2. Features that are newly added on native iOS and Android systems will naturally be introduced in Flutter later than on their native versions.

3. Although Flutter is easy to learn, you will probably need some experience with native app development to build a functional cross-platform app.

Using libraries such as React Native for Web or ReactXP allows a developer to build a cross-platform app that runs on the Web too, so there’s no need to build separate apps at all.

React Native is a fairly mature framework that also made a name for itself in the world of mobile development. What are its main benefits?

It is a mature framework with stable API, backed by Facebook. It is also used by many big players, including Walmart and Indian e-commerce giant Flipkart.

It is easy to learn for React and JavaScript developers. You can take advantage of existing React libraries, tools, UI frameworks and tutorials. The framework also has a robust, helpful community.

React Native allows you to add new code to a running app which decreases the risk of losing some functionalities during a whole reload or app rebuild.

The active community of developers working in React Native creates quality informational content, easily available online. Developers can join a Facebook group with over 47,000 members or read through over 6,900 questions tagged [react-native] on Stack Overflow. 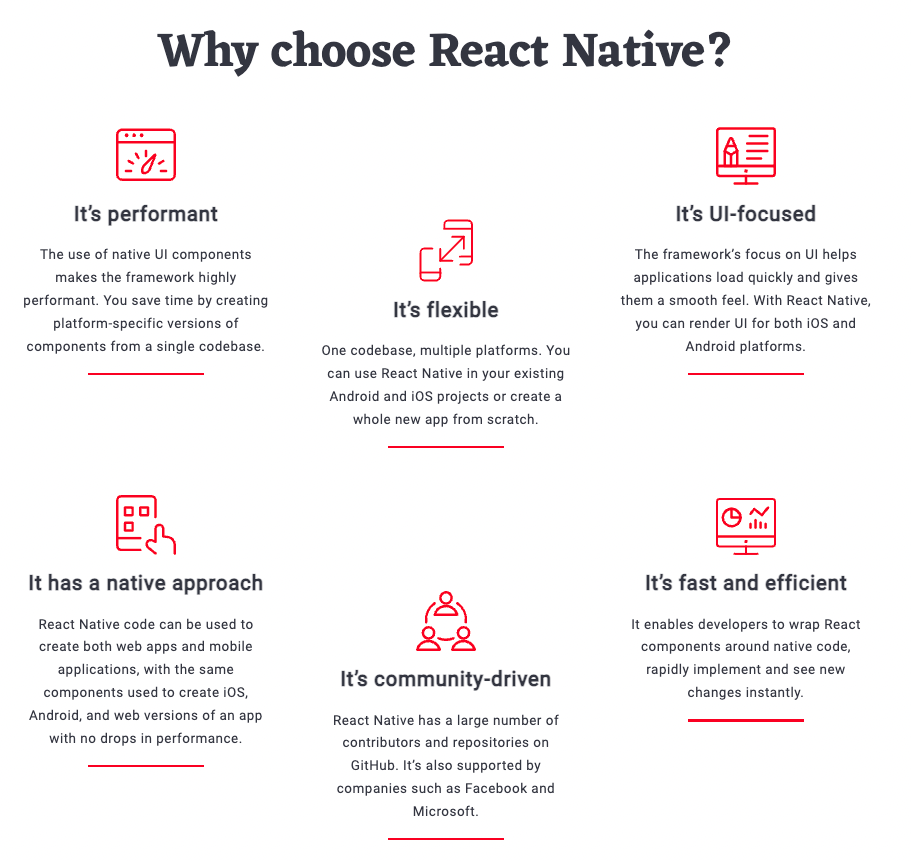 1. It still lacks some custom, platform-specific modules and you may need expertise from a native developer to create them.

2. The navigation is not as smooth and cross-platform development might cause performance and device-related app issues.

3. It's not the best choice for apps that include games or heavy animations.

See how choosing React Native for cross-platform development allowed us to build mobile apps sharing 99% of the code, and 80% of the code with the desktop version. Read the Guild case study. 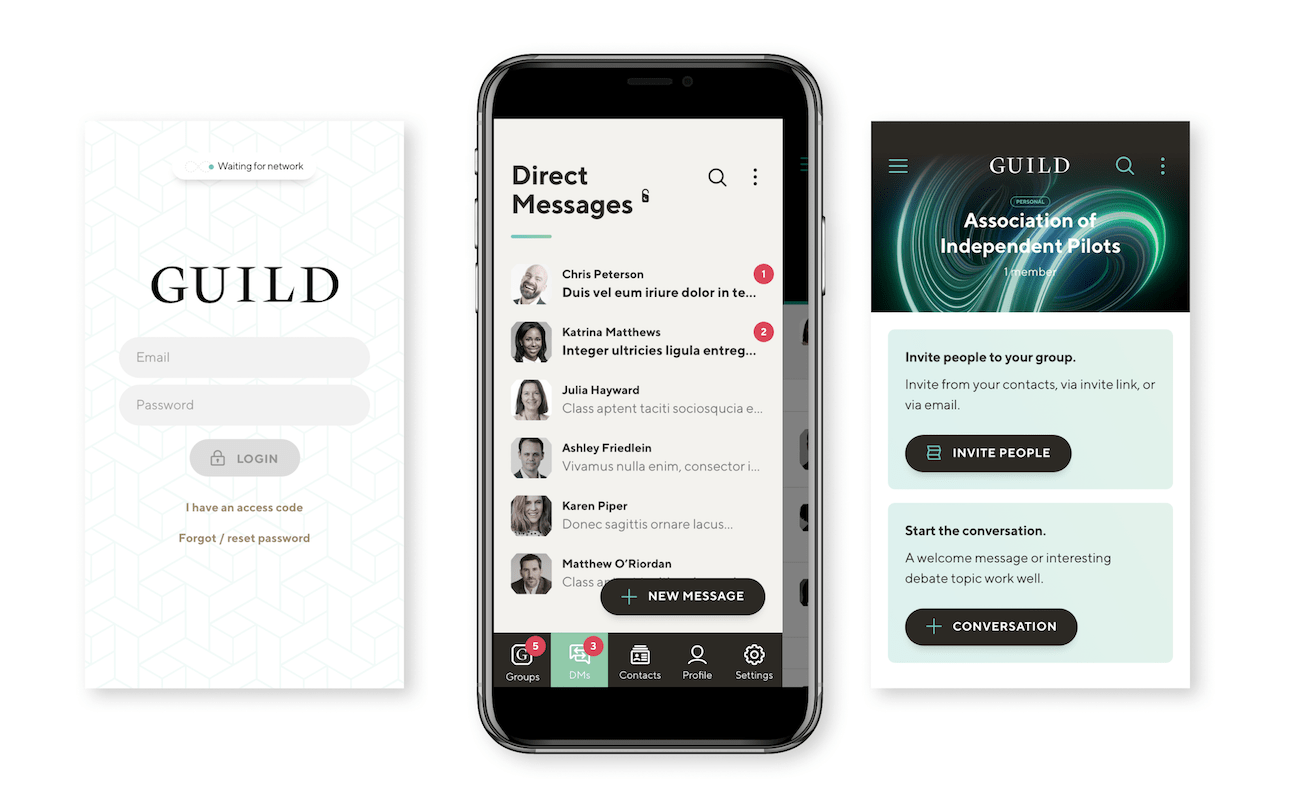 Flutter vs React Native - who's the winner?

We’ve already covered Flutter’s and RN's essential characteristics and how they differ from each other, so one last question remains: what is really the future of mobile development? Is there even a winner in the React Native vs Flutter race?

As always - it depends. For me, Flutter has it all that makes a perfect framework for mobile development although the competition is fierce. I personally prefer Flutter but both frameworks offer many features that can help us develop beautiful looking mobile applications, with a better user experience, and do it faster - letting you save more time and money.

Every application and business idea presents a different case and choosing the right technology is something that should be discussed from the very start with the rest of the team, so that the choice is ultimately made based on the pros and cons of all the solutions taken into consideration.

All you need are the developers who encountered their share of framework-specific issues and can act as you CTO. Consult your idea with us and develop a beautiful mobile application.

1. What are Native, Hybrid, and PWA mobile apps, and which should you choose?

2. Five Proven Tactics to Use in Your Mobile App Marketing

3. iOS vs Android Development for Your Mobile App: Which is Better?

4. Why Our Clients Choose Cloud Hosting for Their Applications

Building a Mobile App: the Step-By-Step Guide for 2022
Written by  Matylda Chmielewska