Being a frontend newcomer compared to other big players in the world of JavaScript such as React or Angular, Vue.js is increasingly used in large-scale projects. The growing maturity of the framework and its considerable ecosystem make Vue capable of meeting even the most demanding project requirements. Now let’s see why Vue is enterprise-ready.

A Bit of Vue

Vue’s first edition was released in February 2014. Though it started small, written by one developer, as the years went on, more and more developers began recognizing the potential hidden in Vue. The community, usage, and ecosystem grew exponentially.

Currently, Vue has a solid base of 263 contributors on GitHub and is rated as the second most used JS frontend tool.

The framework might not have the corporate backing in the form of, for example, Google (Angular) or Facebook (React), still, Vue is supported by Laravel, NativeScript, or Bit, just to name a few of the many sponsors. There’s also the staunch community responsible for Vue’s ongoing development.

Vue’s biggest assets, according to the participants in the 2018’s State of JavaScript. Source: State of JS 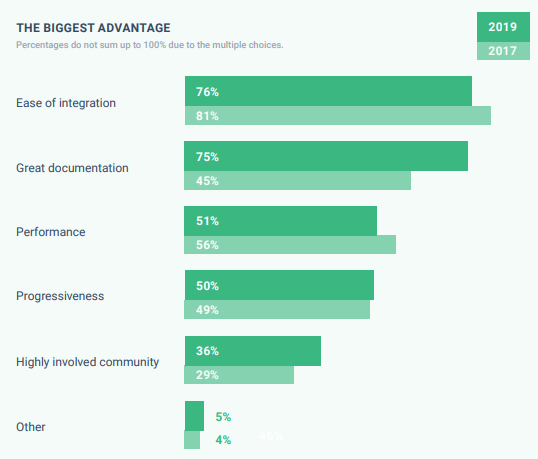 All those elements combined make Vue an appealing choice for enterprise-grade projects, especially at companies that seek quality tools to fill their technology stack.

In fact, software developers and Chief Technology Officers (CTO) participating in our newest report on Vue.js admitted they would very much like to see Vue as an integral part of their upcoming project. 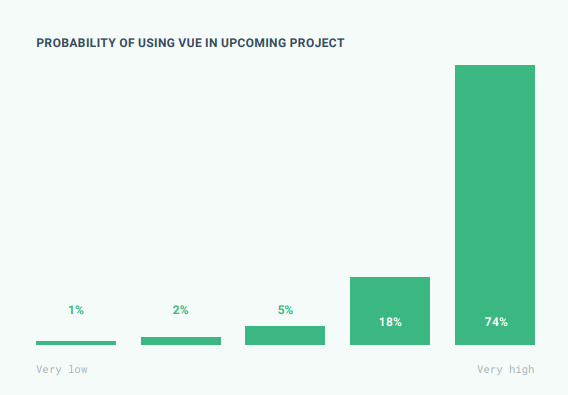 The probability of using Vue in an upcoming project. Source: State of Vue.js 2019

So, theoretically, Vue can pull off large-scale applications, but how do Vue’s capabilities look in real life? Here are a few good examples.

IBM Hybrid Cloud Design is a full-stack cloud-based platform, operating within public, private, and hybrid environments. The department hires over 1,200 people, with 200 on site and 1,000 spread in studios across the globe—all working on designs for more than twenty industries.

To coordinate their work, IBM Design used a Wordpress-based platform, which in time, proved inadequate to meet the growing demands of this thriving department.

Because IBM Design had so many designers, “keeping their work organized and communication smooth was quite the challenge with the team growing and documentation piling up,” says Stephane Rodet, Senior UX Engineer at IBM Design.

Moving Forward, But How?

Every IBM project spans a number of developers, stakeholders, sponsors, clients, and many more. Thus, smooth communication regarding all design aspects of each project is essential to the successful delivery of work. The setup based on Wordpress didn’t provide tools for a fast “exchange of documents, knowledge, and insights.”

As expansion problems and communication issues began amassing, the need for a change became apparent.

We were looking for a cloud-based infrastructure where we could use methods like continuous delivery and automated staging. We wanted to use a platform-as-a-service kind of cloud to simplify our job, to keep our frontend developers focused on the frontend and not caring about the backend or PHP stuff. — says Stephane.

The only thing was to figure out the technology that could fit well into the stack.

Vue to the Rescue

When researching for the “head” to their Wordpress-based CMS platform, Stephane talked over the available possibilities with the team. React seemed too complicated to grasp and Angular too complex for the project. After all, IBM needed a solution that would let designers focus on designing rather than solving the intricacies of the programming framework. Vue’s smooth learning curve along with the component-based structure made the framework a perfect pick for the frontend of the platform.

With CSS, JavaScript, and HTML enclosed together, it would be easier for the team to reuse the code, especially when sharing its parts between designers and engineers.

In the end, the platform’s setup was a headless Wordpress CMS with frontend based on Vue, Vuex, and animations libraries—all put together in Webpack.

The design management system written in Vue and Wordpress helped to improve the critical business operations at IBM Design. As a result, the coordination of all parties involved in a project became organized and efficient.

The addition of Vue to the stack boosted the growth of the platform, allowing IBM Design to enhance its different features and functions.

We stay focused on our design work, educate our stakeholders about our design practice, and showcase the impact and benefits that design can bring to the overall success of products and offerings. — Stephane sums up.

The Chinese e-commerce giant has not only adopted Vue as its go-to frontend solution but also developed Weex—a framework for building mobile user interfaces that is fully compatible with Vue.

Considering the international nature of commerce on Alibaba, the frontend has to give users impeccable experiences. For Alibaba, Vue was a candidate mature and stable enough to deliver.

With almost 20 million monthly entries, WizzAir is one of the more popular low-cost airlines in Europe. WizzAir’s website has an incredible, just under a second, load time. Website’s smooth interactivity and speed were possible to achieve by using Vue as the main frontend framework.

Grammarly is an invaluable tool in the stack of anyone writing in English for personal or professional use. Grammarly’s whole user interface was built with Vue, resulting in a simple but effective online text editor that serves millions of users.

After unsuccessfully trying to overcome maintenance and scalability problems with its former tech stack, GitLab decided to adopt Vue. The transition was incremental but resulted in extending the web application with new features.

The team at GitLab chose Vue precisely because of the traits that make the framework so popular: great documentation, easy learning curve, and simplicity of coding.

This is how Jacob Schatz, Staff Developer at GitLab, commented on the company’s decision to transition to Vue:

Vue works really, really well, when used properly. It turns out Vue isn’t a buzzword, Vue is a workhorse. A lot of our problems have been solved, by us and others. We still have problems, but we now have a reproducible way to write Vue.

To fully gauge the scope Vue’s capabilities, browse through its many use cases at made with Vue.js.

Vue? Are You Sure?

In all the greatness offered by Vue, there are some dark spots that have to be taken into account when deciding to implement Vue in a large-scale project the size of IBM Hybrid Cloud Design.

For Stephane Rodet at IBM, these are “the dependency management, the whole npm, and Webpack side of things. Before we ship things outside, we are required to show proper due diligence of the libraries with their licensing, etc. Consequently, the more dependencies you have in your package.json, the more issues you have to discuss and resolve. This is always a bit of a problem, but it’s not only specific to Vue.”

Also, the State of Vue.js report revealed that one of the biggest doubts about adding Vue to a project is the lack of Vue experience among employees. While this theoretically might be an issue, let’s not forget how easy it is for beginner and experienced frontend developers to start coding in Vue. 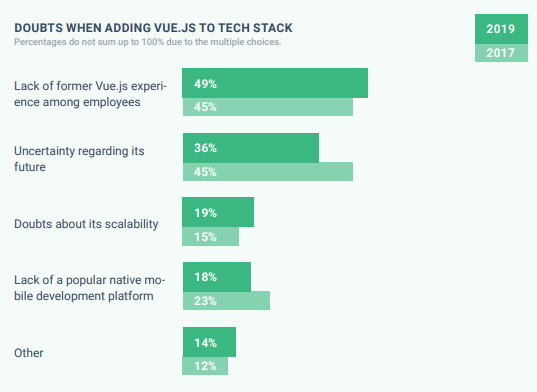 It’s safe to say that Vue is robust enough to stand side by side with the JS veterans. The framework is constantly evolving, delivering new solutions, and polishing those already available. There have been plenty of good things going on for Vue so far, and with such a detailed roadmap for the framework, the situation is likely to only get better.

Enterprise-grade applications are a perfect use case for Vue. By breathing interactivity into static elements while retaining top-notch performance, the framework can really show its potential across a variety of products.

“I think you should go for Vue ... Companies have a guarantee that it will continue to develop, that its licensing is completely safe, which is a major issue for IT companies. Vue is well-documented, transferrable, and lightweight so it helps performance and reduces hosting costs,” Stephane adds.

Mobile App Development: The Guide to Building a Successful Application in 2022
Written by  Matylda Chmielewska