Vue.js is a front-end Javascript framework created by Evan You in 2014. Internally, buzz about Vue started in Monterail in 2015. We were pretty early on the scene.

Over the years we’ve incorporated Vue as a main technology in our service offer, became official Vue.js partners, hosted VueConf 2017, participated in Vuejs Amsterdam 2021, and released 4 State of Vue reports. When we decided to go with Vue, we went all the way. Read more about our experience below.

Being an early adopter can be a bit risky. Sure, there’s the reward of being able to say “we did it before it was cool” but at the same time it means dedicating resources to something not quite proven yet.

The landscape of software development frameworks is always changing and adopting new technologies is inevitable. But jumping on board with the wrong frameworks before they are proven could end up a waste of time if they do not pan out.

Luckily we had Damian Dulisz, a  front-end developer with Monterail at the time. He came across Vue.js back in 2015 searching for a viable alternative to AngularJS and React. After some months of research he decided Vue would fit in perfectly with Monterial’s technologies stack.

Our team had extensive experience with Angular which made picking up Vue a breeze. This is about the time we started to introduce Vue software development into our service line.

Vue.js is very much a community effort rather than the product of a few individual’s efforts. That’s not to short change Evan You, the man behind the code. But there is a whole crowd of developers working hard on a range of developments, refinements, and tweaks.

We embraced the Vue community, and in 2017 we hosted the first ever international Vue.js conference—right here in Wrocław. 17 speakers and over 300 attendees came from around the world to gather and share everything Vue.

We created the first State of Vue report in 2017. The idea was to spread the word about Vue while simultaneously showcasing use cases to potential clients.

We surveyed over 1,100 specialists from 88 countries to find out their experiences with Vue, and what they like and dislike about it most. We dug even deeper, and interviewed six companies on what problems they wanted to solve with Vue.js.

2019 and 2021 versions of the report have been released since. Interviewing more developers, experts, and providing case studies and interviews from our own clients. The beer in the picture was brewed in Wrocław and sent out as part of a thank you package to some contributors of the most recent report, State of Vue 2021.

2021 was a big year for Monterail and Vue. Not only did we release another version of the Stateof Vue report, including a separate Vue for Business report, we also presented at the Vuejs Amsterdam 2021 conference.

It was awesome to take part in such a huge conference and to be honest there were a lot of firsts for us. Camera equipment, recording and editing, presenting remotely at a conference is not without its challenges.

Our very own Tomasz Kania-Orzeł presented alongside Evan You himself and other expert panel members in a discussion about the future of Vue.js. Artur Rosa and myself also contributed in part of the video presenting the findings of the SOV2021 report.

Vue.js in our Project Development

Since adding Vue.js to our official technology stack we have had plenty of opportunities to utilize it in partnership with our clients. It’s proved to be a wonderful framework appreciated by both clients and developers alike. With several projects under our belt already and the promise of more in the future, embracing Vue.js has proved to be a good decision in the long run.

To the Future with Vue

It’s been a great ride with Vue so far and we’re looking forward to the future. Thanks to the community, Vue is always growing and getting better, providing a faster, better, and wider scope of solutions. After all, it’s always better to be an early adopter than a laggard! We couldn’t be happier with Vue and what it has allowed us to do as software developers and digital product creators. 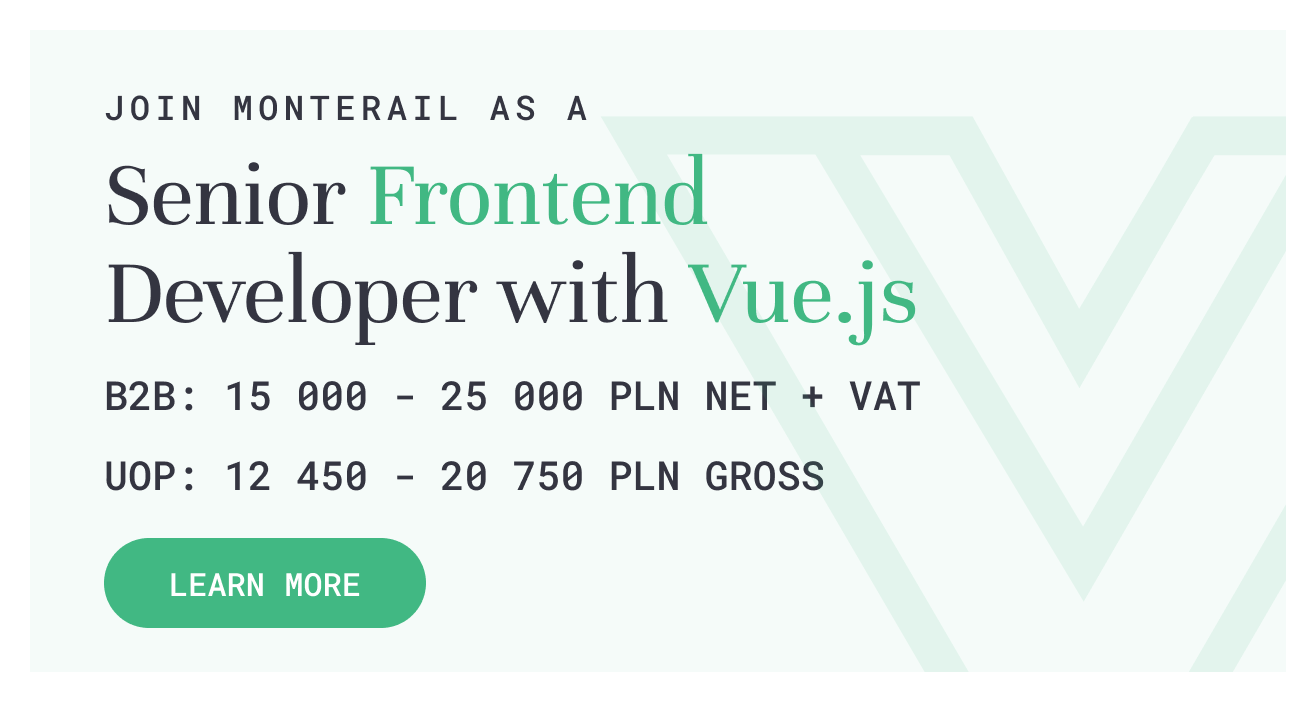 What Should You Know About Your First Days At Monterail?—The Onboarding Process
Written by  Zuzanna Forell

A Developer's Perspective: Working at a Software Development Agency vs a Digital Product Company
Written by  Antanina Goltstein

Why Do We Need More Women in IT?
Written by  Katarzyna Tatomir-Rebeś