Earlier this June, we introduced the possibility of taking a sabbatical, available to all employees. A paid, extra month-long leave for anyone reaching their five-year mark with the company, which they can spend in any way they see fit. Dreaming of a road trip across Europe? No problem. Need time to touch up a new house? Perfect. Want to hole up in a cabin in the woods with a pile of books? Why not. We don’t interfere and there are no loyalty provisions attached.

Sabbaticals are quite popular in the US and offered by corporations like McDonald’s, Deloitte, Adobe, Accenture or Microsoft—and frankly, the arrangement may be a kind of a necessity. American labor law does not require employers to provide either paid or unpaid vacation leave. In Poland, on the other hand, where every employee is granted twenty or twenty-six days of mandatory annual vacation days, a sabbatical is still a rare thing. So why did we implement a solution like that?

Below, you'll find a brief outline of the story behind the decision, details from our internal feasibility study on the subject, and the ins and outs of the implementation process. And yes, I’ll also be answering the most frequently asked question about sabbaticals, namely “How does it pay off for the organization?”

The truth is, we’ve been thinking about an arrangement like that for years. The idea of implementing sabbaticals at Monterail dates back to around 2013, when I first watched Stefan Sagmeister's TEDx talk "The power of time off." Inspired by his story, his approach to work-life balance, and his focus on resilience and longevity, I shared it with Monterail co-CEO, Szymon Boniecki. While we took an immediate liking to the ideas outlined in the talk, I knew that we would need to wait a few more years to make the sabbatical a reality at Monterail.

Halfway to our ten-year anniversary, we began asking ourselves serious questions about the company’s future. On the one hand, there was a tempting vision of an ever greater market share, skyrocketing growth, monopolizing the market. On the other hand, however, there was longevity—creating an organization to last decades rather than mere years. As we both consider longevity a superior value, the latter option won out. The idea of longevity drives us, and we use phrases like long-term in our day-to-day operations so frequently, they almost sound like mantras.

We also keep saying that we want Monterail to be a healthy organization. We focus on long-term relationships with both our team members and our clients.

So, introducing sabbaticals ultimately felt like walking the walk.

Unfortunately, adverse results of this unusually close approach involve a high risk for burnout, itself a well-diagnosed and unavoidable phenomenon in creative work. Although we use a plethora of tools in the company to combat it in our day-to-day efforts (Monterail employees can work on their own projects, changing their career path, work remotely, work flexible hours, etc.), sooner or later everyone falls prey to burnout. We did, too.

I have gone through this cycle many times. From absolute excitement about what we do every day to the need for complete mental isolation from everything related to work. Many people have been working with us for a long time. And even a few years spent in a creative industry almost always means increased risk of burnout. While ours is an ‘always-on’ culture, a large part of what we do happens outside of what we see as a work environment. Ideas pop into our heads during a walk or in the shower—sounds familiar? How does a creative mind draw the line between what's work and what isn't? What allows you to truly relax is breaking away and turning off mentally.

What finally encouraged us to implement the concept was the way Monterail was being positioned as an employer. When we opened our beautiful office in downtown Wrocław a few years back, we offered our employees a range of benefits such as free lunches, fresh fruit and vegetables, or in-office entertainment. All of these have since become standard practice, especially in IT. Offering additional, sometimes over-the-top benefits aimed at keeping employees longer at the office didn’t exactly suit our vision of long-term and healthy growth. This, in turn, led us to ponder the alternatives we could potentially offer to our current and future employees.

We liked the idea of giving people time as a bonus. Often enough, when working long stretches, people start to think that they don't need that much rest. As they receive financial bonuses for their efforts, they plan their next purchases: a new bicycle, a new TV, etc., and the list of "needs" never ends. From an organizational standpoint, that might be a problem—locked into such a vicious cycle, people burn out, their productivity falls drastically without rest, and their job satisfaction soon follows suit.

Besides the risk for burnout, we noticed another phenomenon. After a few years spent working in the same place, people often feel the need to change something. And while changing jobs usually seems the only viable option, what these people may really need is to take a longer break. Sabbaticals are supposed to address this need. We want to nip burnout in the bud. 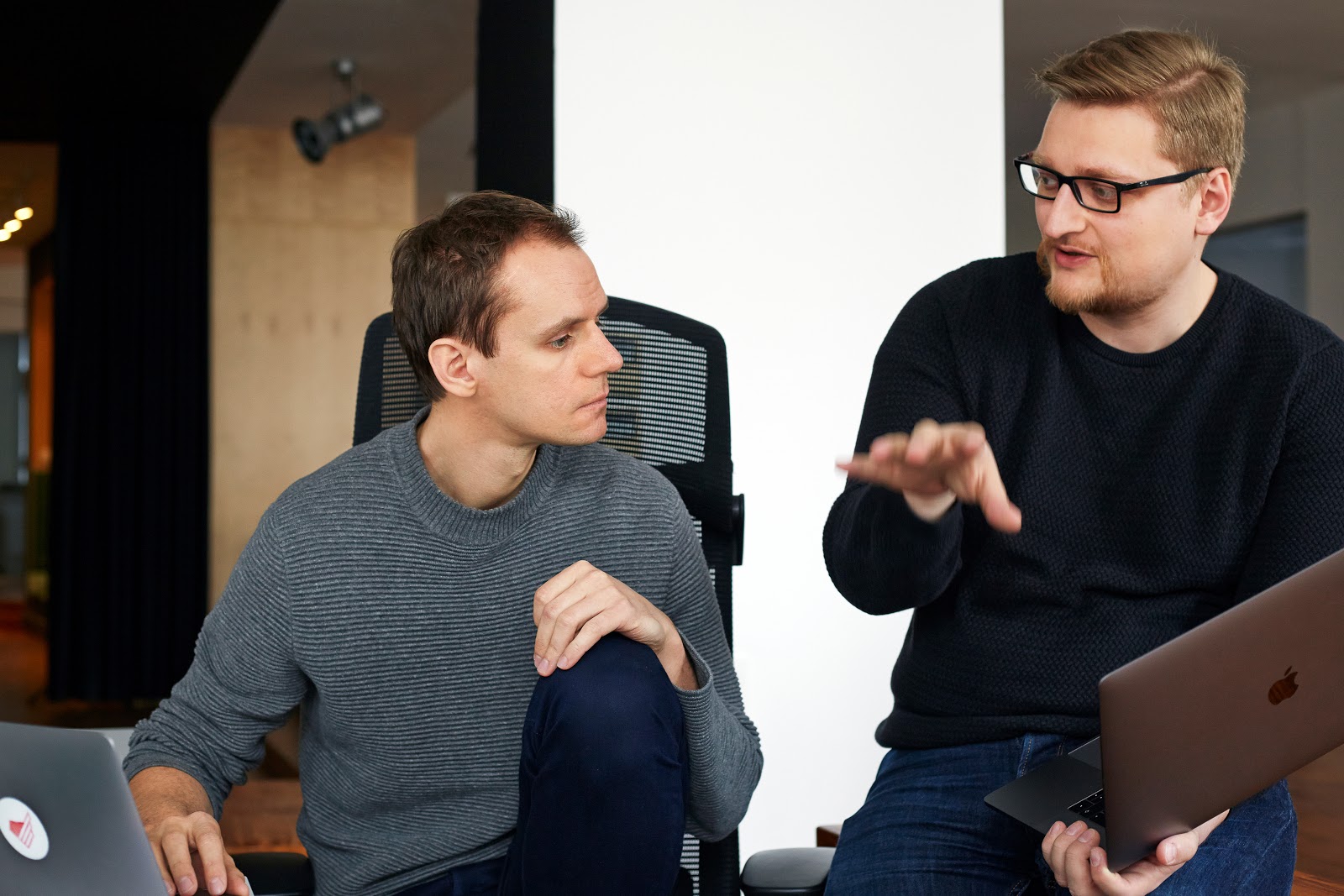 Szymon and I discussing the sabbatical concept

The shape of our sabbaticals initiative has been more or less outlined for years, but we only kicked it off in early 2019. Why the delay? The maturity of our organization in terms of structure and key processes has finally reached a high enough level. In practice, this means that every person serving in a key role in the organization has a replacement ready. In case of a longer absence, the company will continue to operate smoothly and no one will be overburdened with someone else’s responsibilities. This year, we also reached a record number of people coming up on five-year job anniversaries, which meant that our sabbaticals concept could go live immediately. It was more than just an aspirational initiative—we were truly committed.

We started the implementation with creating a schedule and holding regular meetings with our People, Finance and Operations teams. They conceptualized our ideas. The biggest challenge in the process included defining the specific shape of the sabbatical. Several options were created: of various length, fully or partially paid, tailored to different job seniority levels. The driving principle was making the mechanism as simple as possible. Finally, we agreed on a month-long, fully paid leave, available to everyone with five years at the company. We wanted to avoid a situation in which people wondered whether taking a sabbatical would affect their personal budget and calculate whether they can “afford” it.

The most frequent question to appear when sabbaticals come up in a conversation is "But how does it pay off?"

Well, before doing any work on the project, we conducted a feasibility study. Step by step, we checked who exactly would be entitled to a sabbatical across the company and how many people would that be. Compiling detailed calculations and modeling scenarios, we were able to forecast the impact of introducing our sabbatical policy a year and five years down the line. Discussing edge cases was also an important part of the process. That meant tackling questions like “What will happen if someone goes on sabbatical and then puts in their notice right afterwards?” Well, nothing. We keep that possibility in mind, but it was decided early on that that no punitive action would be taken with respect to anyone making such a decision.

So after some hard work and countless late-night talks with Szymon, we announced our new sabbaticals policy at our weekly company-wide gathering, calling it the “Hi!5 leave” in tribute to Monterail’s own five-year anniversary (that’s what we called the anniversary celebrations back then). We knew that there would be no turning back after the announcement. The sabbatical is a form of the debt that the organization has incurred and needs to repay but this commitment is something that exactly illustrates Monterail values.

"Decisions like these is what makes running a business worth it."

When discussing solutions that contribute to building a good organizational culture, the question of measuring their effectiveness always comes up. In a matter as subjective as this, it’s rather difficult to suggest simply tracking quantitative metrics and quantifiable effects. A relatively small size of the sample doesn’t encourage statistical analysis, either.

We know it might never be possible to draw a straight cause-and-effect line between our introducing sabbaticals and some change in the company’s performance results. But that was never the point of the whole exercise.

We wanted to promote a more humane approach to employee wellbeing and enrich our company culture. We always say that we value long-term relationships. Sabbaticals are the „walk the walk” part. Their purpose is to show appreciation to people who are with us for the long run. And we’re very curious to see the company-wide implementation and how it all will look like in practice.

Regardless of what the future might hold, responses from the market, various communities, and the press—not to mention Monterail team members—led us to believe that we made the right decision. The feedback from individuals and on social media outlets was overwhelmingly positive.

"People congratulated us and praised us for the move, I was even asked a couple of times whether we had any job openings because our new policy convinced them to try us out as an employer. It’s also reshaped our recruitment experience, as candidates mention sabbaticals during job interviews all the time—it’s become a competitive advantage for them. What I’m most glad about, however, is that right now it seems that our hypothesis about the benefits of focusing on the long-term might have been true, and this commitment has become attractive to employees as well." - Szymon says.

Naturally, Monterail team members with enough years on the job under their belts began to think about their sabbaticals the moment they policy went live. I could hear some heated discussions in the company kitchen about planned directions and ideas as to how to spend four weeks off from work.

The first people to take their leaves have already returned from their sabbaticals. UX designer Marzena Kawa spent two months in Italy exploring the country, learning the language, and immersing herself in the culture. She summed up her sabbatical as "a time of high-quality rest, planned boredom, and doing things that would not have been possible otherwise." That’s just a little snippet of her first impressions—a longer piece on her incredibly interesting journey will be coming up on the blog soon.

In lieu of a recap—the idea for sabbatical has been growing inside for a long time, and we never lost faith in its potential. And now, watching the sabbatical policy becoming a real benefit for Monterail and seeing it reshape the employee experience, is definitely the best reward. It’s worth running a business for such decisions. But that’s definitely not our last word when it comes to building a modern organization and creating a culture focused on longevity. We may just be starting out—but we’re here to stay.

Want to work at Monterail?

We are a team of specialists working with passion and sharing the knowledge to build beautiful and meaningful software. If you feel these values are close to your soul– join us!

Check our career page and apply directly for a vacancy that you find most appealing.

KBM a.k.a Knowledge Base Monterail - What is it and how does it work?
Written by  Wiktoria Krzyż

The Biggest HR Tech Conferences in 2022
Written by  Maja Nowak