What is Node.js and Why You Should Use It For Enterprise Software?

Everyone's talking about Node.js taking over the programming world and its great advantages. While all frameworks and languages come with some benefits, it's Node.js that takes over development in enterprises. The big question is...

Why use Node.js and has it become a standard for large-scale applications?

In this article, I will give you a high-level look at this subject, covering everything from general Node.js usage to why Node js is used in enterprises. 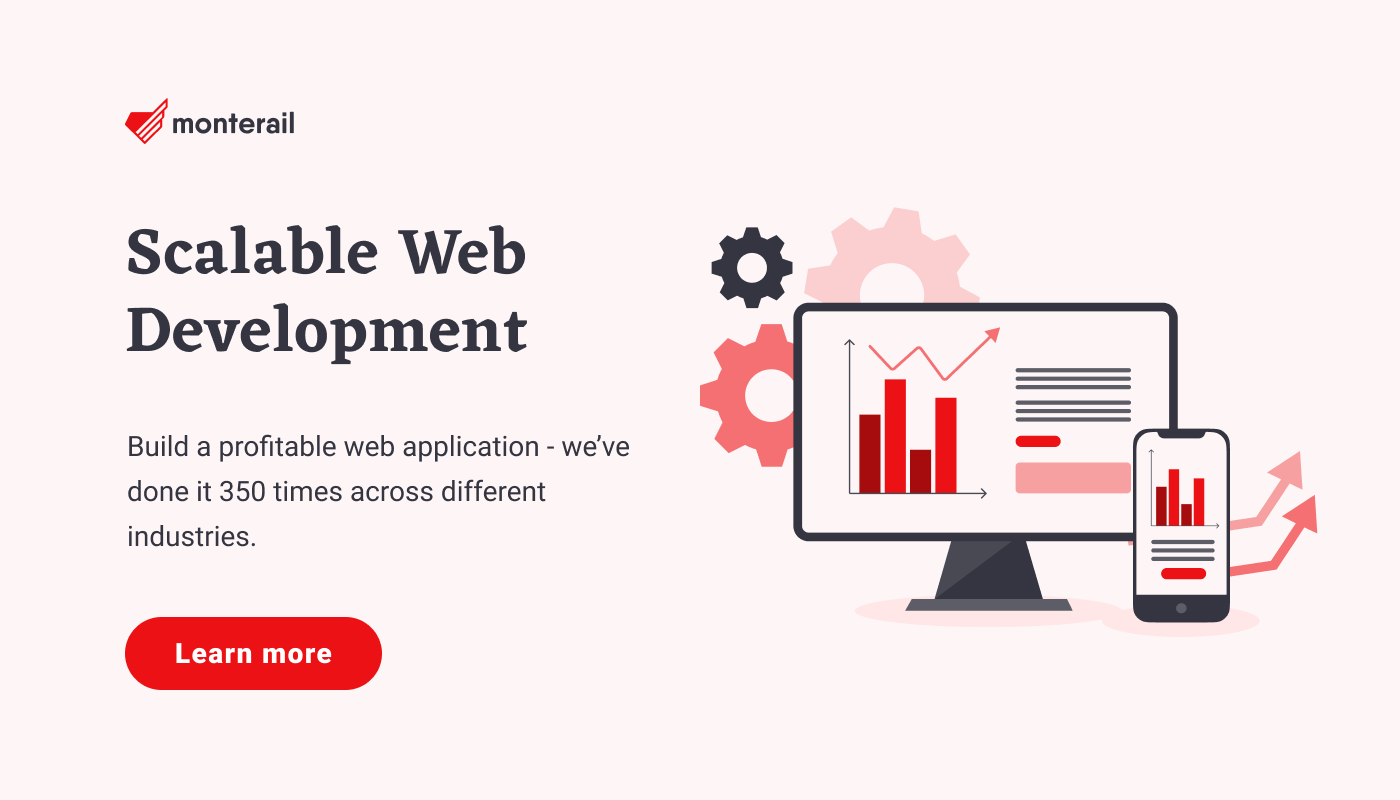 If you want to see some examples of what Node.js is used for, there're plenty of well-known enterprise-level Node.js implementations.

It’s hard to escape the gravitational pull of JavaScript and its ubiquity in modern Web development. While it’s been offering great frameworks and libraries for creating interactive, modern interfaces for many years now, it never did deploy any backend platform that could compete with other well-established languages. Node.js, however, the cool kid on the JavaScript block, has come to offer a viable alternative, one that has since been embraced by multiple startups and enterprises.

Development with Node.js lives up to its opinion as the new standard for enterprise applications. Some even claim that it’s so powerful that it has the potential to replace Java for good—dethroning it as the most trusted language, a spot that Java has held since 1995.

Seemingly every month now, another enterprise-level company reveals that it’s been successfully using the platform in its operations. As of today, the list includes giants such as Walmart, NASA, Intel, and Twitter. Many others decided to rewrite their existing code to Node.js to boost their teams’ productivity and increase the performance of their applications. According to the Node.js User Survey (last available in 2018), 43% of Node.js programmers claim to have used it for enterprise apps.

What is so special about Node.js that so many Fortune 500 companies use it? Why use Nodejs in dynamic, high-stakes environments?

Well, the answer to those questions is just as complex as the enterprise apps built with Node. So I’ll try to give you a short explanation (which will still be kinda long).

What is Node.js and What Are Its Advantages?

In case you're wondering "what is Node.js?" It's a JavaScript runtime environment that allows the infrastructure to build and run an application. It’s a light, scalable, and cross-platform way to execute code. It uses an event-driven I/O model which makes it extremely efficient and makes scalable network applications possible.

With more than three billion downloads as of 2022, Node.js thrives in building real-time applications, the Internet of Things, and microservices. It’s gaining traction faster than any other technology and ranks in lists of top most-in-demand developer skills.

The most important advantages of Node include:

Why Use Node.js On an Enterprise Level?

Any programming language will give you some reasons to choose them over others.

The thing about Node.js is that it was developed for applications at scale. Modern tooling and its embrace of the forward-looking way of developing complex applications make Node.js stand apart from other programming technologies.

Node.js is built upon Google Chrome’s V8 runtime—written in C++, built for multiple operating systems, and super fast. Both V8 and Node are frequently updated, with performance boosters, security patches, and support for modern JavaScript features. The use of JavaScript also means that transforming JSON data—the most common data interchange format on the Web—is fast by default.

The single-threaded, event-driven architecture of Node.js allows it to handle multiple simultaneous connections efficiently. Most of the popular web platforms create an additional thread for each new request, using up RAM for the whole time it takes to process it.

Node, on the other hand, operates on a single thread, making use of the event loop and callbacks for I/O operations, delegating tasks such as database operations as soon as possible. This allows it to handle hundreds of thousands or even a million concurrent connections.

What’s more, Node.js embraces app scalability from the get-go, with powerful features such as the Cluster module enabling load balancing over multiple CPU cores. Robust tools, such as the PM2 process manager, make it even easier to monitor, optimize and deploy Node applications.

What is Node.js Used For in Enterprises?

Combining Node.js with a microservices pattern

Every project starts out small. Or with the MVP release, if you prefer.

But as time flies, it starts being more than a remedy for one problem. It continues to grow, gaining new features and users with high expectations (but not enough love to be overly forgiving).

Without even noticing, you may end up with a huge project that your development team struggles to cope with.

Soon, you will probably need to add new features while still providing a top-notch performance to your users. But as it gets more and more complex, introducing new changes and adding features becomes a nightmare.

This is a common problem among enterprise applications.

Obviously, one feature will be used much more often than the other two, with some people even going as far as only using the CMS part of the app while ignoring the rest. As your user base grows, more computing power will have to be added to the servers in order for your app to work properly and not crash.

The best way to solve that would be to scale just the CMS part. After all, the other two deal with the traffic loads just fine, right? Such an approach, however, is impossible with monolithic apps, and eventually, you’re forced to scale the whole system.

Moreover, with all the complexity, the app often becomes difficult to handle, the deployment becomes a real pain, and the whole team gets too big to coordinate their work in an efficient manner.

The answer to this problem is the microservices pattern.

According to Max Stoiber, an open-source developer:

A micro service is a single self-contained unit which, together with many others, makes up a large application. By splitting your app into small units every part of it is independently deployable and scalable, can be written by different teams and in different programming languages and can be tested individually.

That also means you can run separate outsourced and in-house teams in Poland, India, and the US, and they can work independently on different parts of the same app.

Smaller, distributed teams are much easier to work with, plus, you don’t have to deploy the whole codebase every time you want to introduce some change in one part of your app.

There are a number of well-known enterprise-level companies that have already embraced the power of Node.js and microservices, a perfect combination for better performance, less code, and efficient deployment. PayPal, Netflix, and GoDaddy are just a handful of them.

Contrary to a skill-set silos teams, in a cross-functional team, every member is responsible for the entire lifecycle of the app: writing code, testing, hosting, deployment, and maintenance. Teams like that are made up of experts in all the relevant areas: front- and backend developers, infrastructure engineers, and quality assurance experts.

This approach, popularized by Agile advocates, is quite common in startup circles, as most startups have limited workforces at their disposal. But with the microservices mindset in place, it’s also within the reach of enterprises and should be encouraged for better agility, innovation, and smoother collaboration.

There’s no place in there for “This ain’t my job” sentiments—everyone’s working towards the same goal, providing their own perspective on the problem.

In reality, some parts of the app may require a greater focus on the client’s side, while others will require server-side focus. Full-stack developers who know JavaScript can use it for both. Your coworkers’ days off are also less of a problem as some other dev can simply step in to pick up the slack when needed.

As Node.js is rooted in JavaScript, it fills the gap between frontend and backend skills for developers, which means they can act as full-stack devs without having to learn additional languages.

The Node Package Manager, known as an npm, allows programmers to install, update, and use smaller open-source software packages (modules), which means they don’t have to write common features from scratch and can avoid new layers of complexity that often come with that particular territory.

Given that privacy and security are often the biggest concern for enterprises, npm released the Enterprise version of its package manager.

As big organizations may be wary of storing their data in the cloud (especially government organizations, as well as those working in fields such as fintech or medtech), npm Enterprise allows you to run npm's infrastructure behind your company's firewall. It gives businesses access to a private registry with advanced security features to help them control access to code, identify vulnerabilities, and automatically replace unsafe code.

According to the npm blog:

Many enterprises have strict requirements that prevent them from using cloud-hosted products for critical parts of their infrastructure. This approach makes sense from a regulatory compliance perspective, but it makes life inconvenient for developers within those companies who wish to take advantage of open-source code from the npm Registry, or who wish to use npm to share and reuse their own code with their colleagues.

Platforms like Electron or NW.js let you build cross-platform desktop apps with Node.js.

That means you can use some of the code from your Web app in its desktop versions for macOS, Windows, and Linux. Moving forward, the same team working on your Web app can deliver a desktop app without having expert knowledge of C#, Objective-C, or any other language required for building native apps.

Another advantage of Node is that developers have access to the same great tooling as front-end developers—such as Google Chrome Developer Tools—enabling them to debug and profile backend and desktop apps as efficiently as client-side apps. The majority of Node developer tools are also cross-platform, which means that developers don’t need a Mac to write, debug and build a macOS app, or a Windows machine for Windows apps.

Highly innovative enterprises already know that Node.js is currently the best way to improve performance, coding efficiency, and overall happiness in their teams.

Although Ruby on Rails is our mother tongue, a huge part of our Web development revolves around JavaScript frameworks—Vue.js, AngularJS, React for front-, and Node.js for backend.

Our developers see this as an opportunity to become full-stack experts and have been very impressed with all the possibilities that Node.js brings to the table. And I see no reason why you shouldn’t be, too.